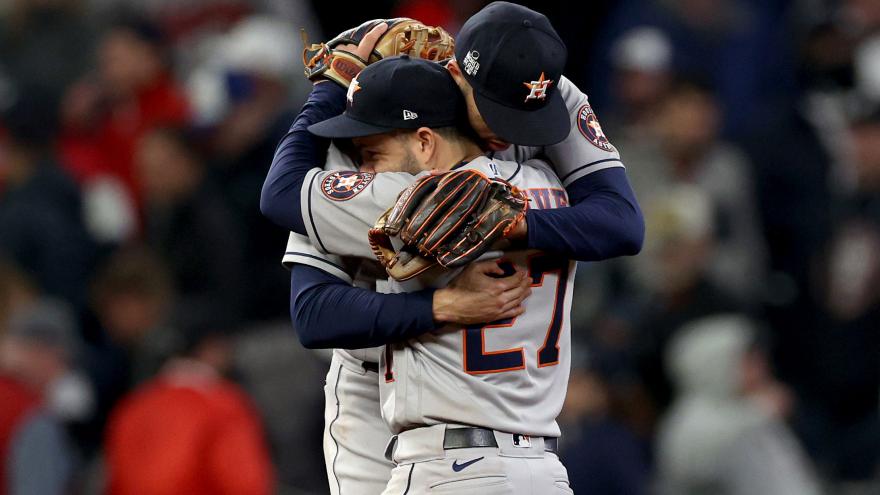 (CNN) -- The Houston Astros kept their dreams of a World Series championship alive after beating the Atlanta Braves 9-5 in Game 5 on Sunday.

The Braves, who still lead the series 3-2, would have clinched the title with victory in front of their home fans but faced a revamped Astros batting order that looked determined to extend its season.

Houston veteran manager Dusty Baker's decision to switch things up was vindicated after shortstop Carlos Correa, bumped up to third in the batting order, came through with three hits and a pair of RBIs.

Meanwhile, first baseman Yuli Gurriel, who moved up to fifth after hitting seventh in Game 4, had three hits of his own and scored two runs. In total, the Astros tallied a dozen hits.

"We don't worry about what other people say or what they think. It's what you think of yourself and what you think of each other on the team that really counts," Baker said after the match, when asked about those who had counted them out of the series already.

"These guys are together, they've been through many of these battles and so they don't know how to quit and they are always looking for an edge or an opening.

"Fortunately, tonight we took advantage of some."

The Braves, seeking their first championship since 1995, opened the scoring in explosive fashion with Adam Duvall hitting a grand slam in the first inning.

But the Astros quietly chipped away, ultimately drawing even at 4-4 after a Gurriel groundout in the top of the 3rd.

Veteran first baseman Freddie Freeman then put the Braves back in front, launching a massive 460-foot home-run into the seats.

Freeman's blast marked the longest home run by any player in the 2021 postseason, but it also represented the host's final scoring play of the evening.

Houston, however, were far from done and scored three times in the top of the 5th, with pinch-hitter Marwin Gonzalez's two-out, two-run single giving the Astros their first lead of the game.

The Astros then added an insurance run in the seventh with catcher Martin Maldonado's third RBI of the night, and one more in the eighth with Correa's single which plated second baseman Jose Altuve.

The loss marks the Braves' first defeat at home this postseason, and if Atlanta is to win the World Series, they'll be forced to do so in enemy territory.

Both Game 6 on Tuesday, and if necessary, Game 7 will be held in Houston.

"You always love to do it here. I'll take it anywhere," Braves manager Brian Snitker said on missing the chance to clinch the series in front of home fans.

"I don't care where we're at. If we win the World Series, it doesn't matter where it is. I'd have loved to have done it in front of our fans.

"Hopefully, we can do it the next couple of days."

With the latest win, the Astros will be hoping to lean on their home crowd to become just the 15th team in MLB history to rally from a 3-1 deficit and win a best-of-seven postseason series.