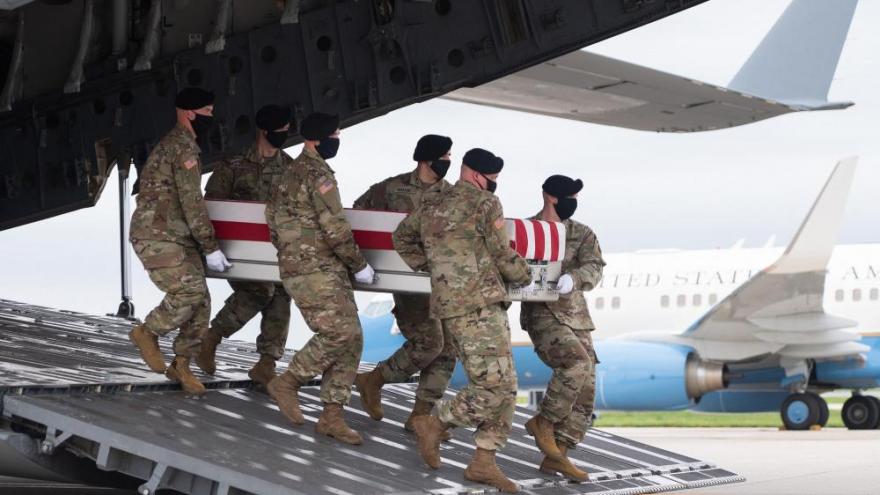 The House of Representatives on Monday unanimously passed a bill that would posthumously award the Congressional Gold Medal to the 13 US service members killed in the August terrorist attack outside Kabul's airport during the US evacuation from Afghanistan.

(CNN) -- The House of Representatives on Monday unanimously passed a bill that would posthumously award the Congressional Gold Medal to the 13 US service members killed in the August terrorist attack outside Kabul's airport during the US evacuation from Afghanistan.

The bill now heads to the US Senate for approval before it can reach the President's desk.

"The American servicemembers went above and beyond the call of duty to protect citizens of the United States and our allies to ensure they are brought to safety in an extremely dangerous situation as the Taliban regained control over Afghanistan," the legislation says.

The service members were among the dozens killed in the suicide bombing attack outside the Hamid Karzai International Airport on August 26, which ISIS-K claimed credit for, as the US scrambled to evacuate its citizens and Afghan allies out of Afghanistan following the Taliban's takeover of the country.

Republican Rep. Lisa McClain of Michigan, the bill's main sponsor, urged the Senate to quickly pass the bill "so we can properly honor these fallen servicemembers." The Senate introduced a similar bill in September that has more than 50 sponsors.

"These 13 fallen warriors, along with many others, made the ultimate sacrifice," McClain said in remarks ahead of Monday's vote.

"While we as a nation grieve for the service members we've lost, we often forget about the families who have lost even more. To be a Gold Star family is an honor no one wishes for. We owe our sincerest gratitude to the families who eagerly awaited these 13 service members' return. These families bear the greatest burden of their loved ones' sacrifice, and we can never thank them in a way that will make up for their loss. Awarding the Congress' highest honor is a small token of our appreciation."

The 13 service members were identified as: