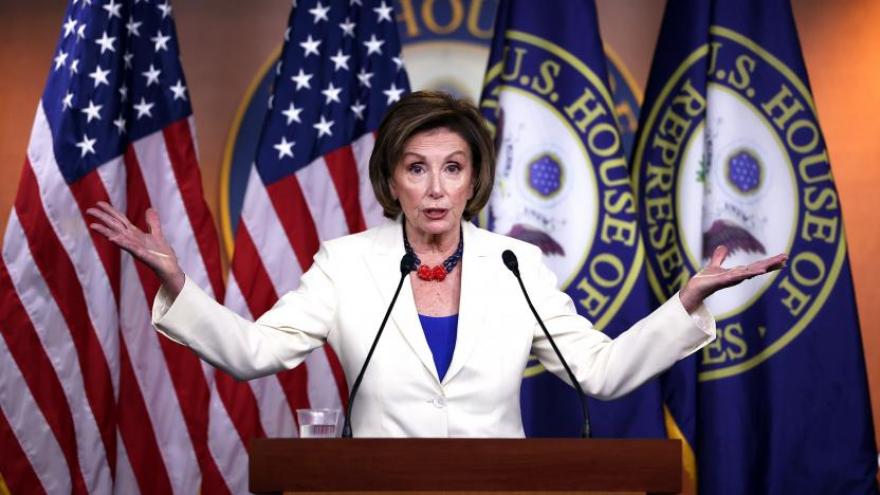 The House is voting to create a select committee that will investigate the deadly January 6 attack on the US Capitol. Pictured, Speaker of the House Nancy Pelosi at the U.S. Capitol on May 20, in Washington, DC.

(CNN) -- The House voted Wednesday to create a new select committee that will investigate the deadly January 6 attack on the US Capitol, in a vote falling mostly along party lines that signals the political fight to come over the panel's examination of the insurrection.

The House voted 222-190 to formally create the select panel. Just two Republicans joined with Democrats to support its formation -- Reps. Liz Cheney of Wyoming and Adam Kinzinger of Illinois.

"We cannot wait," Pelosi said Wednesday. "We believe that Congress must in the spirit of bipartisanship and patriotism establish this commission. And it will be conducted with dignity, with patriotism, with respect for the American people, so that they can know the truth."

Pelosi made the move to establish the committee after Senate Republicans blocked the formation of a bipartisan commission to investigate the January 6 attack.

"Our bipartisan, good-faith proposal was met with a filibuster. Now that Senate Republicans have chosen to block the formation of an independent commission, it falls to the House to stay the course and get the answers they deserve," said House Homeland Security Chairman Bennie Thompson, who is one of the potential candidates to chair the select committee.

Republicans charged that the select committee envisioned by Democrats was merely a partisan panel that would be used to attack former President Donald Trump. While 35 Republicans voted in favor of the bipartisan commission legislation, nearly all GOP lawmakers opposed the select committee, including most of the 10 Republicans who voted to impeach Trump in January.

"I supported a bipartisan independent commission. This is the opposite," Rep. Anthony Gonzalez, the Ohio Republican who voted to impeach Trump and was the target of the former President's rally over the weekend, told CNN before the vote.

Now the question falls to how House Minority Leader Kevin McCarthy will approach the new committee. The California Republican has declined to answer questions this week about who he might appoint to the committee -- such as those who voted to overturn the election or have downplayed the violence on January 6 -- or whether he will appoint Republicans at all.

After the vote, McCarthy still refused to say if he will cooperate and offer up members to serve on the committee, telling CNN, "It seems pretty political to me." He did not respond when CNN asked if that meant he would not appoint anyone.

Under the House's resolution, Pelosi will appoint eight members to the commission and McCarthy has five slots "in consultation" with Pelosi -- meaning the House speaker could veto his selections.

Asked Tuesday if she would consider vetoing McCarthy's selections if they had voted to overturn Biden's win, Pelosi said, "We'll see. We'll see who they nominate."

If she does appoint a Republican, it's likely to be either Cheney or Kinzinger.

"If I'm asked to serve on it, I'm going to consider it. I haven't been asked," Kinzinger told a local TV station Wednesday. "It's not necessarily anything I look forward to doing, but if I thought my voice was needed to get to the bottom of it, it would be something I would be open to."

Pelosi would not say if she has decided to appoint a Republican to the select committee when speaking at a news conference ahead of the vote.

"I will be making whatever statement I make about the select committee when I do and that is not right now," she said.

New York Rep. John Katko, the top Republican on the House Homeland Security Committee who negotiated the bipartisan agreement for the independent commission, criticized the select committee on Monday and said he did not envision serving on it if he was asked.

As members of Congress debated the select committee, officers injured during the January 6 attack listened from the gallery.

"Glad that it passed but surprised by how close it was," Dunn told CNN after the vote. "I think we have a lot more coming together to do as a country."

Fanone said he was "shocked but not surprised" by the vote. "I mean 190 votes against a special committee? Again, like I understand the political argument here, that it's a special committee and it's political in nature. I see the speaker as having exhausted every other means of investigating (the) January 6 insurrection. What was she left to do other than to ignore it, which is just not enough."

Speaking with CNN's Don Lemon on "Don Lemon Tonight" later Wednesday, Fanone lamented the Republican Party's loyalty to Trump as he stressed the need for a full accounting of the Capitol attack.

GOP lawmakers, he said, have been given "ample opportunities to have an exit ramp from the previous administration, and they've chose to embrace that administration -- and doing so on the backs of hundreds of police officers that responded to the insurrection, which was incited by that President and his supporters on January 6."

The two Republicans who backed the select committee, Kinzinger and Cheney, say they would have preferred the bipartisan commission to the House-led panel, but they argued that a thorough examination of the January 6 insurrection was necessary.

"I believe this select committee is our only remaining option. I will vote to support it," Cheney said in a statement explaining her vote.

"As I have said, I believe a bipartisan independent commission is the best approach — and although the House was able to pass the measure, it was blocked by the Senate. Today, I voted in support of the Select Committee because the truth matters," Kinzinger said in a statement after the vote.

The House's select committee is expected to investigate both the security failings of the January 6 attack -- when pro-Trump rioters breached the Capitol and disrupted the certification of Joe Biden's November 2020 victory -- as well as the circumstances leading up to the attack. That's likely to include an accounting of former President Donald Trump's role spreading lies about the election being stolen, as well as some Republican lawmakers who supported efforts to overturn the election. The committee could also examine McCarthy's conversation with Trump by phone as the attack was unfolding.

Thompson, who is seen as possible chair of the select committee, told CNN that evidence-gathering from members of Congress -- including McCarthy -- will be critical to gathering evidence by the select committee. He said hearing about McCarthy's call with Trump is "part of the evidence necessary to produce a report."

Democrats say that Republicans left them no choice to move forward with a select committee after Senate Republicans blocked the independent commission and some Republicans have downplayed the violence that occurred during the deadly January 6 attack.

Besides Thompson, whose committee has already been investigating the riot, another possibility to chair the committee is House Administration Chairwoman Zoe Lofgren, the California Democrat whose panel has also probed the insurrection.

This story has been updated with additional developments on Wednesday.