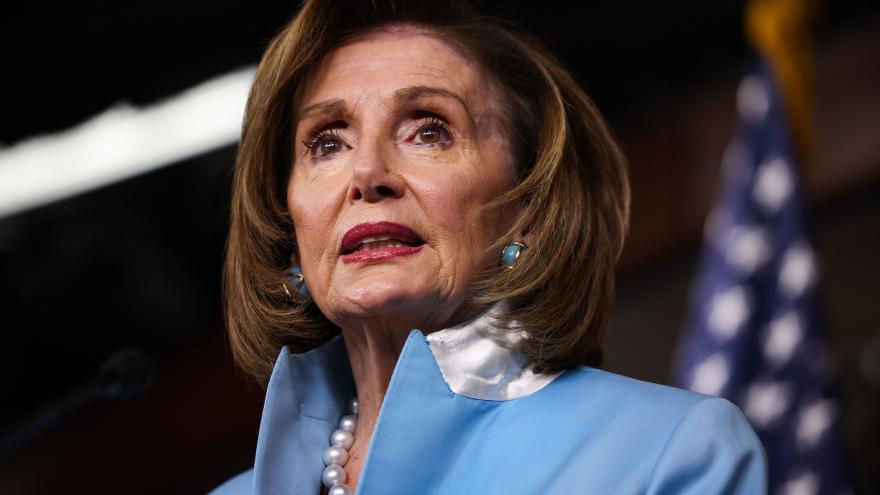 (CNN) -- The House will vote on a ban of assault-style weapons Friday, separating packages on gun control and policing laws that had been entwined, House Speaker Nancy Pelosi announced Friday, after failed negotiations within different factions of House Democrats prevented leadership from being able to pass the bills together.

While the House could pass the bill, the ban is not expected to advance in the Senate, where most legislation must amass 60 votes to overcome a filibuster. Still, many Democrats have cited a string of recent mass shootings involving such firearms as a pressing reason to outlaw them.

"Today, our Democratic Majority will take up and pass the Assault Weapons Ban legislation: a crucial step in our ongoing fight against the deadly epidemic of gun violence in our nation," Pelosi said in a letter to members of her caucus.

Friday's vote comes as progressives, moderates and members of the Congressional Black Caucus are divided on how to handle the policing funding component of a broader public safety package, which will no longer be included in Friday's series of votes. While negotiations on this are continuing, according to sources, the key negotiators were hoping to settle both issues in hopes of having a vote on both packages as soon as Friday.

Moderate and vulnerable Democrats had been pushing for a vote on the policing legislation before they leave town in an effort to rebut GOP attacks over defunding the police, but members of the CBC had concerns and have been pushing for accountability language.

The deal to try to combine both pieces of legislation came together late Thursday night, and was negotiated between Pelosi, Congressional Black Caucus Chairwoman Joyce Beatty of Ohio, and moderate Democratic Rep. Josh Gottheimer of New Jersey. But other members of the Congressional Black and Progressive caucuses were frustrated that they were kept out of the loop, which is ultimately why Democratic leadership decided to separate the bills.

Members of the Congressional Black Caucus held a meeting Friday morning and sources say many were frustrated to not be given equal negotiating power.

"This was supposed to happen in several weeks to give time for us to negotiate stronger police accountability measures," a staffer of a CBC member told CNN. "Then they sprung this deal on us in the dead of night without any hearings, committee or time for members to read the text much less debate."

When asked about the disagreement by CNN, Beatty denied there was problems within her caucus.

"There is no disappointment with the Congressional Black Caucus," she said. "We have a big tent. And what I am most proud of, is that we were able to go today and take a leadership role. Look at where we were 48 hours ago."

She added: "There was no failure here."

The House is slated to depart Washington for a month-long recess starting Friday afternoon. Pelosi could call lawmakers back into town before September for specific circumstances, something she would likely do if Senate Democrats pass a separate bill on climate change and prescription drug pricing in the coming weeks.

House Democrats held a procedural vote open for more than an hour on Friday while Pelosi, Congressional Black Caucus members, Gottheimer and others huddled on the House floor to negotiate. Ultimately, the news broke during the vote that leadership was splitting the package.

The US previously had an assault-style weapons ban first implemented in 1994, which expired in 2004.

Earlier this year, Congress passed a bipartisan bill to address gun violence that amounted to the first major federal gun safety legislation in decades. The legislation included millions of dollars for mental health, school safety, crisis intervention programs and incentives for states to include juvenile records in the National Instant Criminal Background Check System. It also made significant changes to the process when someone ages 18 to 21 goes to buy a firearm and closes the so-called boyfriend loophole, a victory for Democrats, who have long fought for that.

In a hearing Wednesday before the House Oversight Committee, CEOs from two major gun manufacturers faced questions from lawmakers about their sales of AR-15-style weapons, which have been used in many of the nation's deadliest mass shootings.

"This is an ultra-deadly weapon, engineered to kill enemy soldiers on the battlefield," said the committee chairwoman, Democratic Rep. Carolyn Maloney of New York. "Yet the gun industry has flooded our neighborhoods, our schools, and even our churches and synagogues with these deadly weapons and has gotten rich doing it."

The committee also released the finding of their investigation, which alleges gun manufactures selling assault-style rifles have employed questionable marketing tactics, including appealing to White supremacists, "preying" on the masculinity of young men, and running advertisements that mimic video games.