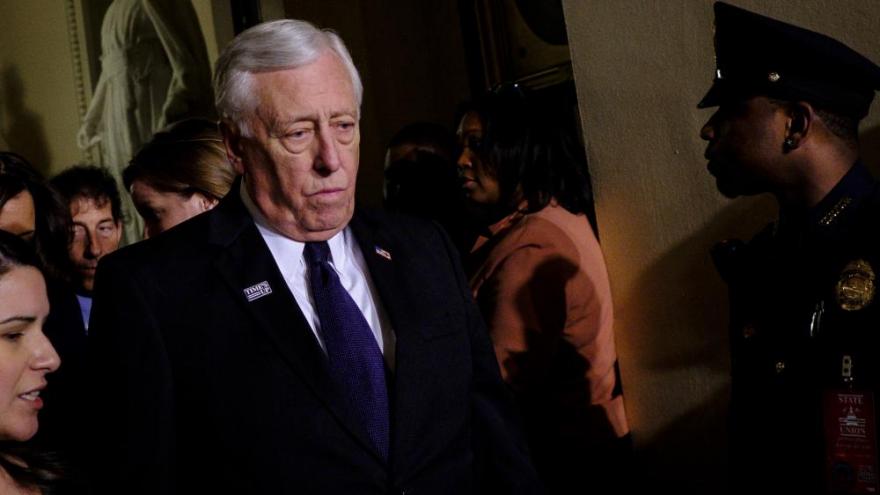 House Minority Whip Steny Hoyer leaves the House of Representatives Chamber after President Donald Trump's first State of the Union Address before a joint session of Congress on January 30, 2018 in Washington, DC.

(CNN) -- Members of the US House of Representatives will not return to Washington next week, House Majority Leader Steny Hoyer said Tuesday morning, a reversal from the plan Democratic leaders announced fewer than 24 hours earlier.

"We have decided we will not come back next week, but we will come back very soon to pass the CARES 2 piece of legislation, and at that time we will be asking members to return to the Congress, to Washington," Hoyer told reporters on a call.

He said the Capitol attending physician Brian Monahan "forcefully" emphasized that the numbers of novel coronavirus infections in DC are still going up and that some surrounding areas in Maryland are hotspots.

"The House physician's view was that there was a risk to members that was one he would not recommend taking," said Hoyer.

In light of Monahan's stance, as well as the fact that the next coronavirus relief package will not be "definitely ready to be considered next week," Democratic leaders chose not to call the House back next week.

Monahan provides medical advice and treatment to both members of the House and the Senate, and Monahan did not respond to multiple inquiries seeking comment about the Senate's plans.

The Senate is scheduled to return next week and the office of Senate Majority Leader Mitch McConnell would not say Tuesday if Monahan said it was safe for the chamber to return. When asked what the physician's office recommended, McConnell's spokesman instead referred CNN to a statement from Monday, which did not address the issue.

"We will modify routines in ways that are smart and safe, but we will honor our constitutional duty to the American people and conduct critical business in person," he said in the statement.

While the Senate has a smaller membership than the House, bringing the chamber back to session means support staff, custodial staff, cafeteria workers and Senate aides also will be back and working in the chamber.

McConnell was pressed by his Senate Republican colleagues on a conference call Tuesday about what the Senate agenda will include beyond confirming judges, according to a source on the call.

McConnell told members there will be "plenty" to do and planned to reveal more details soon, while adding he wanted to resume regular party lunches when the chamber reconvenes next week, the source said.

According to the source, GOP Sen. Jim Risch of Idaho suggested on the call he didn't want to come back to session -- and asked McConnell what was on the agenda.

"We have plenty to do," McConnell said, according to the source.

Hoyer's announcement came after a number of House Democrats expressed strong concerns over the plan to return to DC.

Members on a Democratic caucus call Monday cited safety issues about returning so soon, arguing it would send the wrong message as states remain under lockdown. On the call, Rep. Debbie Wasserman Schultz, a Florida Democrat, sharply criticized the move to bring the House back next week, calling it dangerous, according to two sources.

"This makes no sense," one House Democrat told CNN on Monday.

And others made the case directly to House Speaker Nancy Pelosi, her staff and others in the leadership that it would be the wrong decision to bring the House back now, according to one Democratic source.

Asked if he is worried about the optics of the House remaining in recess while the Senate and White House officials will be in town working, Hoyer pushed back on the notion.

"As I understand it, the Senate's coming back so they can confirm judges and confirm executive appointments," he said. "Now whether they're going to do any substantive legislation is another question."

Hoyer also hit President Donald Trump's nightly press conferences, saying they could be considered working, "but one could argue that point."

"I think the White House leadership has been negative in my opinion, not positive in terms of bringing the country together and giving them solid information on which they can rely," Hoyer said.

He added that most House members "are working harder than they would work if they were at the Capitol."

"They have been working daily to help their communities deal with the coronavirus crisis," he said.

Following Hoyer's announcement, House Republican Whip Steve Scalise of Louisiana accused Democrats of wanting to "draft bills in secret" rather "than lead our country's reopening by showing that we can safely get back to work in Congress."

"If President Trump and Senate Republicans can be in Washington working safely, there's no reason for House Democrats to prevent us from doing the same," Scalise said in a statement.