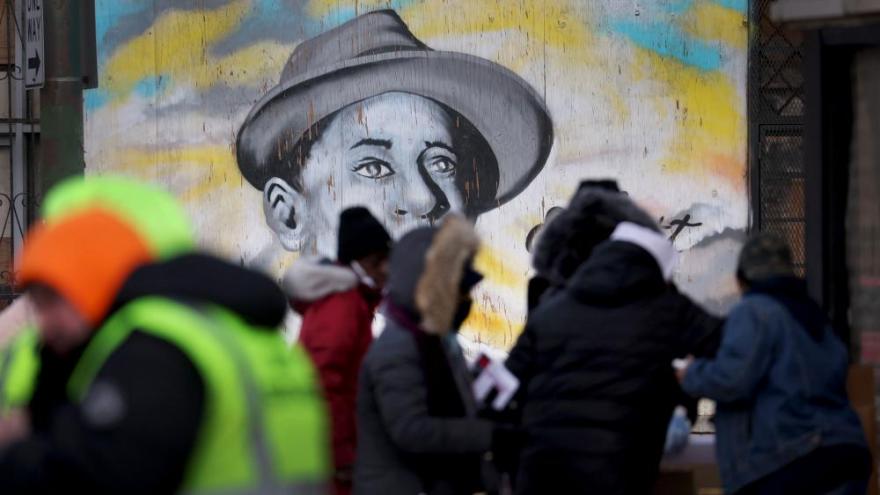 Lawmakers passed the Emmett Till Anti-lynching Act on Monday in a 422-3 majority. Pictured is an Emmett Till mural in Chicago.

(CNN) -- The House's overwhelming support of legislation that would make lynching a federal hate crime directly addresses the history of racism and bigotry in the US, the bill's sponsor said.

Lawmakers passed the Emmett Till Anti-lynching Act on Monday in a 422-3 majority. A similar bill was first introduced by Democratic Rep. Bobby Rush of Illinois two years ago but was then blocked by the Senate in February 2020 following the murder of Ahmaud Arbery.

Anti-lynching legislation is not a new proposal on the House floor. Rush said there have been more than 200 attempts to pass federal anti-lynching law.

Rush said in a statement that the anti-lynching legislation will prosecute lynching "when a conspiracy to commit a hate crime results in death or serious bodily injury." A perpetrator can receive a maximum of 30 years in prison under this act in addition to any other federal crimes the perpetrator might commit.

"Today is a day of enormous consequence for our nation," Rush said. "By passing my Emmett Till Anti-lynching Act, the House has sent a resounding message that our nation is finally reckoning with one of the darkest and most horrific periods of our history, and that we are morally and legally committed to changing course."

Only three Republican representatives voted against the bill: Andrew Clyde of Georgia, Thomas Massie of Kentucky and Chip Roy of Texas.

Clyde told CNN there is no need for a "duplicative federal law."

"Lynching is an evil act of violence that is already against the law at the federal level; it is first-degree murder," he said.

"My home state of Georgia recently signed hate crime legislation into law this past year. H.R. 55 would create no new federal offense and the current hate crime criminal code already establishes penalties for willful bodily injury to another person.

Carving out a separate distinction for lynching may be symbolic, but it falsely suggests that individuals who commit, or attempt to commit, a lynching do not already face criminal charges and consequences. No matter the method or tool used in a horrendous act of violence, all victims of crime deserve equal justice."

CNN reached out to Massie for comment Tuesday morning, but his office directed media to his explanation on Twitter.

He tweeted on Monday, "This bill expands current federal 'hate crime' laws. A crime is a crime, and all victims deserve equal justice. Adding enhanced penalties for 'hate' tends to endanger other liberties such as freedom of speech."

Roy also released a statement saying, "It simply raises the punishment for things that are already federal crimes, including those that are unrelated to lynching — such as gender identity — in an effort to advance a woke agenda under the guise of correcting racial injustice."

The bill will now move to the Senate, where it will need to be passed before going to President Joe Biden's desk for his signature.

The bill is named after Emmett Till, a Black boy from Mississippi who was brutally murdered by a group of White men for allegedly whistling at a White woman in 1955. Till's mother Mamie Till Mobley held an open-casket funeral despite the unrecognizable look of her son's body. An image of Till's body was featured in Jet magazine, a photo which Rush remembers vividly.

"That photograph shaped my consciousness as a Black man in America, changed the course of my life, and changed our nation," Rush said.

Ollie Gordon, Till's cousin, said in a statement: "I encourage the Senate to pass the bill and for President Biden to promptly sign it into law, so that those who have lost loved ones to lynchings and other hate crimes know that bigoted violence will not be tolerated."