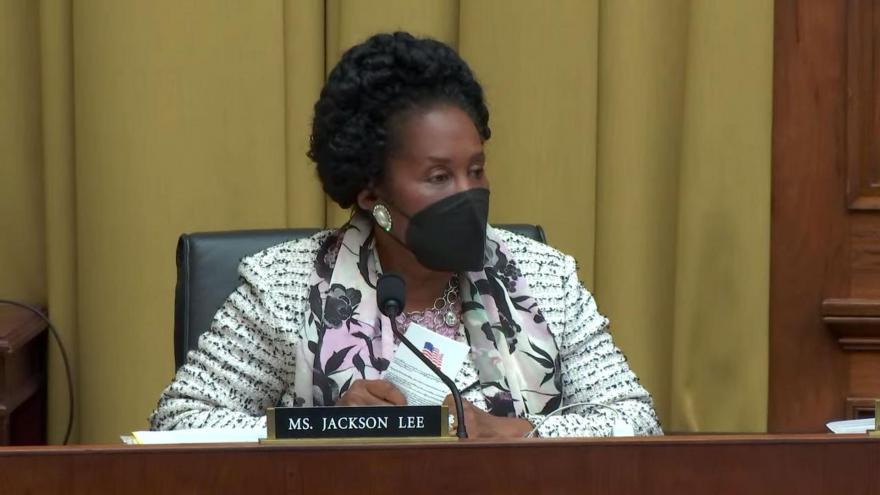 A House committee on April 15 advanced a bill that would create a commission to study reparations for descendants of enslaved Americans, a major achievement for advocates of reparations as it marks the first time this bill would have a full House vote on the floor.

(CNN) -- A House committee on Wednesday advanced a bill that would create a commission to study reparations for descendants of enslaved Americans, a major achievement for advocates of reparations as it marks the first time this bill could have a full House vote on the floor.

The House Judiciary Committee late Wednesday night approved H.R. 40 by a vote of 25-17.

The measure proposes the creation of a federal commission to study reparations and recommend remedies for the harm caused by slavery and the discriminatory policies that followed abolition. The commission would also consider how the US would formally apologize for "perpetration of gross human rights violations and crimes against humanity on African slaves and their descendants."

This legislation, however, has a very little chance of becoming law. Even if the bill is scheduled for a floor vote, it faces opposition from some Democrats and most Republicans and it's unlikely it will receive the 60 votes needed to break a filibuster in the Senate.

A Democratic aide told CNN that while this is the last step before a bill goes to the floor for a vote, there are a lot of reasons why this legislation may never have a full House vote. There are a number of steps in that process — and time constraints, vote considerations, as well as the news of the day can all be factors in why a bill doesn't get to the floor for a vote.

But many are still pushing for this legislation to pass, including House Judiciary Committee chairman Jerry Nadler, a Democrat from New York.

"This moment of national reckoning comes at a time when our nation must find constructive ways to confront a rising tide of racial and ethnic division," he said in his opening remarks of the committee hearing. "White nationalism and police-community conflict are just part of the long legacy of anti-Black racism that has shaped our nation's laws, institutions, and societal attitudes."

And Democratic Rep. Sheila Jackson Lee from Texas, who sponsored the bill, said in a statement before the vote in the Judiciary committee that the legislation was "long overdue."

"We're asking for people to understand the pain, the violence, the brutality, the chattel-ness of what we went through," she said during the committee hearing Wednesday.

The deaths of Black Americans at the hands of police, including George Floyd, Breonna Taylor and most recently Daunte Wright, have drawn increased attention for Congress to do something about racial injustice and how they can address America's longtime racism of African-Americans in the country.

Republican Rep. Burgess Owens, who is the descendent of slaves, said during the committee markup that "slavery was and is still evil" but that "reparation is divisive" and demeaning to Black Americans.

"It speaks to the fact that we are a hapless, hopeless race that never did anything but wait for White people to show up and help us," the Utah Republican argued. "And it's a falsehood. It's demeaning to my parents' generation."

Ahead of the committee vote Wednesday, House Majority Leader Steny Hoyer, who sets the floor schedule, did not say when the bill would receive a full House floor vote.

"We'll see what the committee does and at that point in time, I'll start to think about, what, what we'll do" Hoyer said.

Hoyer said he hopes that President Joe Biden will establish a presidential commission to study reparations.

"I am also hopeful, that the President, who has mentioned this as an issue he cares a great deal about, I would hope that the President himself would move ahead with the convening of a commission, Presidential Commission, that would look at this issue, and come up with suggestions as to what actions are appropriate."

H.R. 40, which was first introduced in Congress in 1989 by Michigan Democrat John Conyers, is named for Gen. William Sherman's Field Order No. 15 -- a promise of 40 acres and a mule to former slaves at the end of the Civil War.

Jackson Lee said Tuesday that the Congressional Black Caucus discussed reparations with Biden during their meeting that day, and that Biden is "committed to the concept" of reparations.