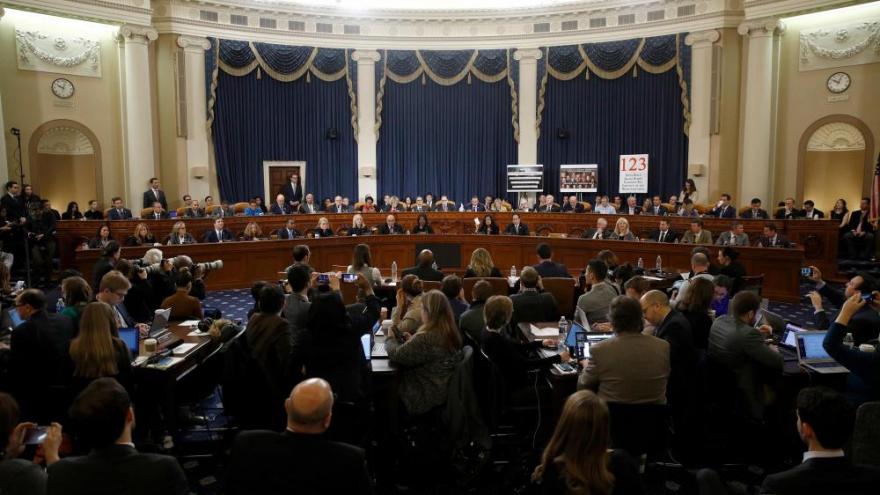 The House Judiciary Committee released its impeachment report to accompany the articles of impeachment against President Donald Trump that will be on the House floor this week.

(CNN) -- The House Judiciary Committee early Monday morning released its impeachment report to accompany the articles of impeachment against President Donald Trump that will be on the House floor this week.

The 658-page report explains the decision to charge Trump with two articles of impeachment, abuse of power and obstruction of Congress. It also includes the committee reports previously issued from the House Intelligence Committee laying out the evidence against the President and the Judiciary Committee explaining the constitutional grounds for impeachment, as well as Republican views that contest the inquiry and argue the President did not commit impeachable offenses.

House Judiciary Chairman Jerry Nadler's panel wrote that Trump "ignored and injured our national security when he corruptly abused the powers of his office for personal political gain."

"Taken together, the articles charge that President Trump has placed his personal, political interests above our national security, our free and fair elections and our systems of checks and balances. He has engaged in a pattern of misconduct that will continue if left unchecked," the judiciary panel's report said. "Accordingly, President Trump should be impeached and removed from office."

The report is one of the steps that's needed as the House prepared to consider the two articles of impeachment on the floor, which are expected to get a vote on Wednesday. The House Rules Committee will take up the articles to set the rules for the floor debate in a Tuesday hearing.

Democrats use the report to walk through the articles against the President and explain the decision to charge him with abuse of power, stating that "the risk posed by President Trump's pattern of misconduct, is the very definition of an impeachable offense."

The report also argues that Trump committed crimes, even if they were not explicitly referenced in the impeachment articles, including bribery and wire fraud.

"While there is no need for a crime to be proven in order for impeachment to be warranted, here, President Trump's scheme or course of conduct also encompassed other offenses, both constitutional and criminal in character, and it is appropriate for the Committee to recognize such offenses in assessing the question of impeachment," the report says. "President Trump's abuse of power encompassed both the constitutional offense of 'Bribery' and multiple federal crimes. He has betrayed the national interest, the people of this Nation, and should not be permitted to be above the law. It is therefore all the more vital that he be removed from office."

Democrats also explain in the report the House's investigation leading to impeachment, noting that "for the first time in modern history, committees of the House acted as original factfinders in a presidential impeachment." The report details the process undertaken by the House Intelligence and Judiciary Committees, arguing it was a fair process that gave the President ample opportunities to participate, even if he did not do so.

Republicans, in dissenting views, accused Democrats of running an unfair process that did not establish the President committed any impeachable offenses.

"Before the House of Representatives are two Articles of Impeachment against the President of the United States, Donald John Trump. To these Articles, the minority dissents," wrote Rep. Doug Collins of Georgia, the top Republican on the Judiciary Committee. "The majority's actions are unprecedented, unjustifiable and will only dilute the significance of the dire recourse that is impeachment. The ramifications for future presidents are not difficult to surmise."

The dissenting views also includes the report released by House Intelligence Committee Republicans that was issued along with the Democratic report when the public hearings in the intelligence panel concluded.

CORRECTION: This story has been corrected to accurately reflect the obstruction of Congress charge laid out in the articles of impeachment against President Donald Trump.