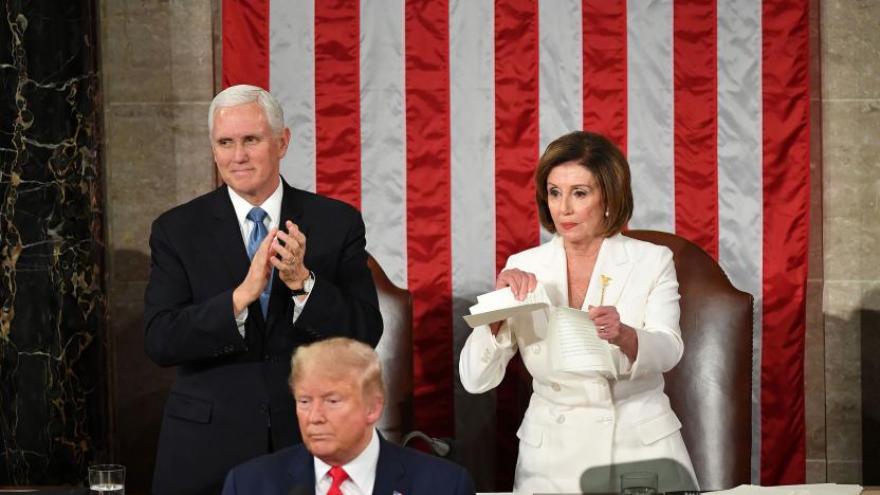 The party-line vote of 224-193 wasn't on the resolution itself, but instead was a procedural move to set it aside and end debate on the measure. Independent Rep. Justin Amash voted with Democrats to table the resolution.

Republicans introduced the resolution after Pelosi, in a dramatic move captured on camera, tore her copy of the President's speech at the end of his annual address to Congress on Tuesday night. Earlier in the night, the President appeared to snub the House speaker by ignoring her attempt at a handshake.

Sponsored by Texas Rep. Kay Granger, the resolution called Pelosi's conduct at the State of the Union "a breach of decorum" that "degraded the proceedings of the joint session."

"Speaker Pelosi's actions last night were appalling and shameful. Regardless of her personal feelings, she had a responsibility to conduct herself with civility as the presiding officer representing the House of Representatives. She is not the Speaker of the Democrats, but of the People's House," Granger said Wednesday.

Pelosi's spokesman, Drew Hammill, responded in a statement: "It is sad to see a senior Member, respected on both sides of the aisle, have to kneel at the altar of Trump in order to win her primary," he said. "That's all this is about." Granger is the top Republican on the House appropriations committee.

The speaker has faced criticism from a wide array of Republican lawmakers for the move. On Wednesday, Rep. Matt Gaetz, a Florida Republican who is a staunch Trump supporter, announced on Twitter that he was filing an ethics complaint against Pelosi. He attached a letter addressed to Rep. Ted Deutch, the chairman of the House Ethics Committee, and Rep. Kenny Marchant of Texas, the committee's top Republican.

"I'm filing an ethics complaint against @SpeakerPelosi for destroying @realDonaldTrump's State of the Union speech," Gaetz wrote. "Her conduct was beneath the dignity of the House, and a potential violation of law (18 USC 2071)," a measure concerning the destruction of government records.

Legal experts surveyed by Politifact say Pelosi's shredding of the speech did not violate any records-keeping law.

Hammill panned Gaetz's effort as "a frivolous stunt from a Congressman desperate to get back in the President's good graces after he voted with Democrats and against the President on Iran."

"I tore up a manifesto of mistruths," she said. "It was necessary to get the attention of the American people to say, 'This is not true. And this is how it affects you.' And I don't need any lessons from anyone, especially the President of the United States, about dignity."

Other Democratic leaders have defended the move; "As far as I'm concerned, a shredder wasn't available, and so she did what she needed to do," said House Democratic Caucus Chairman Hakeem Jeffries.

The frosty exchanges between Pelosi and Trump Tuesday night marked unmistakable signs of the deteriorating relationship between the two leaders, who haven't spoken in months.

Pelosi confirmed to CNN before Trump's speech Tuesday that she hadn't spoken to the President since a meeting on Syria policy in October.

House Majority Leader Steny Hoyer told reporters Wednesday that the tension on display at the State of the Union reveals an animosity that Democrats haven't felt with prior Republican presidents — which he blamed on Trump.

But he still expressed hope for House Democrats and the White House to work together on issues like infrastructure and prescription drug pricing between now and Election Day.

"This is not about personal feelings. It's about the American people," Hoyer told reporters at his weekly pen and pad briefing.

This story has been updated to include additional developments Thursday.