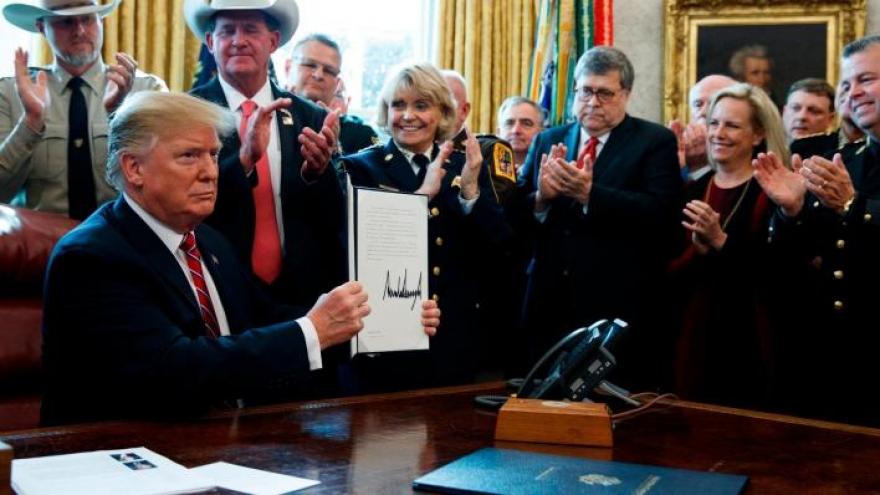 he House will vote whether to override the President's first veto in a largely symbolic effort that reflects the new era of divided government under President Donald Trump.

The vote was 248-181, with 14 Republicans voting with Democrats to support the override. It was a steep hill to climb for opponents of Trump's national emergency as the House would have needed two-thirds of its members to back the veto override. Thirteen Republicans voted for the resolution in the first place.

"Today, Congressional Democrats attempted to block the President's National Emergency Declaration -- they failed," White House spokesman Hogan Gidley said in a statement after the vote. "Democrats continue to ignore the reality that our porous southern border is a magnet for illegal immigration, child smugglers, human traffickers, drug cartels, gangs and many other criminals. This national security and humanitarian crisis endangers every American and cannot be described as anything other than a National Emergency."

Both chambers of Congress had passed a resolution to overturn Trump's national emergency declaration to fund more border wall, which would use billions from the Treasury and Defense departments after Congress rejected giving Trump the full amount of border wall money he requested for the year.

The decision sparked criticism from Republicans and Democrats alike, many of whom argued the national emergency action would violate the Constitution.

The House easily passed the resolution of disapproval in February. A few weeks later, 12 Senate Republicans joined with Senate Democrats to pass it, marking a sharp rebuke from members of the President's own party on a key issue to his base.

The President vetoed the bill one day after it cleared the Senate.

"Congress has the freedom to pass this resolution and I have the duty to veto it," Trump said from the Oval Office before officially sending the measure back to Congress without his approval.

House Democrats, meanwhile, were quick to announce they would hold an override vote on March 26. "The House and Senate resoundingly rejected the President's lawless power grab, yet the President has chosen to continue to defy the Constitution, the Congress and the will of the American people," Pelosi said in a statement at the time.

But the House faced a high hurdle, needing a two-thirds majority -- rather than a simple majority -- to override the veto. The House first passed the bill 245-182.

House Democratic leaders were under no illusion that the veto override would pass. Speaker Nancy Pelosi said last week that the point of the vote is to make it clear the new Democratic-controlled House won't tolerate the President's persistence for a border wall.

"Whether we can succeed with the number of votes is not the point," Pelosi said at an event in New York. "We are establishing the intent of Congress."

Senate Minority Leader Chuck Schumer said earlier this month that the National Emergency Act allows for a resolution of disapproval to come up every six months, and Democrats intend to bring it up again then.