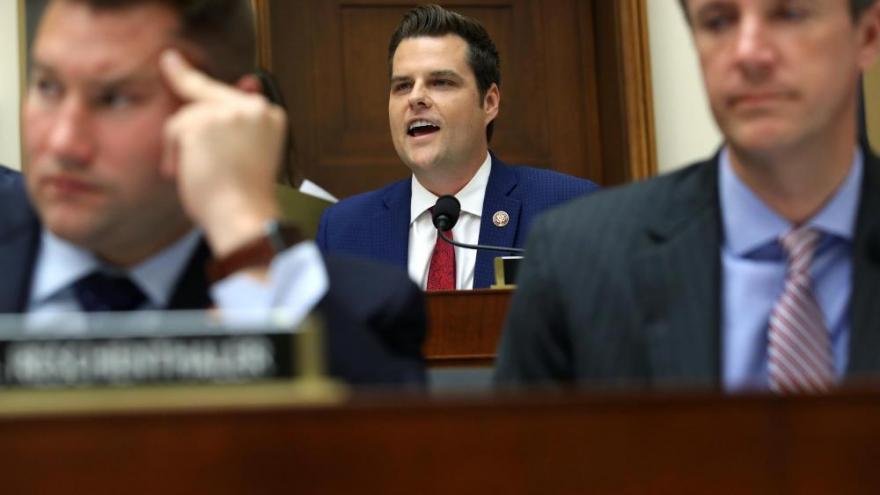 The House Ethics Committee said Friday it was opening an investigation into the allegations surrounding embattled Rep. Matt Gaetz. Gaetz is shown in the Rayburn House Office Building July 24, 2019 in Washington, DC.

(CNN) -- The House Ethics Committee said Friday it was opening an investigation into the allegations surrounding embattled Rep. Matt Gaetz, the Florida Republican facing a federal investigation into whether he violated sex trafficking laws.

The top Democrat and Republican on the Ethics Committee said they were examining Gaetz for a host of potential offenses, including both potential illegal activity and violations of House rules.

"The Committee is aware of public allegations that Representative Matt Gaetz may have engaged in sexual misconduct and/or illicit drug use, shared inappropriate images or videos on the House floor, misused state identification records, converted campaign funds to personal use, and/or accepted a bribe, improper gratuity, or impermissible gift, in violation of House Rules, laws, or other standards of conduct," Ethics Chairman Ted Deutch of Florida and ranking Republican member Jackie Walorski of Indiana said in a joint statement Friday.

The House Ethics panel also said it was opening an investigation into whether New York GOP Rep. Tom Reed engaged in sexual misconduct.

Federal investigators are examining allegations that Gaetz had sex with an underage girl who was 17 at the time and with other women who were provided drugs and money in violation of sex trafficking and prostitution laws. Joel Greenberg, an associate of Gaetz, is likely to strike a plea deal with federal prosecutors over the charges he faces, his attorney and prosecutors said in court Thursday, which potentially puts additional legal pressure on the congressman.

"The smears against me range from distortions of my personal life to wild, and I mean wild, conspiracy theories," the Florida Republican said at the Women for America First Summit at Trump National Doral.

In a statement earlier Friday, Gaetz's office said, "Once again, the office will reiterate, these allegations are blatantly false and have not been validated by a single human being willing to put their name behind them."

The House Ethics Committee is also examining a CNN report last week that Gaetz shared images of nude women with his colleagues, including while on the House floor. Two sources told CNN that Gaetz showed them the images.

The House Ethics Committee often puts its own investigations on hold or de-conflicts with the Justice Department while a federal investigation is ongoing.

One Republican, Rep. Adam Kinzinger of Illinois, called for Gaetz to step down on Thursday. House Republican leader Kevin McCarthy of California said last week that the allegations against Gaetz were serious, but he also noted that Gaetz had denied them. A senior House GOP source said Gaetz was unlikely to be removed from his committees unless there's an indictment.

The Ethic Committee investigation into Reed stems from a former lobbyist last month accusing Reed in a Washington Post report of sexual misconduct at a Minnesota pub in 2017. After the allegation became public, Reed apologized and said he took "full responsibility," announcing he would not be seeking office in 2022.

This story has been updated with Gaetz's remarks Friday night.