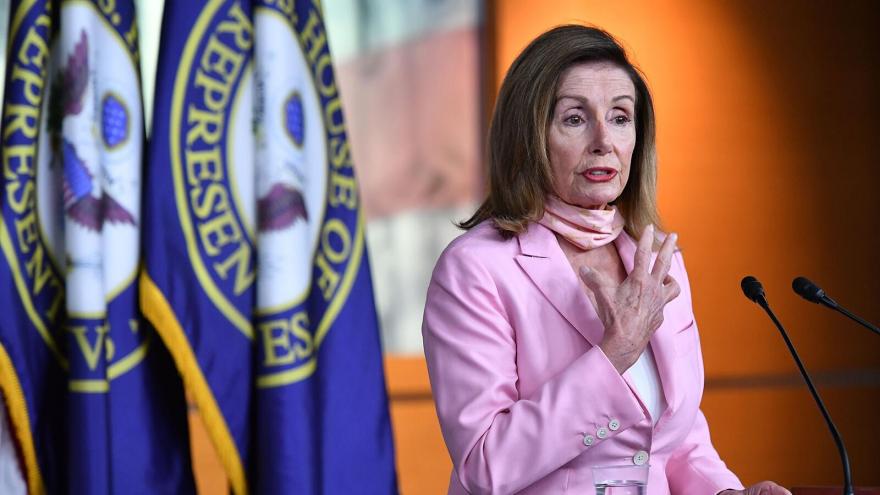 House Speaker Nancy Pelosi at the US Capitol in Washington, DC on July 31, 2020. House Democrats will vote on giving the Postal Service a $25 billion boost.

(CNN) -- The House is set to return on Saturday to vote on legislation related to the US Postal Service, House Democratic leaders announced Monday, with an eye toward providing the financially strapped agency with $25 billion in funding despite White House objections.

The bill is still being finalized, top Democrats told members during a caucus call, but it will incorporate a version of Rep. Carolyn Maloney's Delivering for America Act, which would prohibit recent USPS operational changes the Trump administration has made that have slowed mail service around the country.

The bill will also include Democrats' initial ask for $25 billion in funding for the Postal Service, three sources familiar with the matter told CNN.

House Speaker Nancy Pelosi told members the final bill is likely to come out of committee on Tuesday.

Democrats on the House Oversight Committee also announced Monday afternoon that Postmaster General Louis DeJoy will testify next week amid accusations that the Trump administration is purposefully hamstringing the Postal Service in an effort to prevent mail-in voting during the pandemic.

Pelosi announced over the weekend that she would call the chamber back into session from its August recess to consider emergency legislation to halt service changes carried out under DeJoy. The House had previously planned to next return for votes in the middle of September.

Democrats have charged that the new policies are intended to impede mail-in balloting ahead of the November election. DeJoy, an ally and donor of President Donald Trump, has denied the claims, saying the changes are intended to save money amid a dire financial situation at the USPS.

"The Postal Service is a pillar of our democracy, enshrined in the Constitution and essential for providing critical services: delivering prescriptions, Social Security benefits, paychecks, tax returns and absentee ballots to millions of Americans, including in our most remote communities," Pelosi wrote in a letter to members. "Alarmingly, across the nation, we see the devastating effects of the President's campaign to sabotage the election by manipulating the Postal Service to disenfranchise voters."

Although the USPS has repeatedly tried to reassure voters it can handle the influx of mail-in ballots, in newly released letters, the USPS sent warnings to nearly every state that slowdowns in delivery could cause ballots to show up late and not be counted.

Initially, Democrats sought to include funding for the USPS in a larger coronavirus stimulus package, but negotiations between congressional Democrats and the White House for such a bill have broken down. Trump has explicitly linked his resistance to including the additional $25 billion -- an amount requested by the Postal Service Board of Governors -- to preventing the USPS from handling an upsurge in mail-in ballots.

During since-stalled negotiations with Democrats over the broader coronavirus relief package, the White House did reach a tentative agreement on $10 billion for the Postal Service, people involved with the talks say. But administration officials are opposed to a USPS-specific bill like the one Democrats are set to propose -- and have said any operational changes made by the postmaster general have been done with only the postal service's finances in mind.

White House chief of staff Mark Meadows on Monday called for the USPS funding to be wrapped into a measure alongside other pieces of the relief talks where the two sides agree, including provisions like another round of direct payments to Americans.

Meadows said it is unlikely Democrats will agree to that approach, arguing they will use the USPS bill "as a political tool instead of a legislative tool."

"The President is very clear he's willing to provide money for the post office as long as it is included in some other skinny measure if we can't agree to a larger deal," Meadows told reporters.