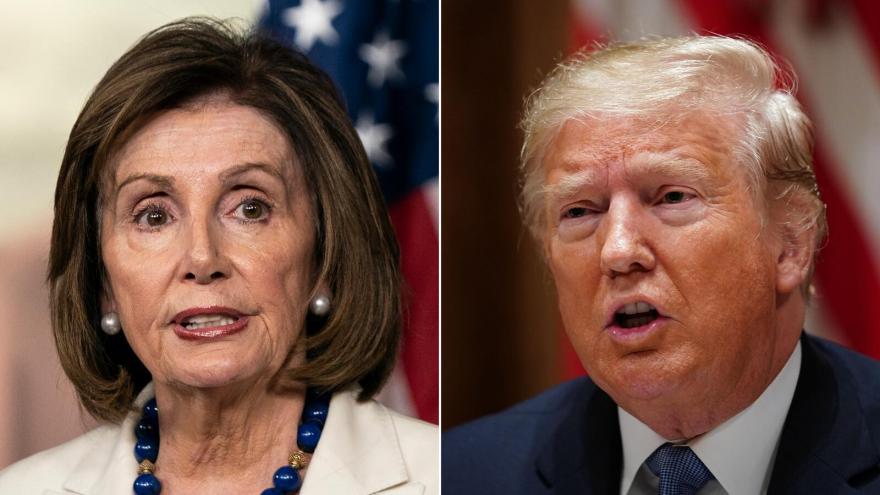 Speaker Nancy Pelosi and her team are considering a lightning-quick impeachment process if Mike Pence and the Cabinet refuse to take steps to remove President Trump from office in less than two weeks' time, according to multiple Democratic sources.

(CNN) -- Speaker Nancy Pelosi and her leadership team are considering a lightning-quick impeachment process if Vice President Mike Pence and the Cabinet refuse to take unprecedented steps to remove President Donald Trump from office in less than two weeks' time, according to multiple Democratic sources.

The stunning intervention to remove a sitting president would need significant bipartisan support to succeed in the Senate, something Democrats don't have yet. But Pelosi has bluntly warned the White House that the House would impeach Trump for "seditious acts" in inciting riots at the Capitol on Wednesday.

"This is urgent -- this is an emergency of the highest magnitude," the California Democrat told reporters Thursday. "My phone has been exploding with 'impeach, impeach, impeach.' "

Pelosi and her leadership team spoke Thursday night about whether to hold a quick impeachment vote, and the overwhelming sentiment was to move ahead, according to multiple sources. While there were some dissenters concerned that the move could be perceived as an overreach and turn off Trump supporters in their districts, the view among most top Democrats -- including Pelosi -- is that Trump should be held accountable for his actions.

The full Democratic caucus will speak Friday at 12 p.m. ET.

Moving ahead with impeachment, of course, doesn't mean Congress would be able to remove Trump from office. Senate Majority Leader Mitch McConnell could let the clock run out and not hold an impeachment trial in his chamber given that President-elect Joe Biden will be President on January 20.

For his part, Biden has no appetite for opening an impeachment proceeding, people familiar with the matter said Thursday night, as he prefers to keep his focus on taking office in less than two weeks. "Impeachment would not help unify this country," a person close to Biden said, who added that "this is a matter to be decided by the Congress." Sources told CNN earlier Thursday the President-elect had no intention of weighing in on the 25th Amendment talks either.

If Pence and the Cabinet don't invoke the 25th Amendment, Democrats have been discussing a process that would allow them to bypass the committee proceedings and move articles of impeachment directly to the floor within two days.

The discussions are expected to intensify Friday, when House Democrats hold their first full-caucus call since the attack on the US Capitol as a growing number of members press for impeachment.

This call, scheduled for noon ET, will be an important moment in terms of what's going to transpire over the next two weeks. While House Democrat after House Democrat has backed a second impeachment, the caucus itself hasn't gathered since the dramatic events transpired. The call will be the first opportunity for lawmakers to talk to leadership about the impeachment issue, the 25th Amendment issue and significant security concerns related to the Capitol.

Indeed, given the tight timeline, it isn't possible to launch a formal impeachment inquiry like in 2019, an arduous undertaking that took several months.

But one option Democrats are exploring: offering articles of impeachment through a privileged resolution. That would allow the chamber to move ahead with a vote to impeach Trump within two days, skip hearings, approving an organizing resolution, an investigation and moving straight to a vote.

Top Democrats in both chambers seem to embrace this approach.

The first step is to draft the resolution, something that multiple Democratic members are now circulating.

The one with the most traction is being drafted by Reps. David Cicilline of Rhode Island, Jamie Raskin of Maryland and Ted Lieu of California -- three members of the House Judiciary Committee. Others have proposed options as well, including Minnesota Rep. Ilhan Omar.

Rep. Hakeem Jeffries of New York, a member of the House Judiciary Committee and part of his party's leadership, reiterated to CNN that the preferred route is for the Trump administration to invoke the 25th Amendment.

"The sooner the better," Jeffries said of forcing Trump out of office. "It's a weighty constitutional matter to go down the road of impeachment, ultimately some form of a trial, conviction or removal."

Any member could offer a privileged resolution, but it has to be when the House is in session. It cannot be a brief pro forma session when no legislative business is conducted. Right now, the House is not scheduled to be back until January 19, but House Majority Leader Steny Hoyer, a Maryland Democrat, has not ruled out bringing the House back into session next week.

Once the resolution is offered, it would automatically be put up for a vote within 48 hours. With majority support, the House would impeach Trump, sending it to the Senate for a trial about whether to remove him from office.

But with so little time left in Trump's presidency, Senate Majority Leader Mitch McConnell would essentially be able to run out the clock and avoid a Senate impeachment trial in Trump's remaining few days in office, according to Hill sources.

McConnell declined to comment on the Kentucky Republican's views on invoking the 25th Amendment.

Impeachment wasn't the preferred route going into the day, nor was it considered a likely option for Democratic leaders. But the momentum of members getting behind it creates momentum for something leaders weren't initially planning to pursue.

Given the tight timeline and volatile dynamics, at this point nothing is a sure thing and there's a sense that the dust needs to settle a bit before an actual course of action is laid out.

It's possible for Congress could take steps to make sure that if Trump were impeached, the Senate could make it so he could never be elected to office again. But that still would require the support of two-thirds of the Senate to make that happen.

This story has been updated with additional reporting and developments.