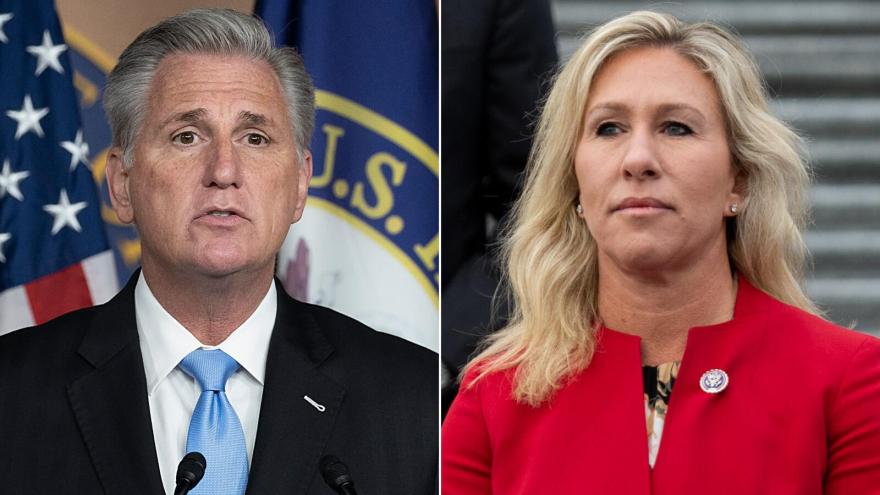 Greene (right) described Ocasio-Cortez as the "little communist from New York City." Democrats believe it is time for McCarthy to do more.

(CNN) -- Nearly 40 House Democrats are demanding House Minority Leader Kevin McCarthy take what they call "immediate action" to address the behavior of GOP Rep. Marjorie Taylor Greene of Georgia, whose actions, they say in a Thursday letter obtained by CNN, "could lead to violence against members of Congress."

The group chose to take this step after Greene spoke as a warmup act for former President Donald Trump at his rally in Ohio last weekend, an aide familiar with the letter's origins told CNN. Greene, without evidence, repeatedly claimed Trump won the 2020 election and viciously attacked Democratic Rep. Alexandria Ocasio-Cortez of New York.

Greene described Ocasio-Cortez as the "little communist from New York City," and nodded in agreement with the crowd when they started shouting "lock her up."

Ocasio-Cortez has signed on to the letter, which is led by Rep. Pramila Jayapal of Washington and is signed by a diverse list of House Democrats, including fellow progressives like Reps. Cori Bush of Missouri and Ilhan Omar of Minnesota and more moderate members like Reps. Gerald Connolly of Virginia and Brendan Boyle of Pennsylvania.

The Democrats write that they believe Greene's conduct has reached an "unacceptable level," referring to several incidents from her short tenure in Congress, including Greene's posting of an anti-transgender sign outside of her office, directly across the hall from another lawmaker who has a transgender child.

"Rep. Greene's conduct does not comport with what we expect from a member of the House of Representatives," the letter reads. "Moreover, we are extremely concerned that her conduct is creating an unsafe work environment for members, and that her actions could lead to violence against members of Congress."

The group appealed to McCarthy by quoting from a statement the GOP leader issued in the beginning of February, where he distanced himself from past controversial statements made by Greene that had to come to light after she had been sworn into Congress. In that statement, McCarthy claimed that he had informed Greene that as a member of Congress she had a responsibility to hold herself to a higher standard and that her behavior going forward would change.

"Her past comments now have much greater meaning," McCarthy wrote. "Marjorie recognized this in our conversation. I hold her to her word, as well as her actions going forward."

Despite McCarthy's words for Greene at the time, he has refused to take any specific action to rein in her conduct. He whipped GOP votes in an unsuccessful attempt to prevent Democrats from removing Greene from her committees. And while he issued a stern rebuke after she compared mask requirements on the House floor to the Holocaust, he took no disciplinary action against her.

Greene defended her comments in a statement to CNN after the letter was released, saying the Democratic letter was "absurd."

"I receive constant harassment in public caused by the Democrat lies promoted by the media. Democrats singled me out and kicked me off committees for doing nothing wrong, and the death threats haven't stopped since," she added.

Before running for Congress, Green indicated her support for executing prominent Democrats in 2018 and 2019. She was also seen harassing Ocasio-Cortez's office during a 2019 Capitol Hill visit in since-deleted video that was saved by CNN's KFile.

Democrats believe it is time for McCarthy to do more, but they did not provide any specific course of action in the letter.

"We respectfully request that you work with her to address these issues with her and ensure that this type of behavior no longer continues."

In reality, McCarthy doesn't have many options. Greene already lost her committee posts, which is the most common form of discipline in the House. He could support a censure resolution or isolate her from the GOP conference by preventing her from attending conference meetings. Both moves are unlikely given Greene's popularity with GOP base voters. And as evidenced by her appearance at Trump's rally -- which he held for a primary challenger to one of the 10 House Republicans who voted to impeach him -- Greene has strong support from the former President. McCarthy has repeatedly shown an unwillingness to cross the base of the party or Trump.