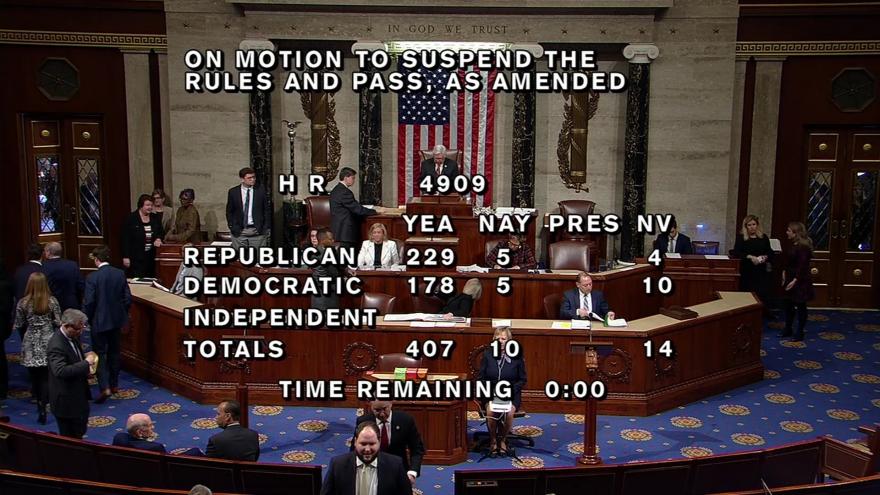 President Donald Trump is praising the House for passing a bill to provide funding to schools and law enforcement to prevent school shootings.

Trump says in a Wednesday tweet that the nation "must put the safety of America's children FIRST" by providing law enforcement and teachers with additional resources and training. The bill authorizes $500 million in Department of Justice grants for violence-prevention programs, a month after a deadly school shooting in Parkland, Florida, that killed 17 people.

Trump adds, "A tragedy like Parkland can't happen ever again!"

Earlier this week, the White House released an outline of the steps it is looking for Congress to take after the shooting, including strengthening the federal background check system — but Trump is deprioritizing his previous calls for additional gun control legislation.

The White House is welcoming House approval of school safety legislation that is the first gun-related action by Congress since the Florida school shooting a month ago.

The bill authorizes $500 million over 10 years for grants to improve training and coordination between schools and local law enforcement. It would also help identify signs of potential violence before they occur.

The House has approved a bill to improve school safety in the wake of the shooting that left 17 dead at a Florida high school. The bill authorizes $500 million over 10 years for grants to improve training and coordination between schools and local law enforcement and help identify signs of potential violence before they occur.

The vote marks the first gun-related action by Congress since the Feb. 14 attack at Marjory Stoneman Douglas High School in Parkland, Florida.

Hundreds of students from the Washington area are rallying at the Capitol to urge stricter gun control laws. The rally is part of a nationwide school walkout to protest gun violence following the massacre of 17 people at a Florida high school.

Fifteen-year-old Chloe Appel of Gaithersburg, Maryland, held a sign that said, "Fix this before I text my mom from under a desk." She's hopeful that Congress will enact gun control laws. She said that, "After today and after the next protest Congress will see how many people feel strongly about this so they will have to make a change."

House Democratic Leader Nancy Pelosi and other lawmakers addressed the crowd. The biggest applause by far was for Vermont Sen. Bernie Sanders. Students chanted his name and nearly drowned out his speech.

The House is set to vote on the measure Wednesday. If approved, the bill would be the first gun-related action by Congress since the Feb. 14 attack at a Florida high school that left 17 dead.

The White House said in a statement Wednesday that Trump's top priority is to keep the American people safe from those who wish to do them harm or to inflict terror upon them. The statement calls the bill a good step.

The deputy director of the FBI says the agency could have and should have done more to investigate information it received prior to last month's massacre at Florida's Marjory Stoneman Douglas High School.

Testifying before the Senate Judiciary Committee, David Bowdich said authorities will never know if any investigative work would have prevented the shooting, "but we clearly should have done more."

The FBI has acknowledged it receive separate tips related to the accused shooter, Nikolas Cruz.

Bowdich says the tips occurred on September 25, 2017 and on Jan. 5. He says he doesn't know why the "very explicit" tip from Jan. 5 was not forwarded to local law enforcement.

Bowdich says the FBI "will not hide" from its mistakes.