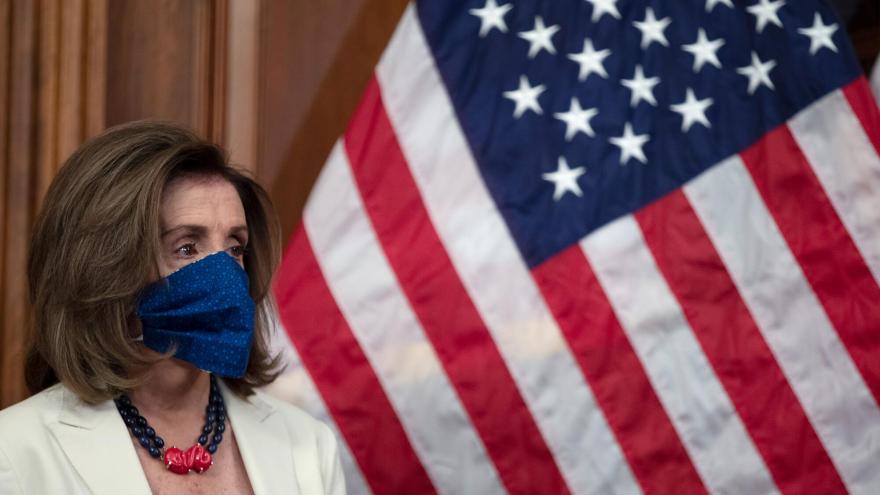 House Speaker Nancy Pelosi said in a letter to members on Thursday that DeJoy's decision is "wholly insufficient and does not reverse damage already wreaked."

(CNN) -- The House approved legislation Saturday to allocate $25 billion to the US Postal Service and ban operational changes that have slowed mail service around the country.

The bill passed 257-150, largely along party lines, with Democrats supporting it. More than two dozen Republicans joined Democrats in voting for the measure, defying House GOP leaders and President Donald Trump, who actively urged Republicans to oppose it. On the eve of the vote, the White House threatened to veto the bill. The measure isn't expected to reach Trump's desk, however, as the Republican-held Senate is unlikely to vote on it.

The Republicans who crossed party lines to vote for the legislation include a handful of members facing competitive reelections or retiring, others who sometimes buck their party and several from deep-red districts.

House Speaker Nancy Pelosi had predicted bipartisan support for the USPS legislation ahead of the vote Saturday.

"We will pass the bill and it will be in a bipartisan way today and then we will send it to the Senate," Pelosi said, adding that Republicans "will be hearing from their constituents because this hits home -- not receiving your mail in a timely fashion, hits home."

Democratic leaders introduced the measure, based on a bill sponsored by House Oversight and Reform Committee Chairwoman Carolyn Maloney, a Democrat from New York, after the Trump administration made policy changes at the USPS. Those moves included cutting overtime for employees, limiting post office hours, and removing some high-volume mail sorting machines from USPS facilities. Democrats argue the policies were intended to impede mail-in voting ahead of the November election. Postmaster General Louis DeJoy, an ally and donor of President Donald Trump, has denied the claims, saying the changes were intended to increase efficiency and save money.

Ahead of the vote, the House Oversight Committee on Saturday released new internal USPS documents that show postal service declines and delays since the beginning of July.

The August 12 internal USPS slide presentation prepared for the postmaster general, which was obtained and released by the committee, shows that there has been an overall drop in service across the board in first-class and priority mail, marketing and periodicals.

"To those who still claim there are 'no delays' and that these reports are just 'conspiracy theories,' I hope this new data causes them to re-think their position and support our urgent legislation today," Maloney said in a statement Saturday.

"We have all seen the headlines from every corner of our country, we have read the stories and seen pictures, we have heard directly from our constituents, and these new documents show that the delays are far worse than we were told," she added.

A USPS spokesperson on Saturday referred CNN to a fact sheet that includes information on the postal service's handling of election mail and its operational changes. The spokesperson told CNN DeJoy "looks forward to appearing" before the House Oversight Committee on Monday.

DeJoy said earlier this week that he would halt the changes until after the November election. Congressional Democrats were unsatisfied with the announcement. Pelosi said in a letter to members on Thursday that DeJoy's decision is "wholly insufficient and does not reverse damage already wreaked."

"Therefore, in the name of our democracy and the veterans, seniors, families and small businesses who depend on the Post Office, we will pass the Delivering for America Act," Pelosi wrote.

In a Senate hearing on Friday, DeJoy said the Postal Service is able to handle election mail.

"As we head into the election season, I want to assure this committee and the American public that the Postal Service is fully capable and committed to delivering the nation's election mail securely and on time," DeJoy told senators during the hearing. He also claimed he never spoke with President Donald Trump or anyone else at the White House about Postal Service changes or their potential impact on the November election.

The fight over the postal service is unfolding as Democrats and the Trump administration have not yet come together to successfully negotiate a new stimulus bill.

White House chief of staff Mark Meadows tweeted to Democrats on Saturday, saying, "If you really want to help Americans, how about passing relief for small businesses and unemployment assistance ALONG with postal funding?"

Congressional Democratic leaders have argued that the next stimulus should be a comprehensive package, and have indicated they do not want to take a piecemeal approach that will leave out what they describe as key priorities.

Initially, Democrats sought to include funding for the USPS in a larger coronavirus stimulus package, but negotiations between congressional Democrats and the White House for such a bill have broken down. During talks over the relief bill, the White House did reach a tentative agreement to include $10 billion for the Postal Service, people involved with the talks told CNN.

Administration officials are opposed to a USPS-specific bill, like the one passed Saturday. Meadows has called instead for a measure that would include pieces of the relief talks where the two sides agree, like another round of direct payments for Americans.