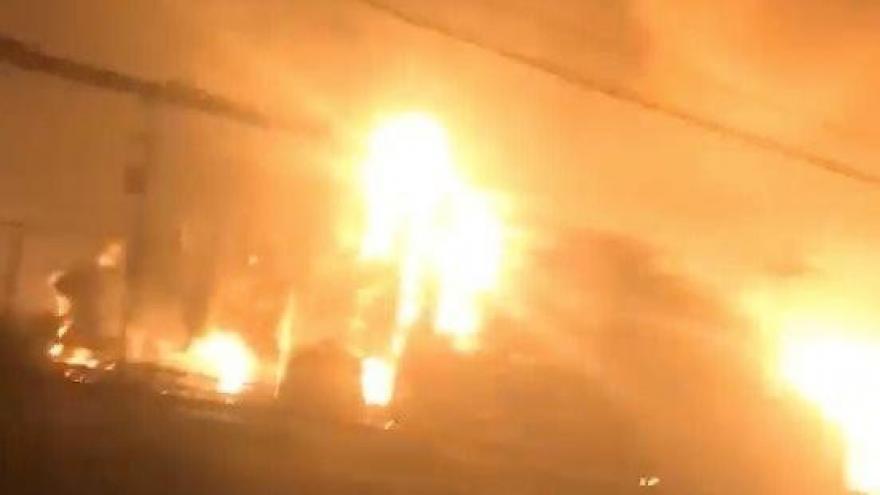 An explosion rocked a plant in Texas, blowing out windows at nearby homes and sending plumes of orange flames into the sky.

(CNN) -- Hours after explosions rocked a Texas chemical plant outside Houston early Wednesday, officials said there is no way to know how long a fire at the site will burn.

An early morning explosion at the TPC Group plant damaged the small city of Port Neches and injured at least three employees. A series of smaller explosions occurred throughout the day, and a larger one in the afternoon launched a tower into the air with balls of fire, authorities told reporters Wednesday night.

A mandatory evacuation was issued for areas within a 4-mile radius of plant because of the potential for more explosions.

Jefferson County Judge Jeff Branick, who issued the mandatory evacuation, said the initial explosion knocked out power to the plant. Authorities have no "ability to check the volume of available chemicals" and "no way to calculate burn rates" going forward, he said.

At least three tanks were on fire, and emergency response teams were on the plant site working to prevent the blaze from spreading, Troy Monk, director of health safety and security for TPC Group, which operates the Port Neches manufacturing plant about 90 miles east of Houston, told reporters.

Personnel were evacuated from the plant, which makes products for chemical and petroleum companies, said TPC Group. About 30 people -- out of 175 full-time employees and 50 contractors -- were on site at the time of the explosion, Monk said. He added that two injured employees and a contractor were treated and released from medical facilities.

The fire is burning a chemical called butadiene, police said. The colorless gas is considered a health hazard, according to the US National Library of Medicine. It is made from processing petroleum and is used to make synthetic rubber and plastics.

The Texas Commission on Environmental Quality said the butadiene levels at a monitoring station about 4 miles west of the incident, "are well below concentrations of health concern or odorous levels."

"There exists no danger to the public as a result of the plume thus far," Branick said.

Branick, the judge, said officials became concerned after the explosion launched the tower into the air "like a missile" in the direction of Port Neches-Groves High School.

There were no students at the school at the time but officials were worried other columns from the plant might be heaved into a nearby storage tank facility, causing more explosions, he said. Besides Port Neches, mandatory orders include the cities of Groves, Nederland and the northern part of Port Arthur.

"I assure you our top priority at the county and the cities is the public safety. And we'll do our best ... to return you to your homes as quickly as we can in a safe manner," Branick said.

From an office in Nederland, Kelly Berka saw the plumes of smoke from after the afternoon explosion.

"What a damned mess," Berka wrote on Twitter. "We're clearing out."

Berka told CNN her co-worker, who lives near the plant, had her front door blown off earlier in the morning before evacuating.

"Please stay off the roads anywhere near the refineries. Obey all the barricades that are in place," police said in a statement.

'I noticed an orange glow'

Some Port Neches residents said their windows were blown out by the blast. Monk said he awoke to his front and back doors being blown into their frames.

Tyler Shawn Dunlap was sleeping when the explosion rocked his house.

"I heard and felt my house shake. I first thought people were coming to break in 'cause of our intense security," he told CNN. "I went to dad's room, and he thought our generator blew up so we checked that, then I noticed an orange glow from the clouds."

Trent Lee said the explosion sounded like a nuclear detonation. It shook everything in Port Neches.

The blast was captured on Mia Hubert's doorbell camera, and left the area covered in a fiery hue.