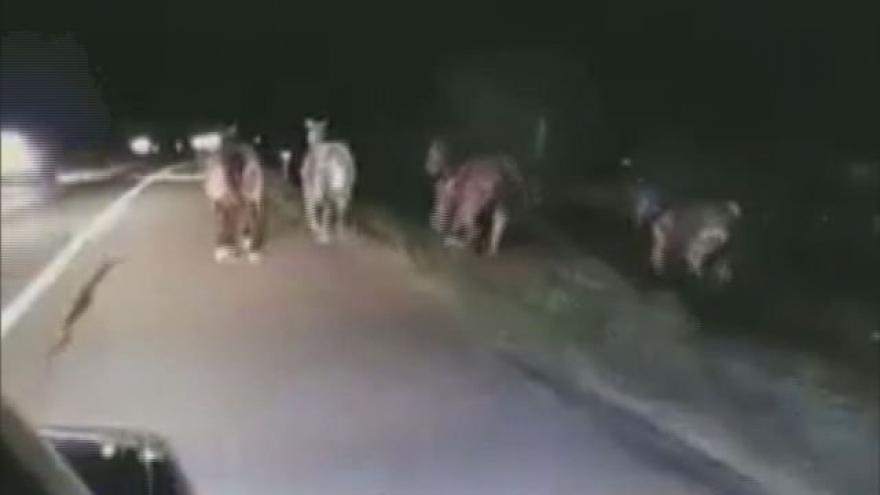 EAGLE, Colorado (KCNC) -- Horses were saved from a nearly fatal jaunt down Interstate 70 on Friday night thanks to the quick response of bystanders, local emergency officials and Colorado State Patrol. The unusual scene was all caught on video.

“We got notified of four horses that escaped makeshift barricade camp just west of our fairgrounds here, and that actually got spooked by an electric fence nearby, that one of them had bumped into and they all took off running,” said Trooper Jake Best.

The horses ended up running directly onto I-70, the worst-case scenario.

“These horses were not just on a walk or a trot,” said Best. “They were full sprinting, running down the interstate.”

Eagle County may be rural, but this scenario was anything, but typical. Luckily Best, born in raised in the area, knew exactly how to approach the situation.

From his dash cam, you can hear him trying to calm the horses. The Gypsum Fire Protection District captured a wide shot of the action which shows just how fast the horses were running.

“We even saw a cowboy riding down the interstate trying to catch up to them to rope them and stop that lead horse so my goal was to try and get in front of them and slow them down,” he said.

The horses began to run out of steam and as they slowed, so did the tone of Best who is heard calmly saying “woah,” which appears to help.

“In that section of the roadway there’s actually a wider spot with some soft dirt and grass that went down to a wildlife cutoff, so those horses were actually able to run down and slowly come to a stop in a fenced off area which ultimately stopped them,” he said.

He says once they stopped, bystanders were close by to help corral the horses to safety. None were injured.

“We were lucky there were enough cowboys in town the other night because otherwise we would’ve had a much larger mess.”