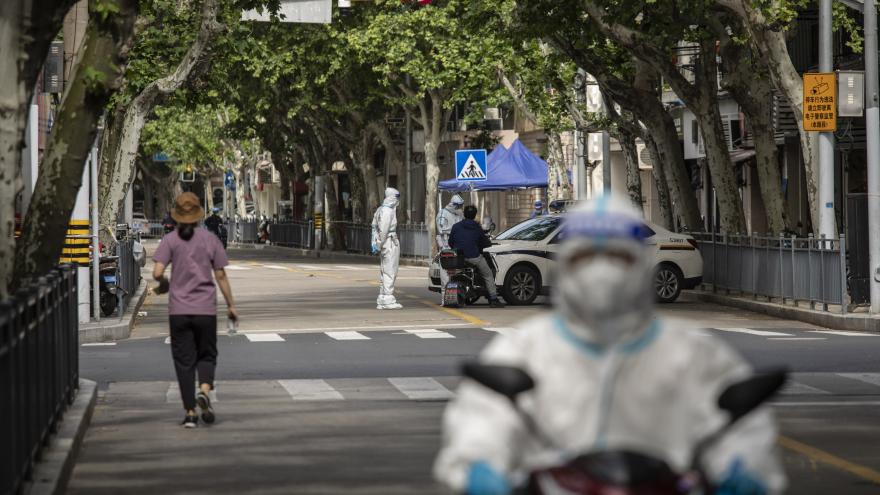 (CNN) -- An elderly Shanghai resident was mistakenly declared dead and taken to a morgue in a body bag, in the latest sign of dysfunction in the Covid-stricken city where millions of people remain under government-enforced lockdown.

Video footage, shot by a bystander, shows the moment several workers dressed head-to-toe in protective gear recoil as they realize the man is still alive. The footage has since gone viral on Chinese social media, sparking horror and outrage.

The video, posted on Sunday, shows the head of the man -- a nursing home resident -- appearing from the yellow body bag as the workers lift it from a vehicle.

The person filming the video, apparently from a nearby building, can be heard saying, "The nursing home is such a mess. They sent a living person on a hearse and said they were dead. The undertaker staff said they were still moving ... It is irresponsible, really irresponsible."

On China's Twitter-like platform Weibo, many expressed disbelief such a grave mistake could have happened -- especially in Shanghai, which has long been seen as China's most progressive and modern city.

"The problems in Shanghai are fully exposed this time," read one popular comment on Weibo.

"This counts as intentional homicide," wrote another user.

Many others pointed out the man could have been buried or cremated had he not been discovered alive. "The government doesn't care ... what is going on in Shanghai?" one comment read.

The district government responded to the incident on Monday, saying in a statement the elderly man was now in a stable condition.

Three officials have been removed from the district's civil affairs bureau and social development office, and the head of the nursing home has also been removed, it said.

Authorities have also revoked the certification of a doctor who was involved, and who is now under investigation, according to the state-run Global Times.

The financial hub has been battling an outbreak of Covid-19 cases since early March, and has now been under citywide lockdown since March 31. It has become the center of China's wider outbreak, with cases rising and lockdown measures being introduced in numerous cities.

For weeks, the lockdown prohibited nearly all 25 million residents from leaving their homes or residential compounds -- prompting logistical chaos, with many complaining they were unable to access basic goods like food, water, health products and even medical care for non-Covid emergencies.

As of Tuesday, more than 8.2 million Shanghai residents were still banned from leaving their residential compounds.

Meanwhile, cases are also rising in the national capital Beijing, where schools and other public spaces like libraries and shopping malls have been closed. More than 20 million residents will undergo three more rounds of mass testing this week, on top of several rounds implemented last week, authorities announced Monday.