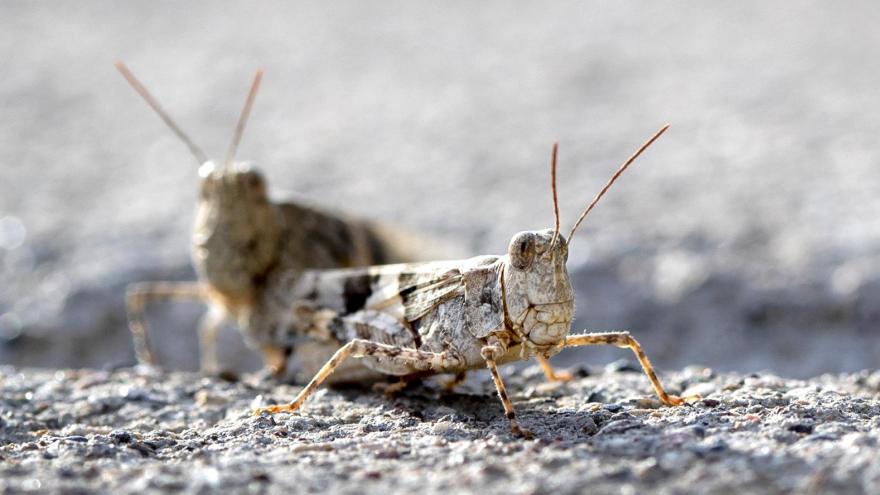 Grasshoppers relax on a sidewalk outside the Las Vegas Sun offices in Henderson, Nevada.

(CNN) -- Massive swarms of grasshoppers have descended upon Las Vegas this week, and it's startling some residents.

The winged insects may outnumber the humans in some parts of town, but it's not something to worry about. The pallid-winged grasshopper is a common desert species, a state entomologist said.

"It appears through history that when we have a wet winter or spring, these things build up often down below Laughlin and even into Arizona," Jeff Knight, state entomologist with the Nevada Department of Agriculture, said Thursday. "We'll have flights about this time of the year, migrations, and they'll move northward."

Nevada has seen more rain than usual this year. The state has averaged 9.94 inches of rain from January through June, nearly double the average of 5.92 inches, according to the National Oceanic and Atmospheric Administration. It's the third-wettest January to June on record for the state.

For Lyft driver Jessica Palmore, driving through the buggy night along the Strip is startling.

"When I see them, it's like being in a movie. Never seen nothing like this ever!" Palmore said Friday.

Palmore captured video of the bugs flying above the iconic Luxor Hotel & Casino on Thursday night.

"I know they are harmless, but they make me super itchy seeing them," she said.

It's not the first time these flocks of flying insects have swarmed Sin City before.

"We have records clear from the '60s of it happening, and I have seen it ... at least four or five times in my 30-plus years," Knight said. "There are some special weather conditions that trigger the migration."

When the grasshopper population gets big, that also triggers the insects to move to a new area, he said.

If residents are worried or want to deter the bugs, they can install amber or low-UV lights. The bugs won't hurt people, though.

"They don't carry any diseases. They don't bite," Knight said. "They're not even one of the species that we consider a problem. They probably won't cause much damage in the yard."