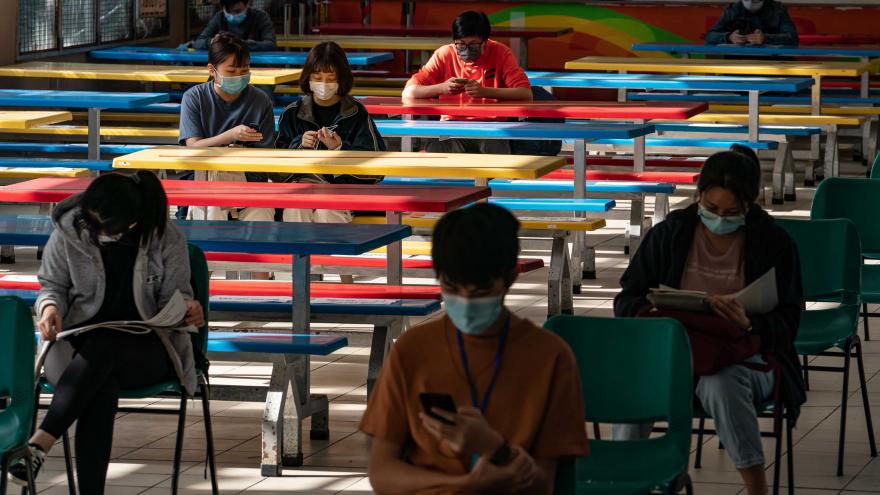 (CNN) -- A 33-year-old man living in Hong Kong had Covid-19 twice this year, according to preliminary research.

He had symptoms the first time around, but no obvious symptoms the second time, the team at the University of Hong Kong reported Monday.

The pre-print study -- which the University of Hong Kong said has been accepted for publication in the journal Clinical Infectious Diseases -- found that the man's second case of Covid-19 occurred 142 days after the first.

During his first episode of illness, the patient had a cough, sore throat, fever and headache for three days, according to the study. He tested positive for Covid-19 on March 26.

Then during his second episode, the patient was returning to Hong Kong from traveling in Spain via the United Kingdom, and he tested positive during his entry screening at the Hong Kong airport on August 15, the researchers said. The man was hospitalized again but remained asymptomatic.

"The patient got re-infected 4.5 months after the first infection. Therefore, it shows that for this patient, the immunity induced by the first infection is short lasting," Dr. Kelvin Kai-Wang To of the University of Hong Kong, who worked on the study, said in an email to CNN.

For the study, researchers at the university and various hospitals in Hong Kong analyzed specimens collected from the patient 10 days after his symptoms emerged in the first episode and then one day after hospitalization for the second episode.

"This case illustrates that re-infection can occur even just after a few months of recovery from the first infection. Our findings suggest that SARS-CoV-2 may persist in humans, as is the case for other common-cold associated human coronaviruses, even if patients have acquired immunity via natural infection or via vaccination," the researchers wrote.

The findings also show that people who have had coronavirus already should nonetheless get vaccinated if and when a vaccine becomes available, the researchers wrote.

. "Patients with previous COVID-19 infection should also comply with epidemiological control measures such as universal masking and social distancing," they wrote.

The researchers called this the "first case" of re-infection of Covid-19 in their paper, but other experts are calling for more research.

"What I think is really important is that we put this into context," Maria Van Kerkhove, the World Health Organization's technical lead for coronavirus response and head of the emerging diseases and zoonoses unit, said during a media briefing in Geneva on Monday.

"There's been more than 24 million cases reported to date. And we need to look at something like this on a population level. And so it's very important that we document this -- and that, in countries that can do this, if sequencing can be done, that would be very, very helpful. But we need to not jump to any conclusions," Van Kerkhove said.

"Even if this is the first documented case of reinfection, it is possible of course because with our experience with other human coronaviruses, and the MERS coronavirus and the SARS-CoV-1 coronavirus, we know that people have an antibody response for some time but it may wane."

This case of possible Covid-19 reinfection came as no surprise to Dr. Paul Hunter, a professor in medicine at the University of East Anglia's Norwich School of Medicine in Britain who was not involved in the new study.

"The report from Hong Kong of a re-infection in a man by COVID-19 that was genetically different from the first infection should not be too surprising. It is, however, important that this is documented," Hunter said in a written statement distributed by the UK-based Science Media Centre on Monday.

"Of particular note was that the case was a young and otherwise healthy person and that the second infection was diagnosed 4.5 months after the initial episode," he said.

"Commentators have been saying for some time that immunity is unlikely to be permanent and may only last a few months. Given the different intensity of the antibody response in people with mild or severe illness and the subsequent decay in levels, it is likely that those with a mild illness will have a shorter duration of immunity than those with severe illness."

Dr. Paul Offit, director of the Vaccine Education Center and professor of pediatrics at Children's Hospital of Philadephia, said it was "great news" that the man in the new study had no symptoms the second time he was infected.

"That's all you want to see," said Offit, who was not involved in the study.

He told CNN that this is a good indicator that a Covid-19 vaccine will do something similar.

"It's encouraging for the vaccine that his first infection induced an immune response that protected against disease," Offit said.

Overall, the new study "is a textbook example of how immunity should work," Akiko Iwasaki, of the Yale School of Medicine, who was not involved in the study, wrote in a Twitter post on Monday.

She added that since reinfection can occur, herd immunity by natural infection is unlikely to eliminate the novel coronavirus.

"The only safe and effective way to achieve herd immunity is through vaccination," Iwasaki tweeted. "Lastly, while this is a good example of how primary infection can prevent disease from subsequent infection, more studies are needed to understand the range of outcomes from reinfection."