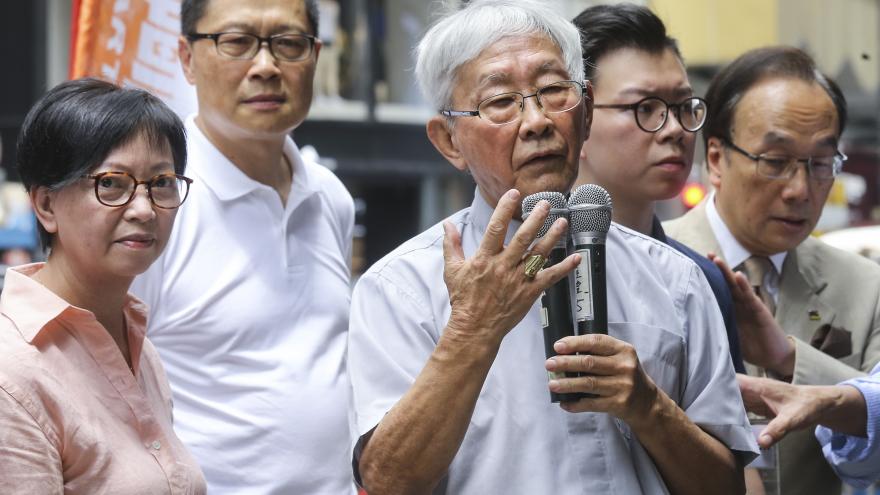 Zen is among four high-profile pro-democracy activists arrested by police -- the other three are Cantopop star Denise Ho, former lawmaker Margaret Ng and academic Hui Po-keung, according to the US State Department.

They were arrested on suspicion of collusion with foreign forces, a charge under the city's sweeping national security law, according to a statement from the Hong Kong Police Force.

The city's national security police alleged the four had asked foreign governments to impose sanctions on Hong Kong, which it said was an act endangering national security. The arrested were released on bail late on Wednesday night, according to the Hong Kong police.

Their arrests are part of a probe into a now-disbanded relief fund for the city's pro-democracy, anti-government protests in 2019, according to public broadcaster RTHK.

The four were trustees of the 612 Humanitarian Relief Fund, which was set up in June 2019 to provide financial aid and legal advice for protesters who were injured or arrested. The fund ceased operation last year, after national security police announced they had launched an investigation into its donation sources and whether its operations involved any contravention of the national security law.

Zen was the former top Roman Catholic cleric in Hong Kong. He is one of the city's most outspoken critics of both the Hong Kong government and Beijing, and is known as the "conscience of Hong Kong" among his supporters.

Responding to Zen's arrest, the Vatican said it learned of the news with "concern" and that it is "following the evolution of the situation with extreme attention," it told CNN in a statement.

The arrests also prompted condemnation from the US and Europe.

"In arresting these veteran activists, scholars and religious leaders under the so-called national security law, Hong Kong authorities have again demonstrated they will pursue all means necessary to stifle dissent and undercut protective rights and freedoms," US State Department spokesperson Ned Price said at a press briefing Wednesday.

The European Union's top diplomat, High Representative Josep Borrell, said on Twitter he was following the developments with "great concern." "The fundamental freedoms, as guaranteed in the Hong Kong Basic Law and in the Sino-British Joint Declaration, must be respected," Borrell said.

Amnesty International's Asia-Pacific Regional Director Erwin van der Borght said in a statement that the arrests represent a "shocking escalation" even by "Hong Kong's recent standards of worsening repression," and demonstrates the Hong Kong authorities' "callous disregard for the basic rights of its citizens."

The arrests came days after John Lee, a former police officer and security chief, was selected as Hong Kong's next leader on Sunday.

They are the latest in a sweeping crackdown on Hong Kong's pro-democracy movement, following the imposition of a controversial National Security Law on the city in 2020. Since then, most of the city's prominent pro-democracy figures have either been arrested or gone into exile, while many independent media outlets and non-government organizations were shuttered.

The Hong Kong government has repeatedly denied criticism that the law -- which criminalizes acts of secession, subversion, terrorism, and collusion with foreign forces -- has stifled freedoms, claiming instead it has restored order in the city after the 2019 protest movement.