Honeybees use poop to ward off those terrifying murder hornets 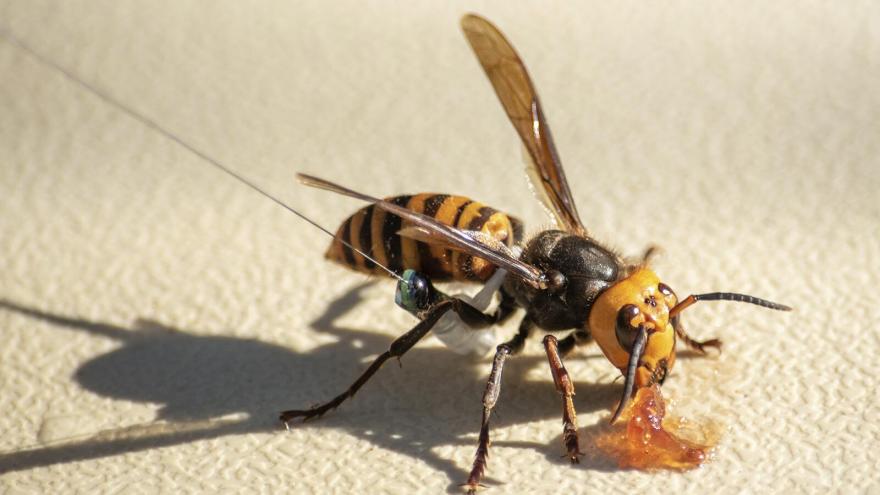 In photo provided by the Washington State Dept. of Agriculture, an Asian Giant Hornet wearing a tracking device is shown Thursday, Oct. 22, 2020 near Blaine, Wash. These hornets are known for attacking and destroying honeybee nests.

(CNN) -- The smell of poop is a strong repellant -- even against murder hornets.

That's according to new research from the University of Guelph, and published Wednesday in PLOS One.

The team of researchers found that honeybees in Vietnam collect animal poop and put it around the entrances of their nests in an effort to protect them from fatal murder hornet raids.

"Workers collected feces at our dung piles throughout the study; we also observed them foraging for feces in a nearby chicken coop," researchers wrote, also noting that worker bees sometimes used soap scum and, on one occasion, human pee.

Using poop as a defense tactic

The team surveyed 72 beekeepers in late August, when attacks by murder hornets are frequent. Of those beekeepers, five kept colonies of only Western honeybees -- and those keepers did not see the mounds of poop on their hives, the study says.

But of the 67 remaining beekeepers, who kept Eastern honeybees, 63 of them reported spots on the front of their hives. The beekeepers had a median of 15 colonies per keeper, and the keepers reported seeing the poop spots on an average of 74% of their colonies. The mounds of poop appeared following attacks from murder hornets, and researchers determined that they were a response to the atacks.

And it worked -- researchers found that colonies with heavy to moderate spotting of poop had a reduced likelihood of being attacked, researchers said.

"This study demonstrates a fairly remarkable trait these bees have to defend themselves against a really awful predator," said Heather Mattila, lead author of the study, in a statement.

This is the first research that has reported that these Eastern honeybee workers forage and use animal feces to defend themselves, and the team stated there's no evidence the bees use the poop for much else.

But Western honeybees, the ones found in North America, aren't as prepared for murder hornet attacks as their counterparts in the east.

"They haven't had the opportunity to evolve defences," Mattila said. "It's like going into a war cold."

And the murder hornets, native to Asia, have recently found their way to North America. Last month, entomologists from the Washington State Department of Agriculture destroyed a murder hornet nest that they had located in October, and discovered nearly 200 queens inside, each capable of producing their own nests.

What makes murder hornets so dangerous is that they, like their name suggests, essentially murder honey bees and their nests, wreaking havoc by killing the entire hive in just a few hours. Since honey bees, through pollenization, play a significant role in our environment and are already disappearing, murder hornets are especially dangerous.