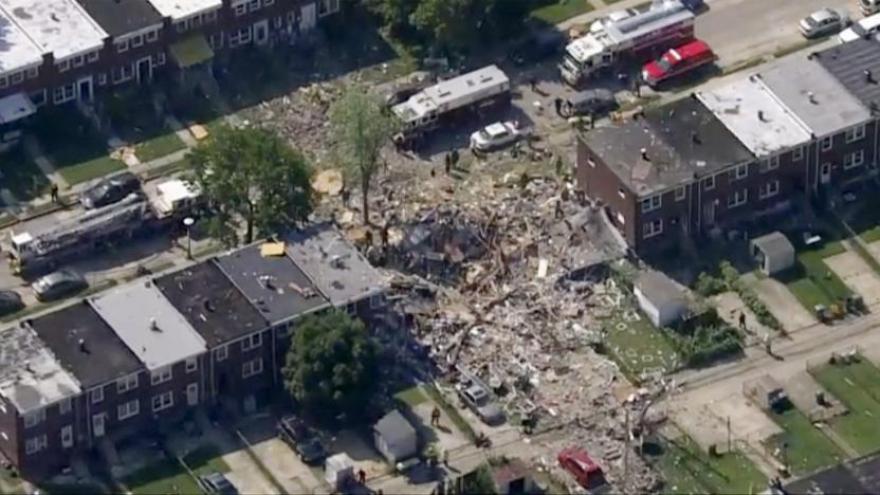 This photo from WJLA-TV shows the scene of an explosion in Baltimore on Monday.

(CNN) -- Emergency responders continued to dig through the rubble Monday night after a major explosion in a Baltimore neighborhood killed a woman and injured seven others.

Earlier, Adams said six people had been hospitalized in serious condition. Monday night the department upped the total of injured to seven but did not give their conditions.

Officials are investigating the cause, and crews are searching for people who might be trapped inside. After the blast, some authorities said they thought it was a gas explosion.

In a statement from the Baltimore Gas and Electric Co., provided by spokeswoman Tasha Jamerson, the company said that no gas readings were found in any of the buildings and no leaks were found on the gas main.

No gas odors were reported before the explosion, BGE said.

"Our crews are continuing to inspect area gas mains and services for safety and will make any necessary repairs if any issues are found," the statement reads.

The fire department said it is conducting an intensive search for survivors.

"You have homes that were pretty much crumbled ... a ton of debris on the ground, so we're pulling and trying to comb through to see if we can find any additional occupants," Adams said Monday morning.

Dean Jones, who lives a few blocks away, told CNN affiliate WJZ he was sitting on his porch when the explosion shook his house.

"It was catastrophic. It was like a bomb, like you watch things in other countries where they have, like, bombings and things like that," Jones said. "It was like watching that in real life. Telephone poles split. I mean, houses down the block, broken glass.

"When I initially got there, I could hear a voice just saying, 'Help.' It's crazy."

Mobley Mannie told CNN affiliate WMAR he was driving when he saw a blinding light and heard the explosion.

"I looked back, all I could see was stuff, debris flying through the air," he told the station.

A woman told WMAR she ran toward the scene of the blast. She said her male neighbors rushed to help without concern for themselves.

She said the men were throwing bricks out of the way. "They didn't care about the live wires," she added.

Jones told WJZ he heard a voice crying for help so he and others started digging.

He said he moved aside debris, including parts of a fence, and he heard the gas hissing.

Maryland Gov. Lary Hogan said the state Fire Marshal, the Maryland Emergency Management Agency and the Maryland Public Service Commission are all helping with the recovery.

"So far, we know that the explosion has taken one life. Our prayers are with the victims and all those affected by this tragedy," he said in a statement.

Last August, a gas explosion destroyed a building in a shopping center in Columbia, Maryland.

The Baltimore Sun reported last September that natural gas has been leaking out of old pipes increasingly in recent years. At the current rate, efforts by Baltimore Gas and Electric Co. to replace the pipes will take at least two decades, the Sun reported.

Jamerson said the company has undertaken an initiative to replace the worst old pipes. The pipes in this area were installed in the 1960s, she said. She said they were inspected a little more than a year ago and no leaks were discovered then.

On its website, Baltimore Gas and Electric, the nation's oldest gas company, said it provides gas to more than 680,000 customers and has more than 7,600 miles of natural gas pipeline.