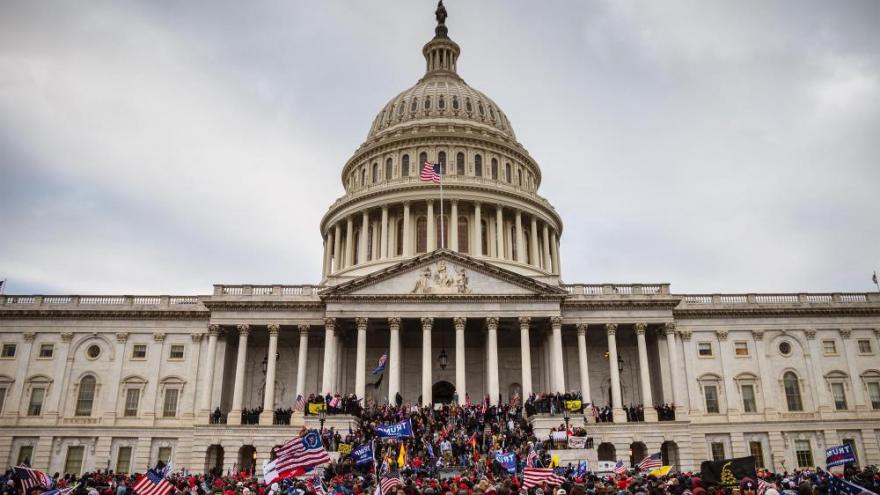 The Department of Homeland Security warned state and local authorities about an increase in calls for violence online tied to election-related conspiracy theories, according to a law enforcement source.

(CNN) -- The Department of Homeland Security warned state and local authorities Friday about an increase in calls for violence online tied to election-related conspiracy theories, according to a law enforcement source.

In an effort to prevent online threats from manifesting in violent acts, DHS issued a public safety notification to reach law enforcement throughout the United States.

"[D]HS is providing awareness of reports regarding an increasing but modest level of activity online calling for violence in response to unsubstantiated claims of fraud related to the 2020 election and the alleged 'reinstatement' of former President Trump," the public safety notification said, according to the source.

The notification was first reported by ABC News.

The warning, which does not contain a specific threat, comes amid a resurgence of false claims about the 2020 election, pushed in part by Mike Lindell, MyPillow CEO and a close ally of former President Donald Trump, who has emerged as one of the most vocal proponents of these conspiracy theories.

"As public visibility of the narratives increases, we are concerned about more calls to violence. Reporting indicates that the timing of these activities may occur during August 2021, although we lack information on specific plots or planned actions," the notification says, according to the source.

A department spokesperson told CNN in a statement that "the Department of Homeland Security regularly shares information regarding the heightened threat environment with federal, state, local, tribal, and territorial officials to ensure the safety and security of all communities across the country."

The spokesperson confirmed that the DHS Office of Intelligence and Analysis issued a Public Safety Situational Awareness Notification to federal, state and local officials.

There is a heightened terrorism-related threat environment in the US, according to the spokesperson, and DHS is aware of previous instances of violence associated with the dissemination of disinformation and conspiracy theories about the 2020 election.

For weeks, the federal government has been aware of online narratives focused on reinstatement, particularly on platforms associated with promoting conspiracy theories, like QAnon, and forums where extremists tend to engage, the source said.

While "modest," there is a concern that those conspiracy theories are being "woven into calls for violence," the source added, pointing to the need for greater awareness of the issue throughout the US.

In the current threat environment, DHS is especially concerned that lone offenders and small groups of individuals would potentially view these narratives as justification to act out violently, according to the source.

Some of the online rhetoric directly references January 6. There are also calls for violence in Washington, DC, and state capitols across the country, the source said.

In additional to the Lindell-backed false claims, another conspiracy theory relates to the upcoming FEMA test of the nationwide emergency alert system, according to the source, with some viewing it as a so-called "go code."

The notification is based on the department's "assessment of the current threat environment in its similarity to situations to 2020 and 2021 that manifested in acts of violence and destructive behavior by individuals and groups, including the 6 January 2021 breach of the US Capitol," according to the source.

Dissemination of the notification will be followed up with additional meetings between the FBI, DHS and state and local law enforcement to evaluate the threat and assess whether more is needed to mitigate the risk, the source said.

This story has been updated with a statement from the Department of Homeland Security.