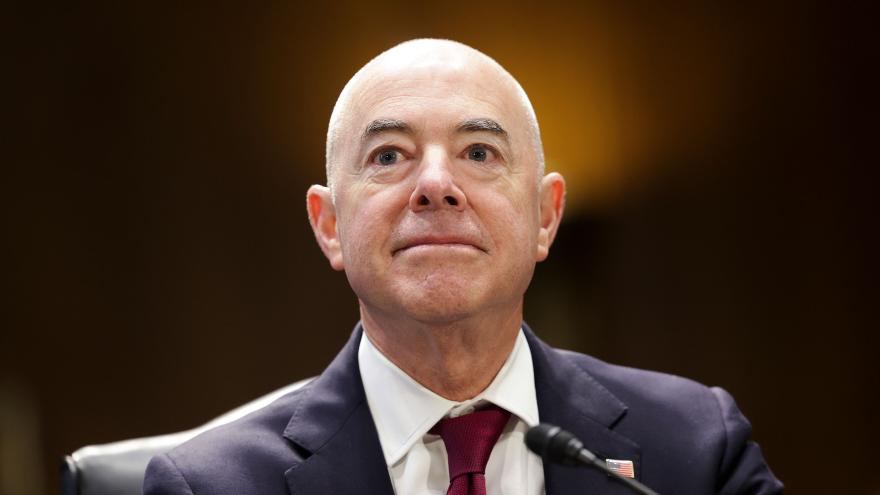 (CNN) -- Homeland Security Secretary Alejandro Mayorkas on Sunday warned migrants "not to take the dangerous journey" and attempt to cross the US-Mexico border after 53 migrants died in a sweltering semitruck in San Antonio, Texas, last week, in what is being called the deadliest human smuggling incident in US history.

"We have said repeatedly, and we continue to warn people not to take the dangerous journey," Mayorkas told CBS News in an interview. "We saw so tragically in San Antonio, Texas, one of the possible tragic results of that dangerous journey, and so many people don't even make it that far in the hands of exploitative smugglers."

The migrants were found on Monday after an employee at a nearby building heard cries for help. More than a dozen people were found alive inside the tractor-trailer and hospitalized for heat-related conditions, according to San Antonio authorities. At least four people have been charged so far.

Mayorkas declined to weigh in on the details of the tragic incident, including assertions by Texas Democratic Rep. Henry Cuellar that the truck was "waved through" a checkpoint in Laredo, Texas, due to traffic concerns.

"I think the facts are still under investigation. It's a criminal case. I won't speak about the particulars -- those facts will be elicited in a court of law as the prosecution proceeds," Mayorkas told ABC News in a separate interview Sunday.

The tragedy in San Antonio followed a launch by US federal authorities of what they have described as an "unprecedented" operation to disrupt human smuggling networks amid an influx of migrants at the US-Mexico border.

"Exploiting vulnerable individuals for profit is shameful, as is political grandstanding around tragedy, and my administration will continue to do everything possible to stop human smugglers and traffickers from taking advantage of people who are seeking to enter the United States between ports of entry," President Joe Biden said in a statement responding to the death of the migrants last week.

Under the 2019 program, formally known as Migrant Protection Protocols, certain non-Mexican migrants who entered the US were sent back to Mexico -- instead of detaining them or releasing them into the United States -- while their immigration proceedings played out.

While officials at the time said it would stop migrants from taking advantage of the immigration system while keeping them safe, immigrant advocacy groups have said forcing asylum-seekers to wait in Mexico while their cases make their way through US courts puts vulnerable people in even more dangerous situations.

A hold on Biden's bid to end the program remains in place, but Thursday's ruling suggested the order should be lifted shortly.

"We need to wait until the Supreme Court's decision is actually communicated to the lower court, to the federal district court in the Northern District of Texas, and once that occurs, the district court should lift its injunction that's preventing us from ending the program," Mayorkas said. "So, we have to wait several weeks for that procedural step to be taken."

On CBS, Mayorkas said the US will "continue to enforce immigration law, as it is our legal responsibility," adding that the migrants in San Antonio "received false information from smugglers (and) put their lives, their life savings in the hands of these exploitative organizations, these criminal organizations, that do not care for their lives, and only seek to make a profit."

The secretary pushed back against Republican criticisms that migrants apprehended at the border are released into the United States, telling CBS that asylum-seekers "are placed in immigration enforcement proceedings ... and if those claims are unsuccessful, they will be swiftly removed from the United States."

Meanwhile, Mayorkas said last months' US Supreme Court's ruling to overturn Roe v. Wade "has really heightened the threat environment" surrounding the court and said his department has "deployed resources to ensure the safety and security of the Supreme Court and the justices."

"We in the Department of Homeland Security have deployed personnel for that purpose," he said. "We do not condone violence, and law enforcement will and has responded to acts of violence when people do not honor their freedom to protest peacefully, but instead violate the laws of our country and the states within it."