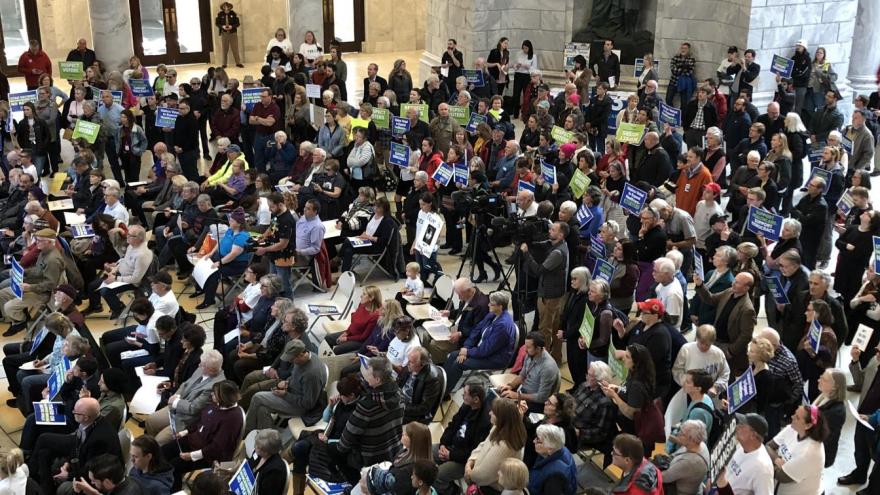 The national conversation around health care is increasingly about "Medicare for All," but Democrats are still working to bring Republican states on board with expanding access to a different government program -- Medicaid

(CNN) -- The national conversation around health care is increasingly about "Medicare for All," but Democrats are still working to bring Republican states on board with expanding access to a different government program -- Medicaid.

Under the Affordable Care Act, states can get federal money to pay for adding people to the program for low-income Americans, but 14 states never accepted it.

Kansas lawmakers have taken the first step toward passing Medicaid expansion, with the Republican-dominated legislature last week voting in favor, two years after a similar initiative was vetoed by former Republican Gov. Sam Brownback. The state's current Democratic Gov. Laura Kelly, who made Medicaid expansion a centerpiece of her 2018 campaign, has vowed to sign the bill if it passes.

"I am optimistic that we will get this done. I know that there are a number of legislators that are very interested in getting Medicaid expanded," Kelly told CNN. "They know this time there will be no veto."

With Republican-led efforts in Washington to repeal Obamacare effectively dead, health care advocacy groups say they are hoping that holdout states will be more willing to accept funds available under the 2010 law.

The Affordable Care Act allows states to extend coverage to all individuals whose income is at or below 138% of the poverty line. The federal government covers at least 90% of the cost of the policy, while the state picks up the remainder. While many states approved expansion immediately others were slower to it, Maine and Virginia officially expanded at the beginning of this year.

The policy's connection to Obamacare combined with concerns over cost sparked resistance in predominantly conservative states, but the 2017 repeal and replace debate "created a heightened public understanding and support" for Medicaid, said Patricia Boozang, senior managing director of Manatt Health, a law firm that provides counsel on health care issues.

Kelly echoed that view, saying that public demand for access to health coverage has grown over the years, partly due to the closure of rural hospitals.

"When Medicaid expansion first came up the opposition just really tried to paint it as 'Obamacare' so there were a number of people who were opposed to it just because they thought it was 'Obamacare,'" Kelly said. "What we have seen over the six years though is Kansans really understand better exactly what it is and how important it is that we do that."

North Carolina and Wisconsin may follow suit. Like Kansas, each have a Democratic governor but a Republican-majority legislature.

"The state's political climate is also different now, with less uncertainty over major federal changes to the health care system and growing energy in both parties for increasing access to affordable health insurance and closing the coverage gap," said Mandy Cohen, North Carolina secretary of health and human services.

Non-profit groups are planning to target states that allow ballot measures after successful passage of Medicaid expansion initiatives in Idaho, Nebraska and Utah in 2018 -- although Republicans in both Idaho and Utah have taken steps to limit their implementation.

Despite a trend toward limited expansion, states like Texas, Alabama and South Carolina aren't expected to move on Medicaid expansion anytime soon.

"I never say never so we could be surprised," said Larissa Antoniesse, a policy analyst for the nonprofit Kaiser Family Foundation, which specializes in health care research. "It doesn't seem like there's a strong chance for expansion in those states."