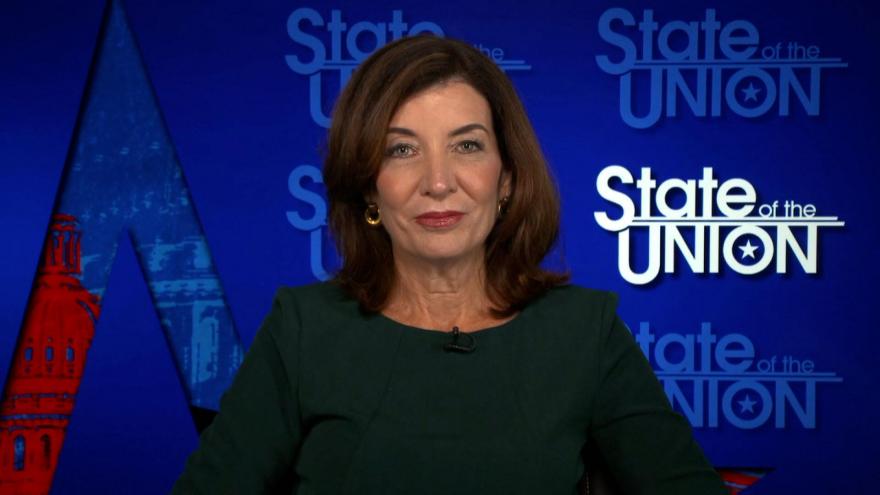 "It won't be difficult for me. Everyone who has known my career over 27 years of elected office knows that I have very high ethical standards and I will go in there and literally say, 'It is a whole new day.' Zero tolerance," Hochul told CNN's Jake Tapper on "State of the Union." "I'm going to be very firm in my expectations on how my administration conducts themselves throughout the entire work force but also I want people to know, particularly young women like I was once a young intern working in Buffalo in Democratic politics, I want them to know this is a place they're welcome."

She continued, "They'll feel safe. They'll know their ideas are valued. So I don't think it is going to take a lot for that tone to change on day one, and I'm excited about that."

Hochul is preparing to steer the New York political landscape that Cuomo has long dominated and restructure a working environment that has faced allegations of sexual harassment against female staffers.

In the wake of New York State Attorney General Letitia James' report that concluded Cuomo sexually harassed 11 women and created a "hostile" work environment for women, Hochul, 62, denounced his alleged behavior as "repulsive & unlawful." Cuomo has denied some of the report's allegations while claiming that other aspects of his behavior detailed in the report were taken out of context.

"Sexual harassment is unacceptable in any workplace, and certainly not in public service," Hochul wrote on Twitter. "I believe these brave women & admire their courage coming forward."

She has served as Cuomo's lieutenant for nearly the last seven years.

Asked why she stayed silent about the allegations against Cuomo, Hochul told Tapper she was not in the room where his alleged actions took place.

"Well, the people who know me know that I've not been close to the governor. I've not been in the rooms where any of these actions occurred. My role as lieutenant governor for seven years has really been to spend as little time in Albany as possible except when I'm presiding over the Senate," she said. "I am not in the room, so if you don't know something you can't talk about it. ... My position is unwavering in my tolerance for the future work force which is what I am responsible for, that this will not occur."

On Friday, New York State Assembly Speaker Carl Heastie announced an impeachment investigation against the three-term governor would be suspended.