Ho Oh No! Santa gets tangled up in some power lines 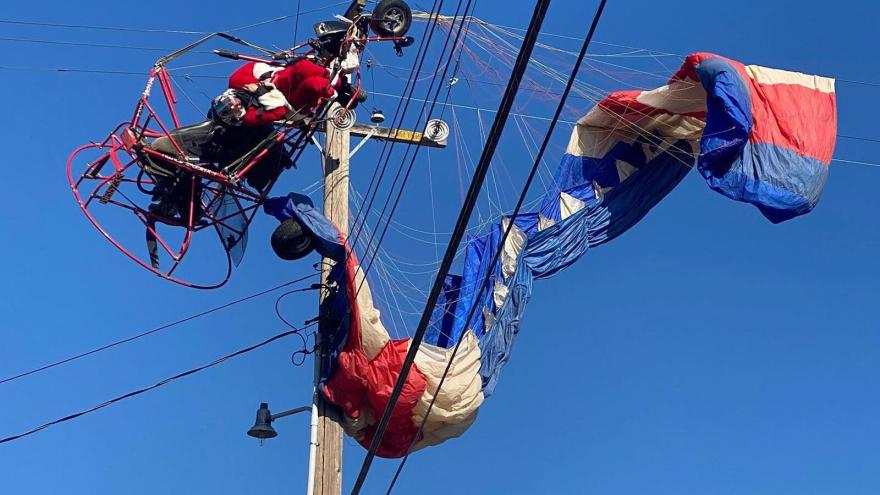 A few days ahead of Christmas, a California pilot dressed as Santa got tangled up in some power lines in Sacramento County. He was safely recovered and uninjured.

(CNN) -- Instead of helming Santa's sleigh, a Santa Claus impersonator took to the skies in a hang glider-like aircraft to spread some early holiday cheer -- and wound up tangled in power lines.

The would-be Kris Kringle was safely rescued on the Sunday before Christmas after spending an hour suspended above the ground in Rio Linda, a city in California's Sacramento County.

His mishap, however festive, shows why civilians should perhaps leave the more magical elements of Christmas to the real jolly old man in red.

Without Santa's reindeer, the man delivered his gifts in a recreational aircraft that the fire department described as a "hyper light." It uses a small motor and "blower" to propel it while a large parachute catches the wind and keeps it in flight, Vestal said.

The department still isn't sure how Santa wound up where he did -- recreational aircraft like his don't need to report their flight patterns, Vestal said.

But at one point during his flight, his "sleigh" and its large chute got tangled up in the lines.

When California Highway Patrol of North Sacramento and fire crews arrived, the craft was hanging off one side of the power lines.

Despite the glider's precarious position, Santa wasn't in danger of falling onto the pavement below, Vestal said, because he was wearing a seatbelt.

"Without any doubt, the restraints prevented him from injury and likely saved not only Santa's life, but Christmas," he said.

A local utility company "de-energized" the power lines before the fire crew made their rescue.

With Metro Fire employees dangling from a large ladder, Santa was safely lowered to the ground within an hour of the team's arrival.

Claus wasn't injured at any point during the entanglement or rescue, Vestal said.

Though the fire department regularly responds to small aircraft incidents at nearby airports, Vestal said this was its first Santa rescue.