NOW: Historic Saharan dust plume is darkening skies in Caribbean and will soon stretch into the US including Wisconsin

(CNN) -- The current Saharan dust episode is leading to the worst dust storm in the Caribbean in decades.

Over the weekend, Saharan dust moved into the Caribbean. By Monday, it had changed the tropical blue skies into a hazy brown-gray color.

On Tuesday, this sunset enhancing, blue sky limiting, tropical threat reducing dust plume continues its 5,000-mile journey toward the US.

But before it does, it is leaving these pristine islands with a few more days with one the most significant dust events seen in the Caribbean.

"It is definitely historic," Olga Mayol-Bracero, a researcher at the University of Puerto Rico told CNN Weather. "We knew we were going to be in an extraordinary situation."

Many of her colleagues across the Caribbean said they have not seen air quality conditions this bad in their entire careers.

Aerosols, measured in PM10, at Mayol-Bracero's research station in northeastern Puerto Rico, have never reached the levels they have seen the past few days. Records at this station go back 15 years. 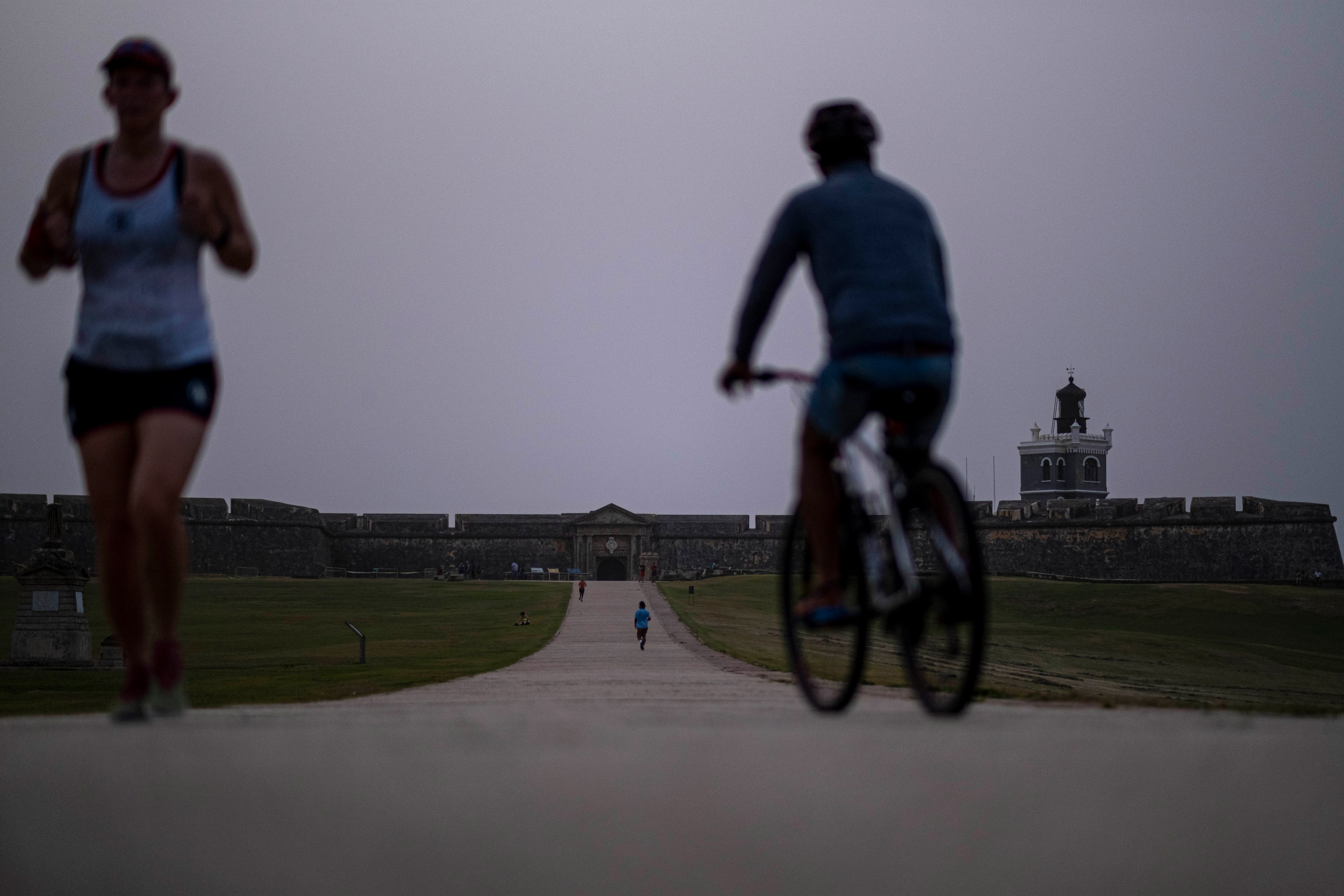 It is unusual that the dust is forecast to travel over central America and the US with such high concentrations, Claire Ryder, NERC Independent Research Fellow at the University of Reading, told CNN Weather.

"Usually by the time dust from the Sahara has traveled this far, much of it has been dispersed and/or deposited to the ocean so that typically this long-range transport to the Americas would involve much lower concentrations," Ryder said.

The initial dust outbreak was driven by a few different smaller storm systems over central and west Africa. Several of these thunderstorms caused downdrafts and large-scale haboobs (dust storms) to develop. This led to a large amount of dust being uplifted into the atmosphere from the Sahara, according to Ryder.

At the same time, these smaller dust storms were happening. The African Easterly Jet, strong winds higher in the atmosphere which usually transports dust westwards, was anomalously weak this June.

Meaning a larger amount of dust than usual was able to accumulate just off the west coast of Africa. It was able to then be transported westwards in a very dense plume when the jet picked up speed again.

This increase in dust thickness has led to the dirty looking skies seen across the Caribbean and the historically poor air quality.

"It's certainly the most intense, large-scale dust event I have ever seen," Ryder said.

The dust layer is so thick you can see it on weather satellites. Astronauts have also gotten a good view of it from the international space station.

"We flew over this Saharan dust plume today in the west central Atlantic,' Astronaut Doug Hurly tweeted on Sunday. "Amazing how large an area it covers!" 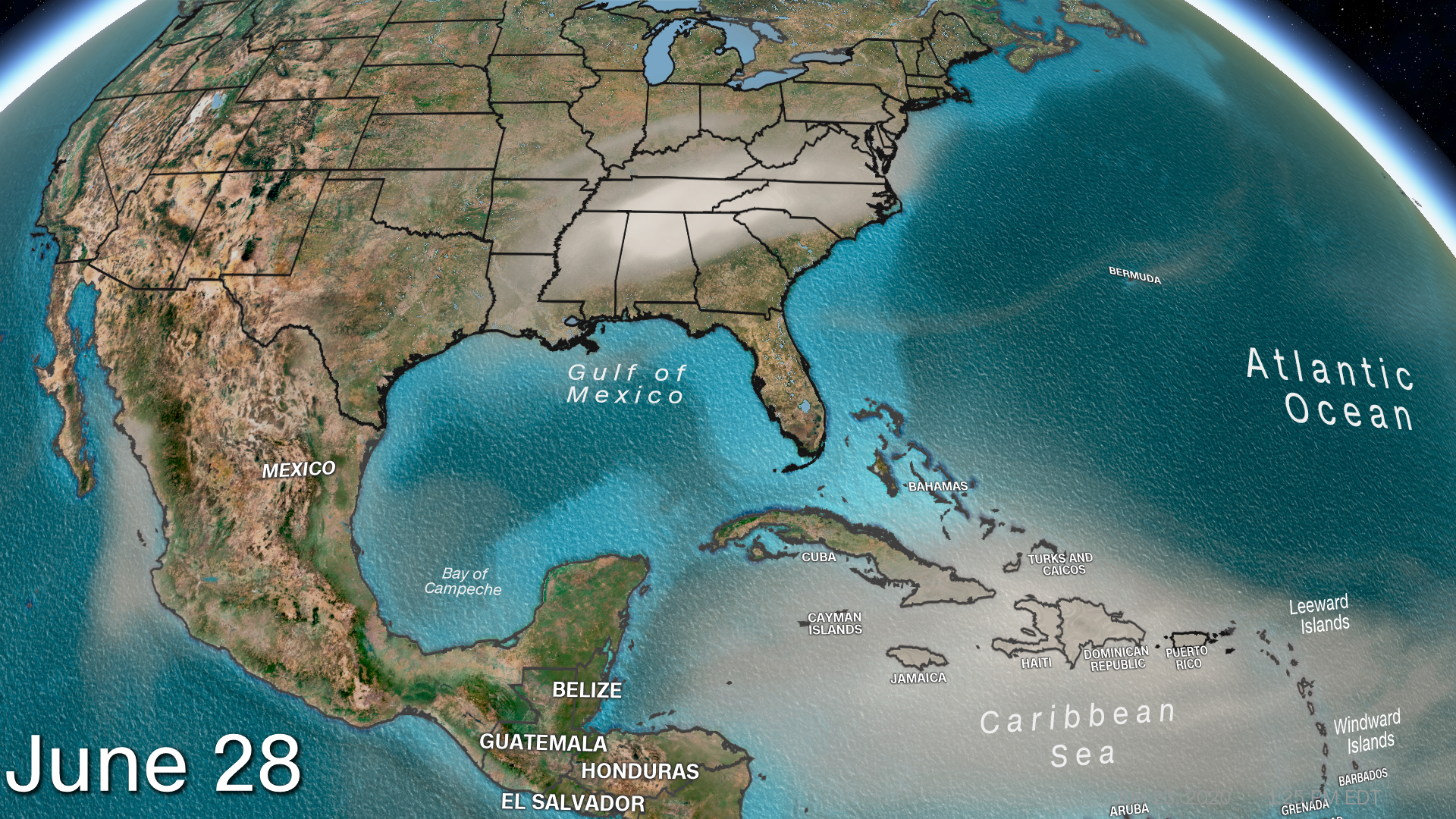 The Saharan dust will reach the US by Thursday morning

On Wednesday, the dust is forecast to move across the Gulf of Mexico toward Texas.

Thursday morning, people in places like Brownsville in Texas and Houston will likely wake up to a beautiful sunrise and a hazier than normal sky.

This thicker layer is likely to reach Texas by Friday and then take a turn to the east. If the forecast model is right, it will move over most of the Southeast and MidAtlantic states over the weekend.

Once it arrives, here are the top 3 ways you'll notice next week's Saharan dust in the US, wrote CNN meteorologist Tyler Mauldin.

A difference in the sky

One of the first things you'll notice when the Saharan dust layer arrives is that your typical blue sky will have more of a milky haze to it.

That milky haze is the Saharan dust. Those tiny dust particles lofted tens of thousands of feet in the air do a great job of scattering the sun's rays at dusk and dawn, too, which gives way to stunning sunrises and sunsets.

So, grab those cameras!

Less tropical activity in the Atlantic

The Saharan dust to a hurricane is nothing more than extremely dry air. Hurricanes hate dry air. A hurricane needs a hot, humid and calm environment.

As long as the Saharan dust is around ... it's likely you'll see the National Hurricane Center watching fewer areas in the tropics.

The tiny dust particles that give way to beautiful sunrises and sunsets and help suppress hurricane development don't always stay at 30,000 feet. Sometimes particles can make their way to the surface, greatly affecting those with sensitive allergies.

If you find yourself reaching for a tissue this week -- or your iPhone to post yet another awesome sunset pic to Instagram -- thank the Saharan dust.

Coronavirus silences Summerfest 2020 -- here's a look ahead to next year

The New York City Marathon, the world's largest, has been canceled due to the pandemic