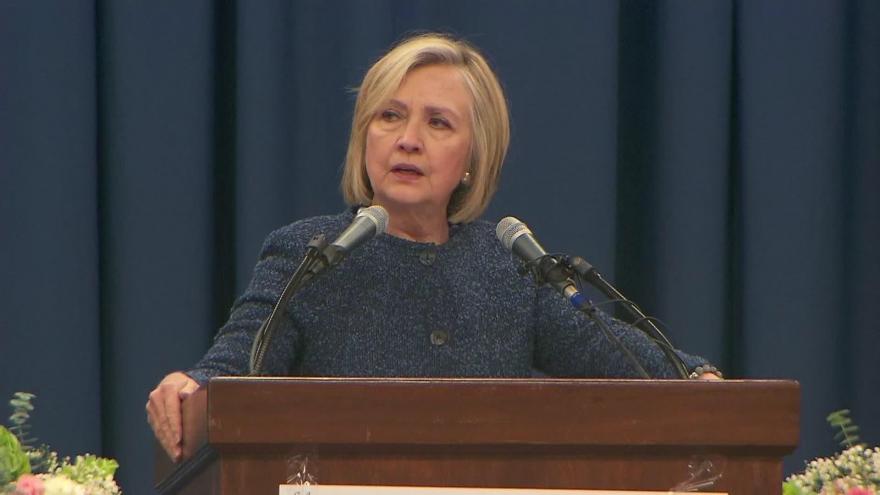 Hillary Clinton said Monday that she is not running for president in 2020 but will continue to speak out about politics, saying, "I'm not going anywhere."

(CNN) -- Hillary Clinton said Monday that she is not running for president in 2020 but will continue to speak out about politics, saying, "I'm not going anywhere."

"I'm not running, but I'm going to keep on working and speaking and standing up for what I believe," the 2016 Democratic presidential nominee told CNN affiliate News 12 Westchester.

"I want to be sure that people understand I'm going to keep speaking out. I'm not going anywhere," Clinton said.

Clinton's comments put to rest speculation she was considering a 2020 bid.

Three people told CNN in January that Clinton was telling people she had not closed the door to the idea of another presidential run. This was in the wake of the announcements of indictments by special counsel Robert Mueller, who is investigating Russian interference in the 2016 election and whether the Trump campaign was involved.

At the time, a close Clinton friend said it would still be a big surprise to them if she launched a 2020 bid.

Clinton's former campaign chairman John Podesta told CNN in January that he took her at her word that she did not intend to run for president in 2020.

Clinton has said she is not running for president a number of times before.

In an interview with Recode's Kara Swisher in October, Clinton said "No. No," when asked if she was going to run in 2020. But her full answer raised eyebrows, and seemed to leave open the possibility.

"Well, I'd like to be president," Clinton said, when pressed by Swisher. "I think, hopefully, when we have a Democrat in the Oval Office in January of 2021, there's going to be so much work to be done."

She added, "The work would be work that I feel very well prepared for, having been at the Senate for eight years, having been a diplomat in the State Department, and it's just going to be a lot of heavy lifting."

Clinton also told "CBS Sunday Morning" in September 2017, "I am done with being a candidate," while promoting her latest memoir.

When asked if she would consider running for governor, mayor or any elected office again, Clinton told News 12, "I don't think so," adding that she loves living in New York and is grateful for the time she spent as senator of the state.

The former secretary of state said, "What's at stake in our country, the kinds of things that are happening right now are deeply troubling to me." She said the country has become "not just polarized, we've gotten into really opposing camps unlike anything I've ever seen in my adult life."

"I'm thrilled by the exciting, dynamic women who were elected to Congress, and they're already making their mark," Clinton said.

"I've had a lot of them tell me that ... my work, my, my run for president was very influential in their decision to run," she said.

Clinton said that "we've made a lot of progress" but "we still have a long way to go on women's rights, on gay rights, on making sure that every person has the same chance to have their dignity and their identity respected."