Hillary Clinton on Meghan and Harry's interview: Young women 'should not be forced into a mold that is no longer relevant' 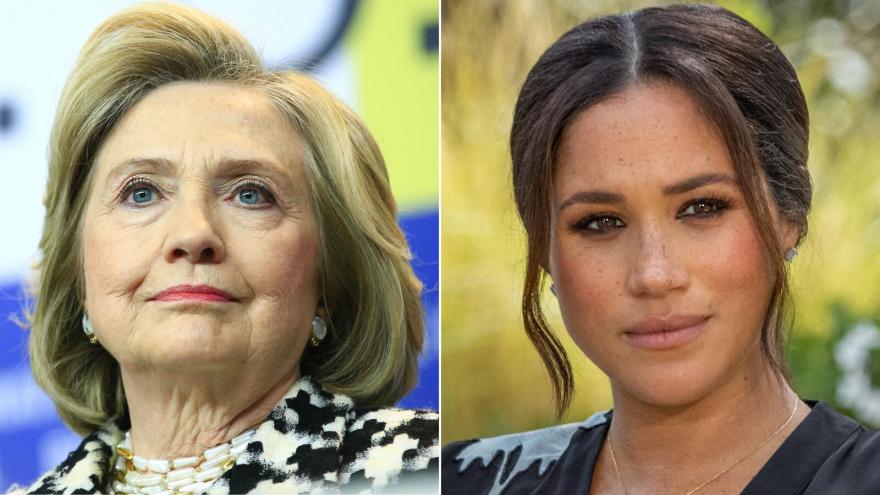 (CNN) -- Hillary Clinton weighed in Monday on Oprah Winfrey's explosive interview with Meghan, Duchess of Sussex, and her husband, Prince Harry, offering support for Meghan and decrying the tabloids and bureaucracy that often targeted her.

"I found it so heart-rending to watch," Clinton said during a Washington Post Live event on Monday, noting that she had met the pair as well as Harry's late mother, Princess Diana. Clinton called it "heartbreaking" that Meghan was not "fully embraced" not just by "the permanent bureaucracy that surrounds the royal family, but by the media in the UK."

Clinton, a woman who has been in positions of power as a former first lady, senator, secretary of state and Democratic presidential candidate, has at times faced heavy public scrutiny and pushed back on press she found unfair. British tabloid reporting on disgraced former US congressman Anthony Weiner, the husband of longtime Clinton aide Huma Abedin, became a significant obstacle for Clinton's 2016 presidential campaign.

She noted that she's experienced the intensity of Britain's notoriously vitriolic tabloids first-hand, calling Meghan "incredibly accomplished" and lauding the Duchess of Sussex efforts to advocate for herself.

"You know I've had my time in the box with the British tabloids, as anybody who is in the public eye has had. And their cruelty in going after Meghan was just outrageous and the fact she did not get more support, that the reaction was, 'Let's just paper it over and pretend that it didn't happen or it will go away, just keep your head down,'" Clinton said. "Well, you know, this young woman was not about to keep her head down. You know, this is 2021 and she wanted to live her life, she wanted to be fully engaged and she had every right to hope for that."

Meghan and Harry pulled back the curtain on life in the British royal family in their interview with Winfrey that aired Sunday, describing a toxic blend of press intrusion, bitterness on social media and isolation from a support structure.

Meghan revealed that she found life as a royal so difficult that she had suicidal thoughts, said there were "concerns" in the family about baby Archie's skin color and shared that the couple's experience was exacerbated by often racist and "outdated, colonial undertones" that repeatedly appeared in coverage of them.

The interview was followed by a deluge of stories on the Daily Mail homepage, despite a dismissive pre-interview banner headline earlier on Sunday, in which the outlet attempted to lambast the CBS special as "a sideshow."

Clinton said that "every institution has got to make more space and acceptance for young people coming up -- particularly young women, who should not be forced into a mold that is no longer relevant, not only for them, but for our society."

"And it was heartbreaking to see the two of them sitting there having to describe how difficult it was to be accepted, to be integrated, not just into the royal family as they described, but more painfully into the larger societies whose narrative is driven by tabloids that are living in the past."

She added, "I just hope that there will be some serious thoughtful consideration in all of the institutions, not just in response to what Meghan and Harry were talking about, but literally across all of our societies."

Clinton also cited diversity as key to bringing such establishments into the future.

"Why do we make it so hard to incorporate diversity, to celebrate it, to be proud of it," Clinton said, adding that the couple was "not only standing up for themselves and for their children, but they're really trying to send a message about what institutions, including the one that they were part of, need to do to be more dynamic and forward looking than they currently are."