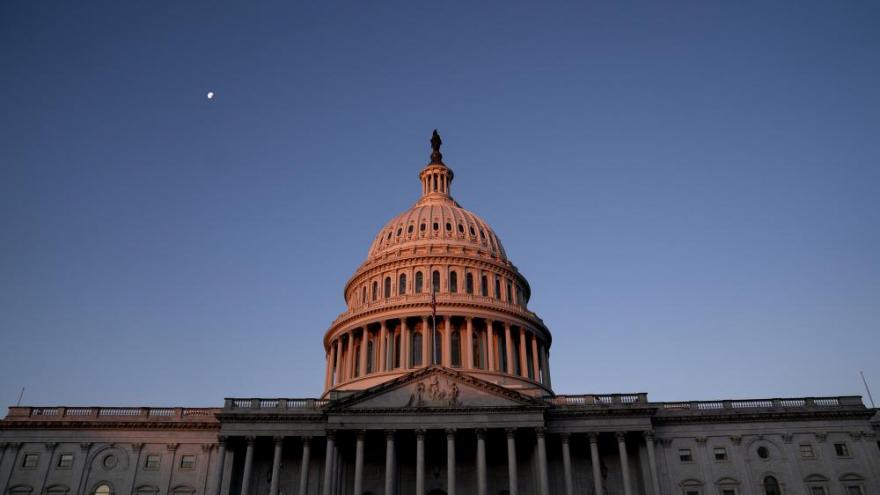 Congressional Republicans are preparing a futile attempt on President Donald Trump's behalf to overturn the results of the November election by objecting to Electoral College votes cast by at least three states for President-elect Joe Biden. Seen here, the Capitol at dawn in Washington D.C., on January 4, 2021.

(CNN) -- Congress has formally affirmed President-elect Joe Biden's 2020 victory, completing a final step in the electoral process after a mob incited by President Donald Trump breached the US Capitol on Wednesday and forced lawmakers to evacuate both the House and Senate chambers.

Vice President Mike Pence, who presided over the count conducted by a joint session of Congress, announced that Biden had won the Electoral College vote early Thursday after the House and Senate easily defeated Republican objections lodged against the votes sent by two states, Arizona and Pennsylvania.

The late-night session was anything but the normal routine for counting Electoral College votes, after the proceedings were halted for more than five hours while lawmakers were forced into lockdown by pro-Trump rioters that overran US Capitol Police.

But lawmakers vowed to finish what they had started, and the Senate reconvened just after 8 p.m. ET Wednesday, nearly six hours after it abruptly recessed.

"To those who wreaked havoc in our Capitol today, you did not win," Pence said as the Senate session resumed following the evacuations of the complex. "As we reconvene in this chamber, the world will again witness the resilience and strength of our democracy, even in the wake of unprecedented violence and vandalism in this Capitol."

Majority Leader Mitch McConnell, who has pushed back against Trump's effort to use the joint session to overturn the election results, said that Congress has "faced down much greater threats than the unhinged crowd we saw today."

"They tried to disrupt our democracy. They failed," the Kentucky Republican

As they reconvened, Democrats and some Republicans condemned Trump's rhetoric in the lead-up to Wednesday's session, saying he deserved some of the blame for inciting the pro-Trump rioters who stormed into the Capitol.

"This mob was a good part President Trump's doing, incited by his words, his lies," Senate Minority Leader Chuck Schumer said. "Today's events almost certainly would not have happened without him."

The Senate voted 93 to 6 to dismiss the objection raised by Republicans to Arizona's results, and 92 to 7 to reject the objection to Pennsylvania.

In the House, a majority of Republicans voted to object to the results, but they were still soundly rejected, 303 to 121 for Arizona and 282 to 138 for Pennsylvania, with all Democrats in opposition. Minority Leader Kevin McCarthy was among the House Republicans to vote to reject the two states' results.

The riots prompted several Senate Republicans who had planned to object to decide they would no longer do so.

"I think today changed things drastically," said Sen. Mike Braun, an Indiana Republican who was one of the objectors. "Whatever point you made before that should suffice. (Let's) get this ugly day behind us."

Sen. Kelly Loeffler, the Georgia Republican who lost her Senate race on Tuesday, said she had prepared to object to her home state's presidential election results, but took a different course after the riots.

"The violence, the lawlessness and siege of the halls of Congress are abhorrent and stand as a direct attack on what my objection was intended to protect, the sanctity of the American democratic process," Loeffler said.

Another two Republicans who planned to object, Sens. Steve Daines of Montana and James Lankford of Oklahoma, released a joint statement saying they were dropping their objections. "We now need the entire Congress to come together and vote to certify the election results," the senators said.

Not all Republicans dropped their objections. Sen. Ted Cruz of Texas stood by his Arizona objection that preceded the rioting, while Missouri Republican Sen. Josh Hawley, who was the first Republican senator to announce plans to object, condemned the violence but argued that the Senate floor was the proper venue to debate the allegations surrounding the election.

He joined an objection put forward by GOP Rep. Scott Perry of Pennsylvania, forcing the chambers to split for a second round of debate and votes.

Other Republicans who voted to object to the Arizona results included Sens. Cindy Hyde-Smith of Mississippi, Roger Marshall of Kansas, John Kennedy of Louisiana, Tommy Tuberville of Alabama and Cruz. Sens. Rick Scott of Florida and Cynthia Lummis of Wyoming voted to object to Pennsylvania, while Kennedy voted to certify in that state.

Republicans and Democrats alike condemned the protesters for breaching the US Capitol, and several blamed Trump -- who pushed for Republicans and Pence to use the joint session of Congress to overturn the election result -- for the dangerous situation that unfolded.

"We gather due to a selfish man's injured pride and the outrage of supporters who he deliberately misinformed for the past two months and stirred to action this very morning," said Sen. Mitt Romney, the Utah Republican and 2012 GOP presidential nominee.

"What happened today was an insurrection incited by the president of the United States," Romney added, warning those who voted to back Trump's objections would "forever be seen as being complicit in an unprecedented attack against our democracy."

Speaking in Delaware, Biden called on Trump to demand an "end to this siege."

"Our democracy is under unprecedented assault, unlike anything we've seen in modern times, an assault in a citadel of liberty: The Capitol itself," he said.

Trump subsequently urged protesters in a video to "go home" while repeating his unfounded claims about a stolen election.

Before the chaos, McConnell rebuked Trump

The chaos broke out after McConnell on Wednesday delivered a forceful rebuke of Trump's baseless claims of widespread election fraud, warning his fellow Republicans of the damage their efforts to try to overturn the election won by Biden could do to democracy.

"The Constitution gives us here in Congress a limited role. We cannot simply declare ourselves the national board of elections on steroids," McConnell said on the Senate floor. "The voters, the courts and the states have all spoken. They've all spoken. If we overrule them, it would damage our Republic forever."

McConnell had opened ahead of a push from his fellow Republicans that was destined to fail, with Democrats and a significant number of Republicans intending to vote down all of the objections.

Sen. Rand Paul, the Kentucky Republican, argued that voting to "overturn state-certified elections would be the opposite of what states' rights Republicans have always advocated for."

While there is no evidence of widespread voter fraud, Trump and his campaign have been pushing baseless and false conspiracy theories that the election was rigged against him. The President and his allies lost dozens of lawsuits across the country both claiming fraud and challenging the constitutionality of state election laws altered due to the Covid-19 pandemic.

All eyes on Pence

As his losses mounted since November 3, Trump has gone after the courts that ruled against him, state election officials and lawmakers who haven't embraced his conspiracy theories or tried to overturn the will of the voters, Senate Republicans who oppose his anti-democratic push to overturn the Electoral College result and even Pence, who presided over Wednesday's joint session of Congress before he was evacuated.

Trump addressed his supporters who converged on Washington near the White House Wednesday morning, continuing to pressure Pence to go beyond his authority while encouraging his supporters to march on the Capitol ahead of the riots.

But Pence wrote in a letter to lawmakers Wednesday that he did not have the "unilateral authority" to intervene.

"Our Founders were deeply skeptical of concentrations of power and created a Republic based on separation of powers and checks and balances under the Constitution of the United States," Pence wrote. "Vesting the Vice President with unilateral authority to decide presidential contests would be entirely antithetical to that design."

Congress' counting of the electoral votes is typically little more than an afterthought. Just twice since the process was established in the 19th century have votes been forced on Electoral College results, and several other would-be challenges have quickly fizzled because no senator joined them.

Joint session in the shadow of Georgia's runoff

Wednesday's events played out as Democrats swept the Georgia Senate races, taking control of a 50-50 Senate after Biden is sworn in and Vice President-elect Kamala Harris becomes the Senate's tie-breaking vote.

The question of how to handle the count had created a major divide inside the Republican Party. The Senate Republican fight spilled into the open last week following Hawley's announcement, with Trump attacking McConnell and other Republicans who hadn't joined.

In the House, No. 3 Republican Cheney -- daughter of former Vice President Dick Cheney -- forcefully pushed back on the objections, while McCarthy quietly backed them.

The last time a lawmaker forced votes on the Electoral College results was in 2005, when Sen. Barbara Boxer, a California Democrat, objected to President George W. Bush's win in Ohio, which she said was never an effort to overturn the election result. In 2017, a group of House Democrats raised several objections to states Trump won, but they were gaveled down because they didn't have a senator join -- by then-vice president Biden.