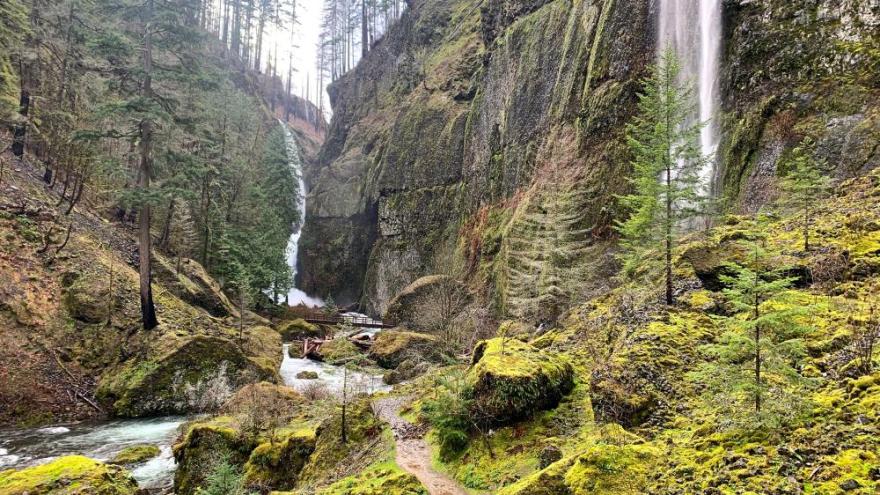 The hiker was on Multnomah Falls-Larch Mountain Trail when she fell. Wahclella Falls Trail, another trail in the gorge, is pictured.

(CNN) -- A woman hiking with a group of friends in the Columbia River Gorge outside Portland, Oregon, died on Friday after falling approximately 100 feet and suffering a head injury, say officials.

Deputies from the Multnomah County Sheriff's Office and firefighters from the Corbett Fire District responded to a report of the fall around 1:15 p.m., according to a news release from the sheriff's office. While en route, they received an update that the woman's injuries were life-threatening and that bystanders had started CPR, the release said.

The hiker was pronounced dead when firefighters reached her, according to the release. Multnomah County Search & Rescue then helped the medical examiner's office recover the woman's body. They said she will be identified once next of kin have been notified.

Staff from the Trauma Intervention Program Northwest were dispatched to provide emotional support and mental health resources to those impacted by the hiker's death, the release said.

The woman was hiking on Multnomah Falls-Larch Mountain Trail, according to the release. She was found around 1.3 miles from the trailhead.

The Columbia River Gorge is a popular tourist destination in the Pacific Northwest, stretching 80 miles long and up to 4,000 feet deep, according to the US Forest Service. Multnomah Falls, a waterfall within the gorge area, is the most visited natural recreation site in the Pacific Northwest and receives over 2 million visitors each year, says the service.

Stephanie Weinstein, a tourist visiting Multnomah Falls from Canada with her family, heard about the fatal fall just before she set out to hike the same trail, according to CNN affiliate KPTV

"It's terribly devastating," said Weinstein, according to KPTV.

"It hit us hard to know that happened here," Weinstein said to KPTV. "My teenage son really likes to go to the edge of trails, horrible things could happen.

"I'm sending all my prayers and my thoughts to them."