Highland Park shooter's rooftop position made it hard for police to find him quickly as parade turned into chaos, chief says 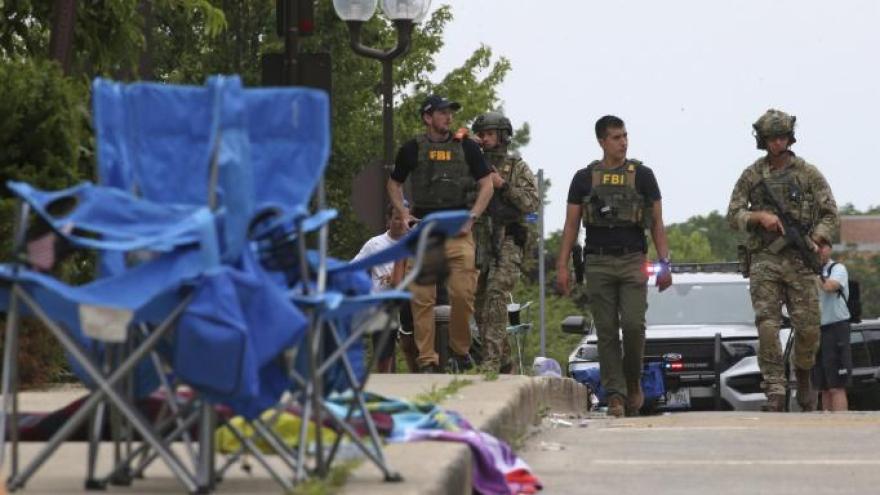 Law enforcement officers investigate after the shooting at Highland Park, Illinois, on July 4.

(CNN) -- The Fourth of July parade shooter's location -- concealed on a rooftop along Highland Park's Central Avenue -- made it hard for law enforcement to figure out immediately where bullets were raining from when he opened fire with a semi-automatic rifle, the Illinois city's police chief said Thursday.

"The noise was bouncing off the buildings. People were pointing in different directions," Chief Lou Jogmen told CNN of the scene of fear and chaos that left seven people dead and dozens more wounded in yet another mass shooting in America.

In the panicked aftermath, authorities spent nearly eight hours hunting for the shooter, fearing he would resume his killing spree, Jogmen said as he offered fresh details of the carnage and what followed.

"Was it a pause, was it a break?" Jogmen said, referring to questions authorities faced during the frantic search. "Is this person intent on continuing until he ended his life? Is this a person that was looking for an escape?"

Robert E. Crimo III was taken into custody by police at a traffic stop the same day after being tipped off by what they described as "an alert member of the community." He was charged with seven counts of first-degree murder, and more charges are expected, prosecutors have said. He's being held without bond.

In a voluntary statement, Crimo admitted to authorities he emptied two 30-round magazines before loading his weapon with a third and firing again, Lake County Assistant State's Attorney Ben Dillon said Wednesday during a virtual bail hearing. If convicted, Crimo faces a life sentence in prison.

While authorities say Crimo acted alone, Lake County State's Attorney Eric Rinehart has declined to comment on whether anyone connected could face charges.

There's no criminal liability for sponsoring someone's application for an identification card which Illinois requires to buy a weapon in the state -- a sponsorship authorities say Crimo's father provided for his son's application because the son was under 21 -- Rinehart said Thursday, adding his office still is trying to determine "who knew what when."

The motive in the shooting remains unclear four days later.

"That's the first thing people want to know," Jogmen said. "At this point, I don't think I can give you a why based on what I'm hearing from my investigators. ... We'd love to have that reason out there, so people could process (it), but I'm not sure that we're there yet."

As investigators work to determine what led up to the shooting, the Highland community continues to grieve those slain and hurt in the attack.

Among the wounded is an 8-year-old boy, who is paralyzed from the waist down after getting shot in the chest.

Cooper Roberts attended the parade with his mother, Keely, and his twin brother, Luke, who were also wounded in the shooting, family spokesperson Anthony Loizzi said Thursday during a news conference.

"It's going to be a new normal for him moving forward," Loizzi said. "It sounds (like) he'll have significant issues moving forward, especially with walking."

In a Friday update, Loizzi said the child was conscious for the first time since the attack and asking for his twin brother and dog. He was later sedated again because of the pain, the spokesperson said.

Meanwhile, a married couple who were injured during the shooting reunited at the hospital after the wife got out of surgery, said Samantha Whitehead, a friend close to the family.

Stephen Kolpack was shot in the leg and released, while his wife Zoe suffered a shattered femur, Whitehead said.

Whitehead, who described herself as Zoe's best friend, has set up a GoFundMe to cover the family's medical expenses.

Those who didn't survive include Irina and Kevin McCarthy, ages 35 and 37 respectively, who were parents to a 2-year-old boy found alive at the shooting scene.

The suspect had run-ins with police

In April 2019, Highland Park police got a call that Crimo had tried to take his own life using a machete, and mental health professionals handled the issue, a police report documenting the incident states.

A few months later, a relative reported in September 2019 that Crimo threatened family members that he would "kill everyone" and had a collection of bladed items in his closet, another police report shows. Police confiscated the collection, and the suspect's father -- Bobby Crimo Jr. -- picked it up later that day at the police station.

Following the second report, Highland Park police submitted to the Illinois State Police a "Clear and Present Danger" report about what happened, the police report shows.

No arrests were made during the incident because there were no signed complaints against Crimo. Family members were not willing to file additional complaints, the state police said.

Crimo's application for a firearm owner's identification card, or FOID, was sponsored by his father because his son was under 21. It was not denied because there was "insufficient basis to establish a clear and present danger" at the time, state police said.

There is no criminal liability for sponsoring someone's FOID, Rinehart, the county state's attorney, told CNN on Thursday, adding the office is still going through evidence "in terms of who knew what when."

"There's different ways to look at potential criminal liability in this case," Rinehart said. "There's not a, per se, violation of law if you vouch for somebody in a FOID card, and they end up doing something terrible like this. But, having said that, we are continuing to investigate the case and continuing to explore all options."

CNN's calls to Crimo Jr. have not been returned. His attorney, Steve Greenberg, told CNN they would not be making any further public comments, "but the parents will continue to speak with law enforcement and to assist them."

Uncle says attack was out of suspect's character

The gunman's uncle, Paul A. Crimo, has said his nephew has lived "off and on" for the past couple years in an apartment behind his own home in Highwood, Illinois. Paul Crimo said he shares the home with his brother -- the suspect's father.

The shooting, Paul Crimo told CNN on Friday, is "out of his character" for his nephew. However, he said he didn't interact with his nephew much, and they had a "very distant relationship."

Paul Crimo said he knew nothing about his nephew's interactions with law enforcement in 2019 until he heard about them in news reports after this week's shooting. He also didn't know his nephew owned guns, he said.

"My nephew is a real lonely guy, quiet. He keeps everything to himself," Paul Crimo told CNN's John Berman on "New Day" Friday.