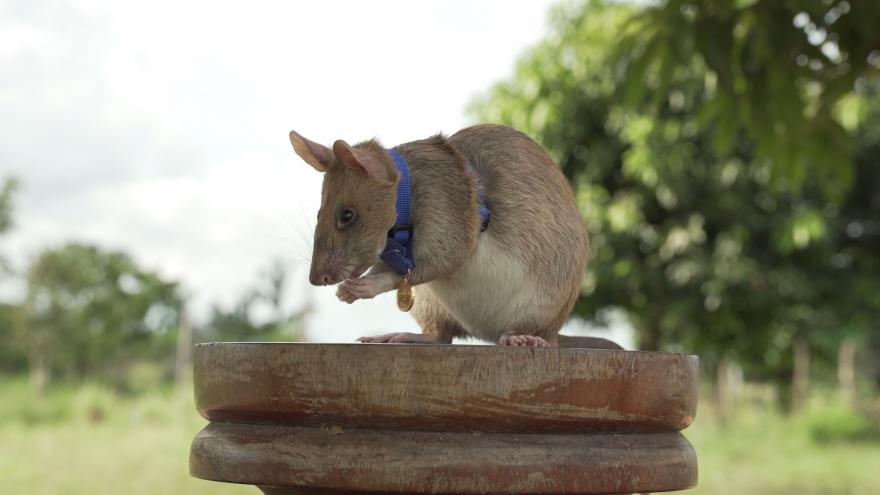 (CNN) -- Magawa the "hero rat," whose work sniffing out landmines in Cambodia won him a medal for life-saving bravery, is retiring after a distinguished five-year career.

The African giant pouched rat has found 71 landmines and 38 items of unexploded ordnance during his service, according to APOPO, the mine-clearing non-governmental organization that trained him.

His work saw him win a gold medal from the British veterinary charity the People's Dispensary for Sick Animals (PDSA) last year.

But APOPO said the revered rodent, who turns seven later this year, has "worked hard and deserves to relax now."

"Although still in good health, he has reached a retirement age and is clearly starting to slow down," APOPO said. "It is time."

His work has helped the organization clear more than 225,000 square meters of land in Cambodia, where decades of conflict have left the landscape strewn with dangerous unexploded devices.

Magawa is larger than the average pet rat, but still light enough to never set off a landmine by walking over it, the way human de-miners might. That advantage led APOPO to train him and other rats to detect the scent of the explosive chemicals used in landmines and point them out to their handlers.

The group praised Magawa for "allowing local communities to live, work, play and be educated; without fear of losing life or limb."

African giant pouched rats are intelligent and easy to train; Magawa began training from a young age, and "passed all his tests with flying colors" before being deployed to Cambodia, the PDSA said when awarding him their medal.

He has been trained to ignore scrap metal lying about, and signals to his handler when he detects a landmine's exact location. He's so fast at finding landmines that he can clear an area the size of a tennis court in 30 minutes -- something that might take a human four days using a metal detector, the PDSA said.

The United States dropped unexploded ordnance across Cambodia, Vietnam, and Laos during the Vietnam War. Then, after the fall of the Khmer Rouge, the ensuing civil war and Vietnamese invasion saw more landmines laid across the Southeast Asian nation.

APOPO said it cleared 4.3 million square meters of land last year in Cambodia alone, which "would not have been possible without the help of little heroes like Magawa." The organization operates in 59 countries.