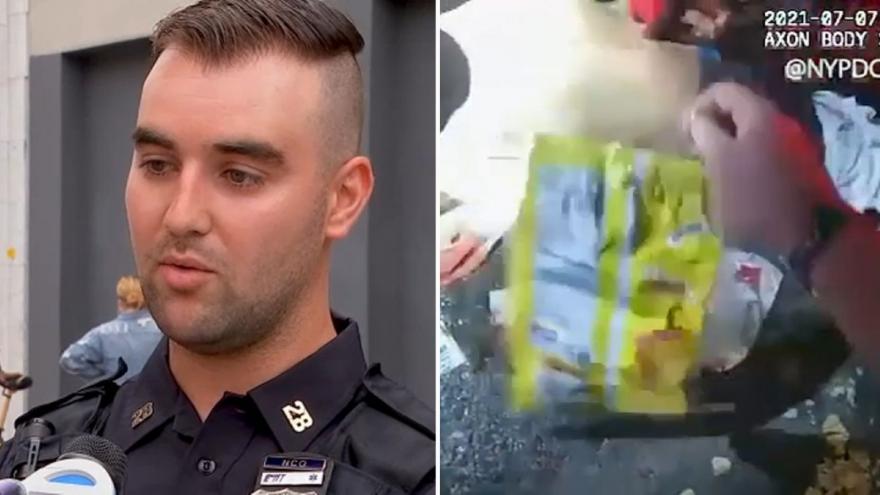 NEW YORK, New York (WABC) -- An NYPD officer is being hailed as a hero for using a bag of chips and duct tape to save a stabbing victim who was bleeding profusely.

The incident happened at the corner of 125th Street and Malcom X Boulevard in Harlem back on July 7.

"We knew right away we needed to seal the chest," Kennedy said. "With a puncture wound there, we didn't want the air going in and collapsing his lung."

Body camera footage shows Officer Ronald Kennedy yelling for someone to get him a potato chip bag before asking two people to help him lay the victim down on his back.

"He told me, 'Go in the store, get me a bag of chips," bystander Ricardo Gonzalez said.

Kennedy then told Officer David Galindez to cut the tape.

"I trusted Ron knew," Galindez said. "He had prior EMT experience. I knew it was going to work."

Kennedy then used the tape to secure the bag over the wound.

"The effect was immediate and apparent," NYPD Officer Matthew Grieve said. "As soon as Ron finished basically getting that dressing on there, that bag of chips, right away we noticed it, a drastic improvement in his condition."

It stopped the bleeding enough to keep the victim alive until an ambulance arrived, and paramedics quickly switched out that seal.

The victim was rushed to Harlem Hospital and is still recovering, with doctors later saying that Kennedy's quick thinking likely saved the victim's life.

"It worked out really well," Kennedy said. "We made the right calls at the right time, and we're really happy with how it worked out."

About an hour after the incident, Officer Galindez caught the suspect around the corner and retrieved the knife used in the stabbing.