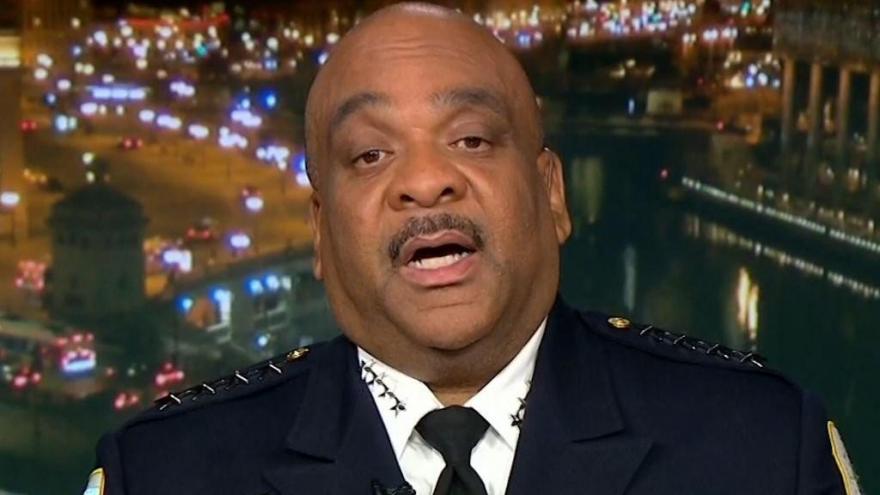 Nearly three years later, the chief can tout some impressive crime drops. Last month had the lowest number of homicides in a January in nine years. And in 2018, overall crime in the city was down 10% since 2016.

(CNN) -- When Eddie Johnson landed the top spot as Chicago's police superintendent, his to-do list was a long, tough one.

Nearly three years later, the chief can tout some impressive crime drops. Last month had the lowest number of homicides in a January in nine years. And in 2018, overall crime in the city was down 10% since 2016.

It's a lot of progress, Johnson told CNN's Don Lemon Monday night. And he doesn't want the Jussie Smollett case to overshadow those strides of improvement.

Smollett told authorities he was attacked early January 29 by two men who were "yelling out racial and homophobic slurs" and "poured an unknown chemical substance" on him, according to police. He also said one of the attackers put a rope around his neck, which a police spokesman said was shaped like a noose.

The "Empire" actor said one of the attackers said, "This MAGA country, n****r," during the incident, police said.

But as the police investigation unfolded, Smollett went from hate crime victim to primary suspect.

And the Smollett case, Johnson said, could cause problems for a city that's otherwise progressing.

'We don't want to lose that momentum'

Johnson said Monday he made a "pact" with the city's mayor when he began leading the department that "we would do everything we could to make Chicago safer."

"We've made a lot of progress in the past three years," he said. "Crime is down, we have built up and repaired relationships in the black communities, the black and brown communities. So we don't want to lose that momentum."

And he said he doesn't want "manufactured things" -- like the "bogus police report" he says Smollett filed -- to "stunt that growth."

"The numbers are going the right way, the right direction," he said. "That's a good thing."

"I don't want anything to disrupt that (progress) unless it's earned," he said. "I just don't understand the nature of something like this because it could really cause an issue in this city."

The chief stood firm in saying that the evidence police uncovered later in the investigation did not corroborate Smollett's initial description of the attack.

"Our job is to let the facts guide us to where we go," Johnson said, adding that the actor initially said he saw through the attackers' masks and reported they were "white-skinned people."

"But the facts guided us in a different direction," Johnson said. "I would tell you this also -- we classified him as a victim. We gave him the benefit of the doubt all the way up to the 47th hour of the 48th hour that we could hold those two brothers in custody."

Police say Smollett paid two brothers $3,500 to stage an attack on him. He faces a felony charge of disorderly conduct for falsely claiming he was attacked, police say. Johnson has said Smollett took "advantage of the pain and anger of racism to promote his career."

Smollett has maintained he was truthful about the incident.

A statement on behalf of the actor called his bail hearing an "organized law enforcement spectacle that has no place in the American legal system."

"Mr. Smollett is a young man of impeccable character and integrity who fiercely and solemnly maintains his innocence and feels betrayed by a system that apparently wants to skip due process and proceed directly to sentencing," the statement said.

Under Illinois law, filing a false police report is disorderly conduct and punishable by one to three years in prison. Smollett is due back in court March 14.

Authorities said Smollett was dissatisfied with his salary on the show and wanted publicity when he filed the police report.

Executive producers of "Empire" said last week that while they were waiting for the legal process to play out, they would remove Smollett's character from the season's final two episodes.