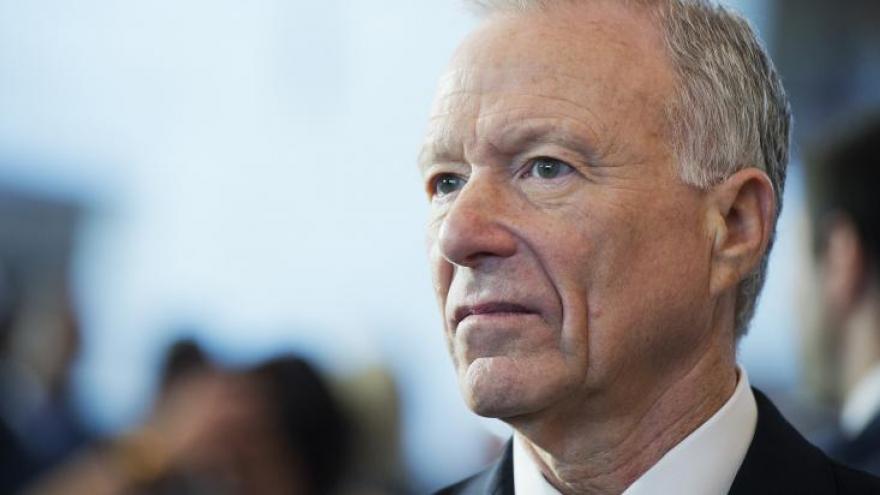 Scooter Libby had been convicted of perjury and obstruction of justice in 2007 in the investigation into who leaked the identity of CIA officer Valerie Plame.

(CNN) -- The end of President Donald Trump's time in office has been marked by a renewed interest in granting clemency -- both from the President, and from members of his inner circle looking for protection before President-elect Joe Biden assumes office.

While Trump has continued to falsely insist publicly that he won the presidential election rather than Biden, the President's pardon of former national security adviser Michael Flynn was a sign Trump understands his time in office is coming to a close. The President announced a wave of pardons in the days before Christmas, kicking off what is expected to be a flurry of pardons and commutations in the coming weeks as he concludes his term.

Trump associates including Rudy Giuliani, who has been leading the President's long-shot legal battles to overturn the results of the 2020 presidential election and disenfranchise millions of voters in his role as Trump's personal attorney, are making appeals to him in the hopes of obtaining pardons before he leaves office, a source familiar with the matter told CNN on Tuesday.

And since the election, Trump has been discussing with advisers preemptively pardoning several people close to him, including his children, son-in-law and Giuliani, a separate source familiar confirmed to CNN.

Trump has often bypassed the DOJ's Office of Pardon Attorney in deciding who gets granted clemency, instead choosing to act on the appeals from celebrities, conservative media or his Republican allies.

Here's a look at some of the high-profile people to whom Trump granted clemency during his time in the White House:

Roger Stone: Trump announced on December 23 that he pardoned his longtime friend Stone, who was convicted of crimes that included lying to Congress in part, prosecutors said, to protect the President. Earlier in the year, the President commuted Stone's prison sentence days before he was set to report to a federal prison in Georgia.

Charles Kushner: Trump announced on December 23 that he pardoned Charles Kushner, the father of the President's son-in-law Jared Kushner. The elder Kushner had served time over a decade ago after pleading guilty to 16 counts of tax evasion, one count of retaliating against a federal witness -- his brother-in-law -- and another count of lying to the Federal Election Commission.

Paul Manafort: Trump pardoned Manafort, his former 2016 campaign manager, on December 23. At the time, Manafort was serving the remainder of his 7.5 year prison sentence from home after being released earlier in the year due to concerns about potentially contracting the coronavirus. Manafort was convicted by a jury of tax and banking crimes in August 2018, then pleaded guilty to conspiracy and obstruction of justice.

Margaret Hunter: Trump pardoned Margaret Hunter, the wife of former GOP Rep. Duncan Hunter of California, on December 23, a day after he pardoned her husband. Margaret Hunter was sentenced in August to eight months of home confinement after pleading guilty to misusing campaign funds.

George Papadopoulos: Trump announced on December 22 that he had granted a pardon to Papadopoulos, a former 2016 campaign aide who pleaded guilty to lying to investigators during the Russia investigation.

Alex van der Zwaan: The Dutch lawyer who was sentenced to 30 days in jail after pleading guilty to lying to Mueller investigators was pardoned by Trump on December 22. Van der Zwaan spent almost a month in prison before being deported to Europe in June 2018.

Duncan Hunter: The former Republican congressman from California was pardoned by Trump on December 22. Hunter was sentenced earlier in the year to 11 months in prison and three years of supervised release related to his misuse of more than $200,000 in campaign funds for personal expenses.

Chris Collins: Trump pardoned Collins, a former Republican congressman from New York, on December 22. Collins pleaded guilty in October 2019 to one count of conspiracy to commit securities fraud and one count of making a false statement, and had been serving his 26-month prison sentence at the time of his pardon.

Two Border Patrol agents: Ignacio Ramos and Jose Compean, two former border patrol agents, were also pardoned by Trump on December 22. The former agents were convicted in 2006 of shooting and wounding an unarmed undocumented immigrant and then covering it up.

Weldon Angelos: Trump pardoned Angelos, who was sentenced to 55 years in prison for selling marijuana and carrying a handgun, on December 22.

Philip Lyman: Trump pardoned Lyman, a county commissioner in Utah who was sentenced to 10 days in jail related to his protest of ATV restrictions on federal land, on December 22.

Otis Gordon: On December 22, Trump pardoned Gordon, who was convicted of possession with intent to distribute.

Steve Stockman: Trump announced on December 22 that he had commuted the remaining prison term of Stockman, a former Republican congressman from Texas who was convicted by a jury in Texas of almost two dozen felonies, including fraud and money laundering.

Philip Esformes: The Florida nursing home mogul convicted of paying bribes in a Medicare fraud case had some of his sentence commuted by Trump on December 22.

Michael Flynn: Trump announced on November 25 that he was granting Flynn, his former national security adviser, a pardon clearing him from anything related to the investigation the FBI conducted into his contacts with Russia; his cooperation during the Mueller investigation and other cases Mueller could have investigated; and his disclosures about secretly lobbying for Turkey in 2016 before becoming Trump's first national security adviser.

Alice Marie Johnson: Trump granted Johnson, a first-time nonviolent drug offender, a pardon on August 28. Trump had commuted her prison sentence in 2018, a week after Kim Kardashian West pleaded the case for Johnson's release during an Oval Office meeting with Trump.

Jon Ponder: A convicted bank robber and founder and CEO of Hope for Prisoners, Inc., Ponder was issued a full pardon by Trump on August 25. A video of Trump pardoning Ponder ran during the second night of the Republican National Convention.

Susan B. Anthony: During an August 18 event, Trump commemorated the 100th anniversary of the 19th Amendment, the women's right to vote, by pardoning the women's rights activist. Anthony was tried and found guilty of voting in the 1872 presidential election before women had the right to vote.

Roger Stone: On July 10, Trump commuted the prison sentence of Stone just days before Stone was set to report to a federal prison in Georgia.

Paul Pogue: Trump granted clemency on February 18 to Pogue, owner of a construction company and Republican political donor, who was sentenced to three years of probation for underpaying his taxes by approximately 10% over a three year period.

Michael Milken: Trump said on February 18 that he was granting clemency to Milken, the legendary bond king from the 1980s who served several years in prison for violating securities laws and has since become a prominent philanthropist.

David Safavian: Trump pardoned Safavian, a former Republican lobbyist and lawyer, who served as an official in President George W. Bush's administration. Safavian was sentenced to one year in prison in 2009 for obstructing an investigation and making false statements in connection to former lobbyist Jack Abramoff during his time at the General Services Administration.

Ariel Friedler: Trump issued a February 18 pardon to Friedler, a software entrepreneur who pleaded guilty to conspiracy to access a protected computer without authorization and served two months in prison, according to the White House, which noted his clemency was supported by former New Jersey governor and top Trump ally Chris Christie.

Angela Stanton: The President pardoned Stanton, an author, television personality, and motivational speaker, on February 18 for her involvement in a stolen vehicle ring in 2007, for which she served six months of home confinement.

Former Illinois Gov. Rod Blagojevich: On February 18, Trump commuted the sentence of Blagojevich, a former Illinois governor accused of attempting to sell a US senate seat who had served eight years of a 14-year sentence for the pay-for-play charges. Trump had been weighing the move since at least 2018.

Tynice Nichole Hall: Trump commuted Hall's prison sentence after she served almost 14 years for drug-related charges. Hall was convicted on charges to distribute, possess and manufacture crack cocaine, as well as possession of firearms, per the Justice Department. The President later commuted the remainder of Hall's term of supervised release.

Crystal Munoz: Trump commuted Munoz's sentence after she served 12 years in prison for marijuana-related charges. Munoz had previously applied for clemency during the Obama administration. The President later commuted the remainder of Munoz's term of supervised release.

Judith Negron: The President commuted Negron's 35-year prison sentence for her role in a $205 million Medicare fraud scheme. She served eight years of her 35-year sentence. Johnson was also among those advocating for Negron's commutation. The President later commuted the remainder of Negron's term of supervised release.

Michael Chase Behenna: Trump gave Behanna, a former Army first lieutenant deployed to Iraq in 2007, a full pardon for his 2009 conviction of killing an Iraqi detainee during an unauthorized interrogation. Behanna spent five years in prison before he was paroled in 2014.

Mathew Golsteyn: Ignoring advice from the Pentagon, Trump intervened in the case of Army Maj. Golsteyn, who was charged with the 2010 killing of an unarmed Afghan man suspected of being a bombmaker for the Taliban. Golsteyn was scheduled for a court martial in December 2019 when Trump pardoned him on November 15, 2019.

Clint A. Lorance: On November 15, 2019, Trump also pardoned Army 1st Lt. Lorance, who was found guilty in 2013 of second-degree murder for ordering his men to fire at three men on a motorcycle in Afghanistan. Lorance was released from the US Disciplinary Barracks at Fort Leavenworth later that day, having served over six years of his 19-year sentence.

I. Lewis "Scooter" Libby: In April 2018, Trump pardoned former Vice President Dick Cheney's chief of staff, who had been convicted in a case headed up by a special counsel, at a time when Trump himself was wrapped up in a special counsel investigation. Libby had been convicted of perjury and obstruction of justice in 2007 in the investigation into who leaked the identity of CIA officer Valerie Plame. He was not accused of the leak itself.

Jack Johnson: Trump granted a posthumous pardon for the first Black heavyweight boxing champion of the world after "Rocky" actor Sylvester Stallone brought the case to his attention. Johnson was convicted in 1913 under the Mann Act for taking his White girlfriend across state lines for "immoral" purposes. The Mann Act purported to prevent human trafficking for the purpose of prostitution, but critics have argued it was applied inconsistently to criminalize African Americans and those with dissenting political views. He served 10 months in prison.

Dinesh D'Souza: Trump issued a full pardon in late May 2018 to the conservative author and filmmaker after Texas Sen. Ted Cruz, among others, raised the issue with him, a source familiar with how things unfolded told CNN. D'Souza pleaded guilty in 2014 to violating federal campaign finance laws by illegally using straw donors to contribute to a Republican Senate candidate in New York in 2012.

Dwight Hammond Jr. and Steven Hammond: Trump pardoned the father-and-son cattle ranchers who were convicted in 2012 of committing arson on federal lands in Oregon. Their sentence inspired rancher Ammon Bundy in 2016 to lead a weeks-long armed occupation of a federal wildlife refuge in Oregon.

Joe Arpaio: Early into his presidency, Trump granted his first pardon in August 2017 to the controversial former Maricopa County sheriff known for his harsh treatment of undocumented immigrants. Arpaio was a vocal supporter of Trump's 2016 candidacy. A month before his pardon, Arpaio was found guilty of criminal contempt for violating an order barring him from targeting Latinos for traffic stops and detention on the suspicion of their immigration status and had been scheduled for sentencing that October.