Here's who spent big on ads in Super Tuesday states 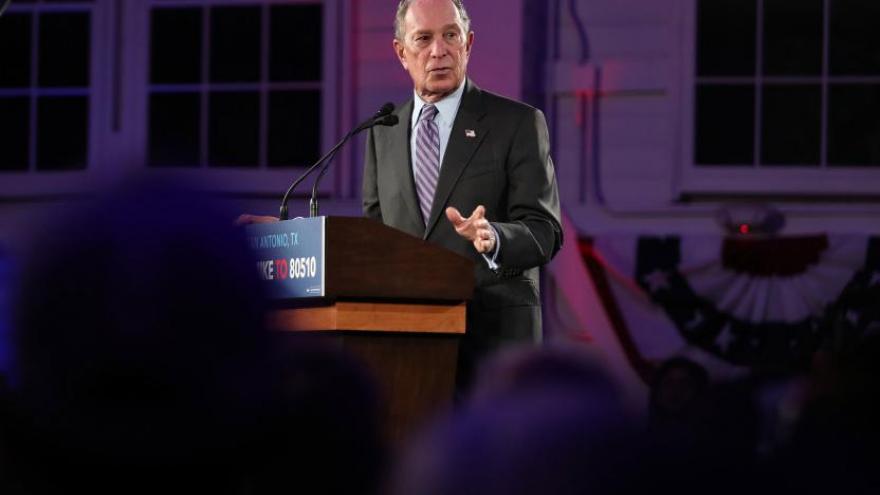 If you live in one of the 14 states voting on Super Tuesday, you've probably seen a lot of commercials for Michael Bloomberg lately. Democratic presidential candidate, former New York City mayor Mike Bloomberg speaks during a campaign rally at Hangar 9 on March 1, 2020, in San Antonio, Texas.

(CNN) -- If you live in one of the 14 states voting on Super Tuesday, you've probably seen a lot of commercials for Michael Bloomberg lately.

That's because the former New York mayor's presidential campaign has poured more than $234 million into TV, radio and digital advertising in the first Super Tuesday states -- more than 10 times that of any of his Democratic rivals.

With so many states holding primaries on Tuesday, spanning the country from Maine to California, where does a less well-funded campaign put their money into media advertising? Do you try to show TV commercials in California and Texas, two of the most expensive media markets in the country? Or make up for lost ground with less expensive digital ads, or states with cheaper ad rates? Is it better to spend a large amount on a few states, or a little in every state?

For example, Pete Buttigieg, before ending his campaign on Sunday, decided to distribute at least $100,000 in ads to as many states as possible (11), even if the ad buys were smaller than his competitors.

Amy Klobuchar, on the other hand, spread most of her $4.7 million over eight states. More than half of that money, $2.51 million, went toward ads in North Carolina and Virginia, while states favoring the more liberal Bernie Sanders in the polls only received a few thousand dollars in digital ads. Klobuchar ended her campaign on Monday, a day before Super Tuesday.

As seen in the chart below, the spending numbers collected by Kantar Media/CMAG -- current as of Tuesday morning -- help illuminate the strategy of the five Democratic candidates left in the race.

Michael Bloomberg not only paid for TV ads in every state -- he leads in spending for every state by wide margins.

Bernie Sanders spent more than $18 million on ads, including $8.3 million in California. What state only received $14,000? His home state of Vermont. Only one candidate still in the race paid for TV and radio ads in Vermont: Bloomberg.

Elizabeth Warren has only spent about $2.4 million on ads, most of it going to Texas, Colorado and Utah. However, with an $11.7 million assist from her super PAC -- Persist PAC -- she was able to cover 13 states with over $100,000 in advertising.

Joe Biden, coming off his win in South Carolina, has only paid for about $2.2 million in ads that mostly focused on six states. All of those states aside from California are in the South, where he enjoys a polling advantage.

Tulsi Gabbard has spent the majority of her $201,821 in just three states, but two of them are big markets: California and Texas.

One question that remains is how much ad spending carries over to the ballot box. Businessman Tom Steyer, who ended his campaign over the weekend, spent a total of $22.5 million on media ads in South Carolina. Not only did Steyer place third there, but he failed to garner enough votes to qualify for delegates.