Here's why the vote count is still going in key states 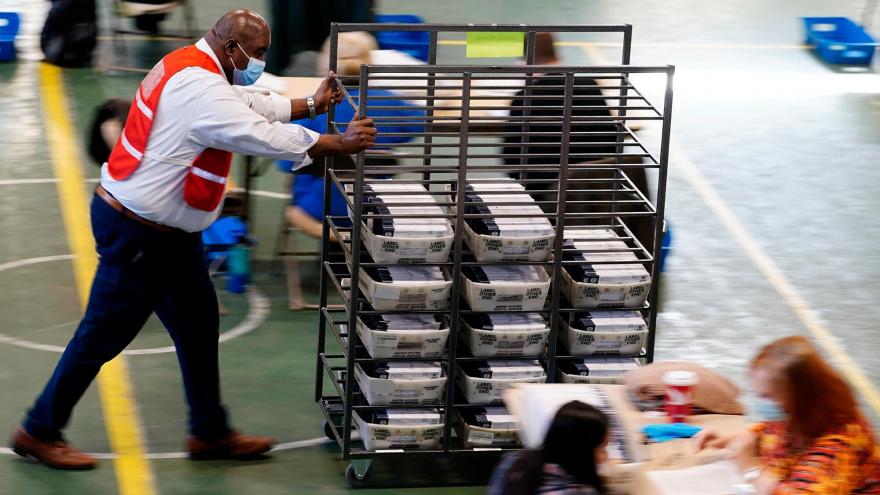 James Lyles, a Chester County election worker, pushes mail-in and absentee ballots for the 2020 general election in the United States to be processed at West Chester University.

(CNN) -- The presidential race between President Donald Trump and former Vice President Joe Biden remains uncalled as election workers across the nation, including in key states, continue to plow through ballots.

Counts were delayed by a record flood of mail-in ballots. Officials in Pennsylvania, a critical battleground state, were prevented from processing those ballots until Election Day, leading to a backlog.

Here's what's happening in each state as of 5 p.m. ET Friday:

Hobbs told CNN's Anderson Cooper that 137,000 of those ballots were in Maricopa County, the state's most populous, and that after the release of more results Friday night that number would go down below 100,000.

"They have been doing about 60,000 to 70,000 at a time," Hobbs said of the Maricopa Elections Department. "They have told us they expect to be counting through the weekend and should have pretty much everything, except for provisional ballots wrapped up this weekend."

Hobbs said there were 25,000 ballots outstanding in Pima County, home to Tucson, and 34,000 in Pinel County, south of Phoenix.

Biden took a narrow lead in Georgia on Friday after Clayton County in Atlanta's suburbs reported, prompting Republican officials to set the stage for a potential recount. Trump's lead dropped steadily as more ballots were counted Thursday, and Biden took the lead on Friday morning.

"Of approximately 5 million votes cast, we'll have a margin of a few thousand," Secretary of State Brad Raffensperger said Friday morning. "With a margin that small, there will be a recount in Georgia."

State official Gabriel Sterling said the state was trying to finish counting on Friday, but warned that counting could slide to the weekend.

Biden's lead doubled to more than 22,000 votes after the latest release of votes from Clark County, the home of Las Vegas.

Six electoral votes hang in the balance in Nevada. Additional uncounted votes from Clark County were expected to be reported later Friday.

On Thursday, the Nevada Secretary of State said about 190,150 ballots statewide remained to be counted, of which 90% are from Clark County, the state's most populous county and a Democratic stronghold.

It's hard to determine how many ballots are outstanding in Nevada because the state is one of a handful that mailed ballots to all active registered voters. Election officials will count mail-in ballots received through November 10, as long as they were postmarked by Election Day.

Trump leads in North Carolina by more than 75,000 votes, with an estimated 95% reported. According to the North Carolina State Board of Elections, nine county election boards were meeting on Friday to consider at least 4,300 additional absentee ballots, which would be added to the unofficial election results.

To finish its count, North Carolina is waiting to see if 116,000 outstanding requested absentee ballots are returned by November 12. In North Carolina, an Election Day-postmarked ballot can be counted if it is received by 5 p.m. ET on November 12.

But the state still does not know how many of those 116,000 voters chose to instead vote in person or to drop off their ballots on Election Day, so the number of potential outstanding votes could shrink.

Biden pulled ahead in Pennsylvania after more ballots from Philadelphia were reported on Friday morning.

Secretary of State Kathy Boockvar, a Democrat, said Friday afternoon that the most mail-in ballots had been counted and the state was beginning to process provisional ballots.

There were approximately 113,000 absentee ballots left to count across the state as of Friday at 5 p.m. ET, according to the state's election website, which is just under 5% of mail-in ballots cast.

There are about 40,000 ballots still to be counted in Philadelphia, according to Philadelphia City Commissioner Lisa Deeley. "It could take several days to complete the reporting of that," Deeley said.

In Allegheny County, which includes Pittsburgh, officials estimate there are about 36,000 ballots left to count. That includes 29,000 ballots that can't be counted until Friday at 5 p.m. ET because of a court order. There are approximately 10-15,000 provisional ballots, according to county officials.