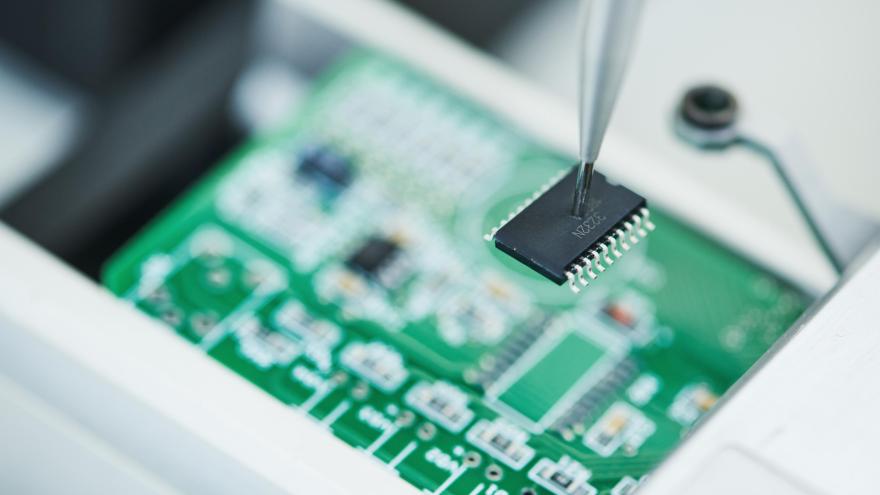 (CNN) -- Congress has passed a bill that will invest more than $200 billion over the next five years to help the US regain a leading position in semiconductor chip manufacturing.

With bipartisan support, the CHIPS and Science Act was passed by lawmakers in late July,and President Joe Bidensigned the bill into law Tuesday.

Once a leader in semiconductor chip manufacturing, the US has lost ground as other countries like China ramped up production, forcing many American manufacturers to import chips -- which are essential to the production of cars, smartphones and medical equipment.

The new funding is intended to help companies bring chip manufacturing back to the US and, as a result, help lower costs and prevent supply chain disruptions. The current global chip shortage has limited production of new vehicles, for example, leaving Americans facing stubbornly high car prices.

Chip maker Intel is already expected to reap some of the benefits of the new funding, specifically to help boost its previously announced investment to build a semiconductor plant in Ohio.

"This new law gives people like me a chance and allows us to grow our businesses," said Joshua Aviv at the bill signing event at the White House on Tuesday. Aviv is the CEO and founder of an electric vehicle charging company called SparkCharge that manufactures its parts at a factory in Buffalo, New York.

"For years, my industry has been at the mercy of the supply chain," Aviv added.

The legislation will spend money on a variety of manufacturing incentives aimed at boosting American chip manufacturing as well as investments in research, development and workforce training.

The spending is not paid for by any offsets and instead will add to the federal deficit.

Here's what is in the spending package, according to summaries by Democratic leadership.

$52.7 billion for chip manufacturing and research

The package will invest $39 billion over five years to expand domestic semiconductor manufacturing. It will provide companies incentives to build, expand and modernize US facilities and equipment.

The legislation will also create a new 25% tax credit for companies that invest in semiconductormanufacturing equipment or the construction of manufacturing facilities.

Private companies that receive financial assistance will be restricted from expanding certain chip manufacturing in China for 10 years.

The law will provide $11 billion over five years to the Department of Commerce to help spur research and development in advanced semiconductor manufacturing, to invest innew technologies and expand workforce training opportunities.

Millions of dollars will target workforce development to make sure workers are available to support more manufacturing.

The legislation calls for a historic investment in scientific research and development that amounts to nearly $170 billion over five years, an $82.5 billion increase in the federal government's baseline authorization.

The majority of that funding will funnel through two government agencies: the National Science Foundation andthe Department of Energy's Office of Science.

The federal funding will also fund the creation of new regional technology hubs across the country, strengthen small manufacturers as well as reduce long-term supply chain vulnerabilities in areas such as advanced manufacturing, next-generation communications, computer hardware and pharmaceuticals.

Universities, community colleges and high schools may be eligible for the money in an effort to strengthen America's workforce so that it can support new chip manufacturing.

"There is a great deal of money focused on providing the needed talent," said Rep. Eddie Bernice Johnson of Texas, chairwoman of the House Committee on Science, Space and Technology.

The legislation also provides new funding for NASA, with the goals of sending astronauts to Mars and the first woman and person of color to the moon.