Here's what you need to know about the NFL Championship games 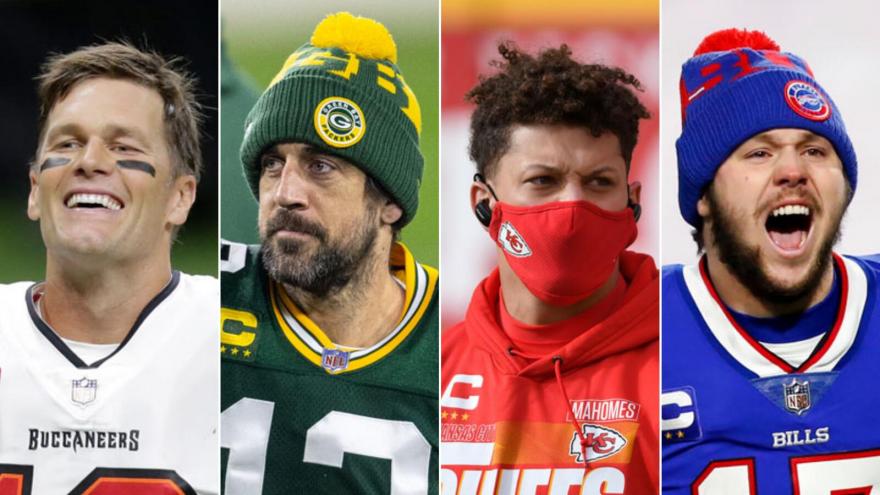 (CNN) -- The NFL championship games this weekend will determine who goes to the Super Bowl, and there's more at stake for some of the teams than a win.

Whether one of your teams is playing on Sunday, both games have historic value, and will be exciting match-ups to watch.

The obvious players to watch in this game will be the veteran quarterbacks, and for good reason.

Green Bay's Aaron Rodgers has a 2020 regular season completion rate over 70% and is first in the league in touchdowns with 48 this season. Rodgers has reached the playoffs 10 seasons and has appeared in 19 playoff games, including winning one Super Bowl.

Tampa Bay's Tom Brady is considered by many as the G.O.A.T of NFL quarterbacks with 43 playoff appearances in 18 years of postseason play, including nine Super Bowls, winning six times. This is his first season with the Bucs, so his leadership is definitely in the spotlight.

Who has the most to prove:

Both teams have a little something that will light the fire underneath them.

For the Bucs, if they win, this will only be the second time ever the team has reached the Super Bowl. With Brady at the helm for the first time, there is a lot riding on their success.

As far as Green Bay is concerned, it's the quarterback face-off that really stands to bring some heat. Can Rodgers outplay Brady?

Chiefs' quarterback Patrick Mahomes has cleared concussion protocol after suffering a hit last week against the Browns, and will be ready to go for the game.

Travis Kelce, the Chiefs' heavily used tight end, is always a go-to for Mahomes. With 11 touchdowns and over 1,400 yards on the season, Kelce is the 6-foot-5 260 pound offensive weapon for Kansas City, and they should look to him in this match-up.

Wide Receiver Tyreek Hill, who has been an asset for the Chiefs all season, will also be a key player to watch. Hill is currently second in the league for touchdowns with 15 overall, and his season total of 1,276 yards is in the top 10. However, Hill has not scored a touchdown in the postseason, so he will be looking to get his first 6.

Bills' quarterback Josh Allen has had an uphill battle as an underdog all season, but he is looking to surpass 350 passing yards in this game. Allen has a 69.2% completion rate and already has three post season touchdowns.

Allen will be looking for wide receiver Stefon Diggs to have his third straight game at over 100 receiving yards and a touchdown. He is first in the league for both total yards and total receptions.

Who has the most to prove:

The Bills are definitely the underdogs heading into the game against the current Super Bowl champions. The Chiefs have been dominating all season, but the Bills are looking to punch their ticket to big game for the first time since 1994. The Bills Mafia, as their fans are called, are ready for a renewed reason to cheer.