What is Astroworld? Who is Travis Scott? And other things to know about the incident 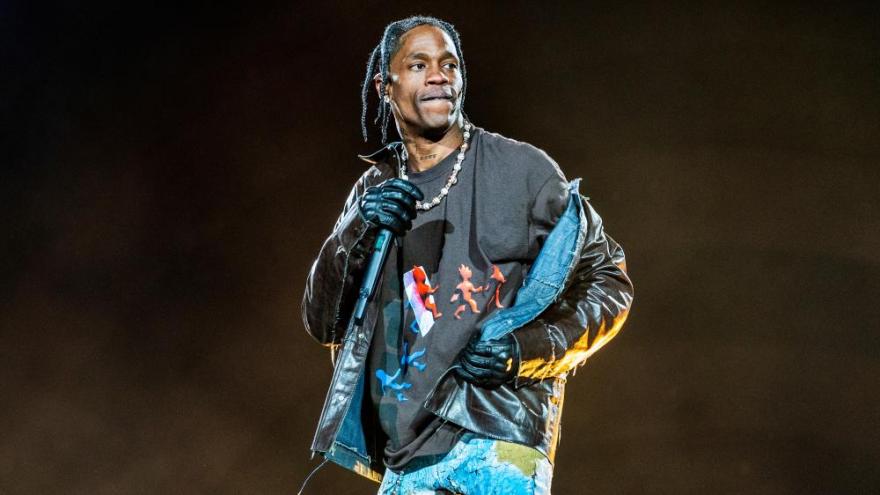 (CNN) -- At least eight people were killed and many others injured after a crowd surged forward while rapper Travis Scott was on stage at the Astroworld Festival in Houston on Friday night.

The incident occurred when the crowd surged toward the stage, crushing those at the front who were unable to escape, local fire chief Sam Peña told CNN Saturday morning. That sparked panic, and the situation worsened and overwhelmed security personnel there, he said.

Astroworld issued a statement on Instagram on Saturday morning that said: "Our hearts are with the Astroworld festival family tonight -- especially those we lost and their loved ones.

"We are focused on supporting local officials however we can. With that in mind the festival will no longer be held on Saturday [..] Thank you to our partners at the Houston Police Department, Fire Department and NRG Park for their response and support."

Here's what you need to know about Astroworld and Travis Scott:

Who is Travis Scott?

Travis Scott is a 30-year-old US rapper, singer and record producer from Houston, Texas. He is best known for his 2018 album "Astroworld" -- which the festival is named after. He is a popular artist and has previously collaborated with other prominent rappers including Drake, Young Thug and others. He shares a child with Kylie Jenner and the couple are expecting again.

Astroworld is a music festival founded by Scott and held in Houston on the former site of Six Flags Astroworld -- this year is its third iteration, as it was canceled last year due to the Covid-19 pandemic. The festival was first launched by Scott in 2018, the same year that the studio album of the same name was released, and the original line-up consisted of performers such as Post Malone, Metro Boomin, Lil Wayne, Scott himself and others.

The 2019 version of the festival came with an expanded lineup, included more genres such as reggaeton and hard rock and was headlined by artists including Gucci Mane, Rosalia, Migos, Pharrell Williams and Megan thee Stallion.

After the cancellation of the 2020 event, Scott collaborated with Epic Games to provide a virtual Astroworld themed event in the video game "Fortnite."

The 2021 iteration of Astroworld was described as including a new creative theme called "Open Your Eyes To A Whole New Universe" which would "bring back the beloved spirit and nostalgia of the legendary and now-defunct amusement park -- AstroWorld -- that Scott visited countless times as a child," according to a press release on the festival from October.

A portion of the proceeds from Astroworld were due to be donated to the festival's official charity partner, Cactus Jack Foundation, which was founded by Scott to "empower and enrich the lives of youth by providing access to education and creative resources to ensure long-term success."

Houston is Scott's home city, and is where Six Flags Astroworld -- an amusement park -- was once located. That closed in 2005 and Scott named his third album after the theme park.

Who was set to perform?

In 2019, there were 50,000 attendees at Astroworld and 100,000 tickets went on sale for the 2021 festival -- the tickets for this year's iteration sold out within 30 minutes of launching. In previous years, the festival was a one-day event, and the 2021 version was supposed to take place on November 5 and November 6.

Have there been problems with Astroworld before?

Three people were trampled and hospitalized in November 2019 as thousands rushed to get into the Astroworld Festival. They were all sent to the hospital with leg injuries, and the event continued as planned.