Here's what we know about the San Jose rail yard shooting 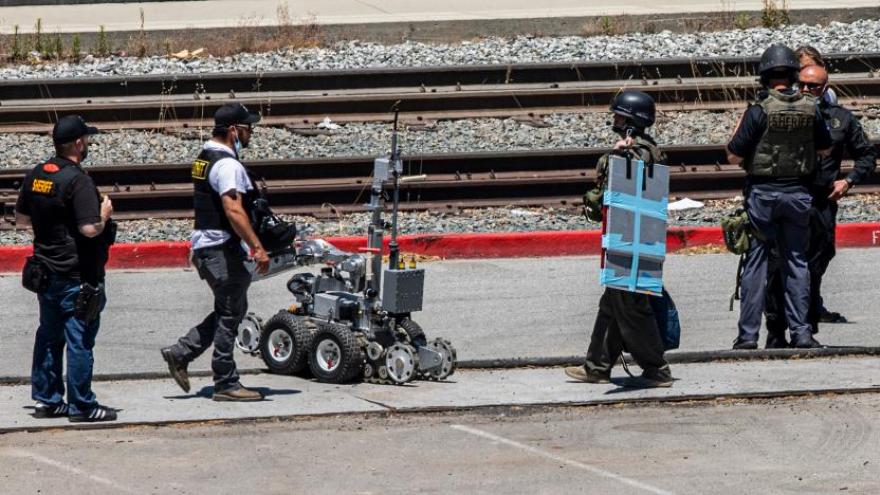 Santa Clara County Sheriff's Department deploys a robot at the parking lot of the VTA Light Rail Facility on May 26, 2021, in San Jose, California.

(CNN) -- Investigators are trying to determine what led a gunman to open fire Wednesday at his workplace -- a public transit rail yard in San Jose, California -- killing nine people before killing himself, officials said.

Eight miles away, authorities are looking into the gunman's home, which officials said was burning around the time of the shooting.

The gunman, VTA employee Sam Cassidy, 57, shot colleagues in two buildings around the time of a morning shift change before taking his own life in front of responding law enforcement officers, authorities have said. He fired 39 rounds, Smith said.

The VTA is a public transit service that operates bus and light rail services in the Santa Clara Valley and employs about 2,000 workers. The rail yard is where the VTA vehicles are maintained and dispatched.

Deputies and other law enforcement officers arrived as the shooting was underway, within two minutes of the calls, as the sheriff's office has a station nearby. They confronted the gunman on a building's third floor within six minutes, Smith told CNN.

The gunman "took his own life in front of the deputies," Smith told CNN. She said she believes the law enforcement officers' quick response saved many lives.

Cassidy appeared to specifically target the people he shot, Smith said Thursday. During the shooting, Cassidy told a local union official -- who does not work for VTA -- that "I'm not going to shoot you," Smith said.

A witness also said the gunman bypassed certain people during the shooting, and so appeared to select those he shot.

"He ... was targeting certain people. He walked by other people," Kirk Bertolet, a worker at the VTA in San Jose, told CNN affiliate KGO. "He let other people live as he gunned down other people."

Bomb-sniffing dogs eventually alerted investigators to the gunman's locker at work. In the locker, investigators found "precursor things for explosives ... ingredients for a device," Smith said Thursday. That included detonation pulls, she said.

Smith didn't know why the items were there or what the gunman might have intended for them, she said.

The gunman resented his workplace

Cassidy had three handguns and 11 magazines were found on his belt, Fair told CNN. Additional magazines, which hold more than 10 rounds and are illegal to possess in California, were also found at the crime scene.

In 2016, when returning from a trip to the Philippines, Cassidy was found with a memo book filled with notes of hatred toward the VTA after US Customs and Border Protection officers searched his bags, a Department of Homeland Security official told CNN. Officers also found books about terrorism and fear and manifestos, the official said.

The Wall Street Journal was the first to report information about the CBP's search of Cassidy.

San Jose officials say the police department was not informed Cassidy had previously been stopped by US Customs officers. In a statement to CNN, San Jose Mayor Sam Liccardo's office said, "Whatever this detention at the border was, it did not result in an arrest that showed up on his FBI criminal history, and it was not reported to SJPD."

Cassidy "has been a highly disgruntled VTA employee for many years," and that "may have contributed to why he targeted VTA employees," the Santa Clara County Sheriff's Office said in a news release Thursday.

Cassidy's ex-wife, Cecilia Nelms, told CNN affiliate the Bay Area News Group he resented his work. Nelms was married to Cassidy for about 10 years until the couple filed for divorce in 2005. She has not been in touch with her ex-husband for about 13 years, according to the outlet.

When the two were married, Cassidy "resented what he saw as unfair work assignments" and "would rant about his job when he got home."

Cassidy also had a strained relationship with an ex-girlfriend, show court documents that revealed troubling allegations she made in a filing in 2009 as she responded to a restraining order he filed against her.

The woman says she dated Cassidy for about one year in what she said became an off-and-on-again relationship after about six months.

The victims were VTA employees

Each person shot by the gunman died, Smith said. They died either at the scene or, in the case of at least two victims, at a hospital, Smith said. Glenn Hendricks, chairman of the VTA, said all were VTA employees.

The Santa Clara County medical examiner's office identified the victims, whose ages ranged from 29 to 63:

• Abdolvahab Alaghmandan, 63, worked with VTA for 20 years as a substation maintainer

• Adrian Balleza, 29, started as a bus operator trainee in 2014 and later a maintenance worker and light rail operator

• Jose Dejesus Hernandez III, 35, started in 2012 as a transit mechanic then became electro-mechanic, then substation maintainer

"It's clear the victims and all the colleagues knew the shooter well," Liccardo, the mayor, told CNN.

Liccardo described the victims as "essential workers" who risked their lives and showed up every day throughout the pandemic.

Some of the victims are related to members of the sheriff's office, Smith said.

It was a planned event, authorities say

More than 22,000 rounds of ammunition, a dozen guns, suspected Molotov cocktails and multiple cans of gasoline were found in Cassidy's home, the sheriff's office said.

"It is clear that this was a planned event and the suspect was prepared to use his firearms to take as many lives as he possibly could had Sheriff's deputies not made entry to stop his rampage," it said.

Authorities also say Cassidy coordinated the destruction of his home with the workplace shooting.

He is believed to have ignited a fire inside his home by placing ammunition inside a pot on the stove, surrounding it with accelerants and then turning on the stove, according to Deputy Cian Jackson of the Santa Clara County Sheriff's Office.

Gunman's home went up in flames

Cassidy's home, which sustained heavy damage in the fire, has been rendered safe and no longer poses a threat to nearby residents, San Jose fire department spokeswoman Erica Ray told CNN.

Minutes after the 911 calls about the shooting began, firefighters were called to a fire at the suspect's home in San Jose, Smith, the sheriff, told CNN on Thursday morning.

No one was found inside, Liccardo told CNN affiliate KGO. The home is about eight miles from the site of the shooting, the mayor said.

Firefighters responded to a fire at the home in the 1100 block of Angmar Court in San Jose at 6:36 a.m. local time, according to tweets from the San Jose fire department.

It took firefighters about an hour to extinguish the flames, which left the structure uninhabitable, the fire department said.

Fair, the FBI agent, told CNN that investigators found intact Molotov cocktails, made with paint thinners and alcohol, and multiple weapons at Cassidy's residence. No explosive materials were found in his locker at work, Fair said.

Surveillance video obtained by CNN shows a man leaving the home of the shooting suspect on Wednesday morning with a duffle bag.

A neighbor, who did not want to be identified, said the video was captured around 5:40 a.m. and showed Cassidy leaving the house in a truck. The neighbor described Cassidy as a "quiet" and "strange" man.

CNN has reached out to the sheriff's office to see if investigators are aware of and have seen this video.