Here's what we know about the Buffalo, Minnesota, shooting suspect 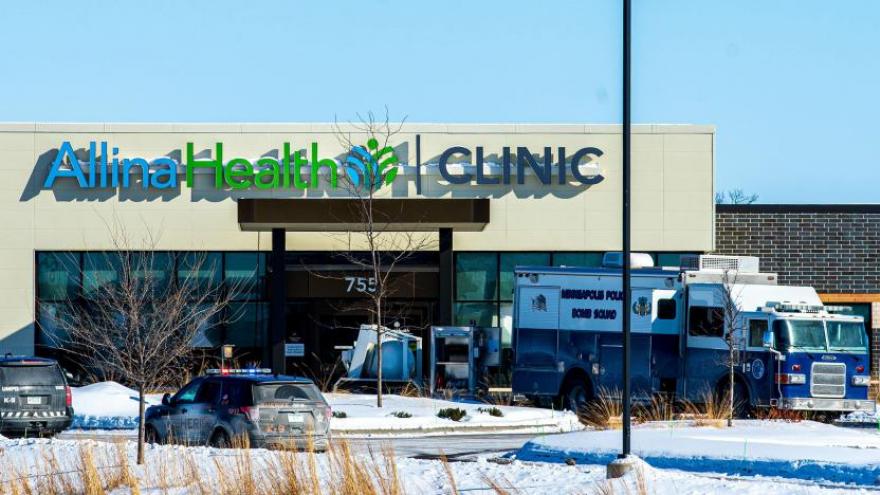 A police Bomb Squad investigates the scene at Allina Health Clinic in Buffalo, Minnesota on February 9, 2021, after a shooting. Authorities have identified a suspect in the shooting.

(CNN) -- Authorities have identified the suspect in the Buffalo, Minnesota, shooting as Gregory Ulrich.

One person is dead and four others were injured after Ulrich, 67, allegedly opened fire Tuesday at the Allina Health Care Clinic.

One person died at Hennepin County Medical Center, according to hospital spokeswoman Christine Hill. Allina Health identified her as Lindsay Overbay, a medical assistant there since November 2018.

One is in critical condition at North Memorial Health Hospital, two are in fair condition and the fourth individual was released on Tuesday.

Officials received word that Ulrich was staying at a nearby motel and, after a search, found "additional suspicious devices" at that location, Wright County Sheriff Sean Deringer said. The motel was evacuated without incident, according to the sheriff.

Ulrich spoke to a doctor at the clinic and talked about "shooting, blowing things up, and practicing different scenarios of how to get revenge" because he was "angry with the medical community," according to a police report from 2018.

He said he "wanted it big and sensational so that it makes an impact," the police report says the doctor told an investigating officer.

When officers went to see Ulrich, he allegedly told them "he was telling the doctor about his dreams and that he would not really do anything."

Ulrich was evaluated at a hospital but wasn't charged in relation to the threatening phone calls, the police record shows.

There was a harassment restraining order against Ulrich but the case was dropped in 2020 after he was found to be mentally incompetent.

Ulrich is "no stranger to law enforcement," Deringer said at a news conference on Tuesday afternoon.

"We have had several calls for service dating to 2003," Deringer said.

"The history we have of with this individual makes it most likely that this incident was targeted at that facility or at someone within that facility," Budke said. "None of the information that we have from our past contact with him would indicate that he was unhappy with or would direct his anger at anyone other than people within the facilities where he had been treated or where they attempted to give treatment."

"It's a history that spans several years, and there's certainly a history of him being unhappy with the health care that he received," Budke said. "There's also, within that history, nothing to indicate that we would've been in the situation that we are at today."

Brother: He had been upset over pain meds

Richard Ulrich said his brother was upset doctors wouldn't prescribe the pain medication he said he needed following back surgery about two years ago.

"(Gregory Ulrich) just kept bringing up the pain medication he needed and how they wouldn't give it to him. He just seemed obsessed with that. It did concern me, but you know, I didn't think he'd do something like this, especially after all this time," Richard Ulrich said.

Gregory told him he had conflicts with nurses, "and they said he was addicted, and he said, 'No, it was just a pain," Richard said.

Gregory Ulrich never referred to any of the nurses or doctors by name, said his brother, who lives in Florida.

Ulrich told motel owner he would be checking out soon

The owner of a motel where Ulrich was staying says that on Monday he told her "by tomorrow my work will be definitely done."

Modna Patel said she had no idea that Ulrich might have been planning something nefarious.

"He came alone, and he was bringing heavy boxes," she said. "He was old, so I was being kind to him. I told housekeepers can you put these boxes in the room."

The housekeepers told her the boxes were heavy so she thought he had beer in them.

Ulrich had financial issues and didn't have a car, she said.

"I said if you take a whole week, I will give you a cheaper rate because you have a shortage of money," Patel said of her conversations with Ulrich.

"He says, 'No, by tomorrow my work will be definitely done. So just give me one (more) night and if it is not done then I can buy more nights,' Patel said.

Ulrich allegedly said he would check out Wednesday.

There is no information that leads officials to believe that there is "any nexus with any type of domestic terrorism" connected with the shooting, Budke said at a Tuesday news conference.

Ulrich is scheduled to appear in court on Thursday morning, and was being held at the Wright County Jail. It was not clear whether he has an attorney.