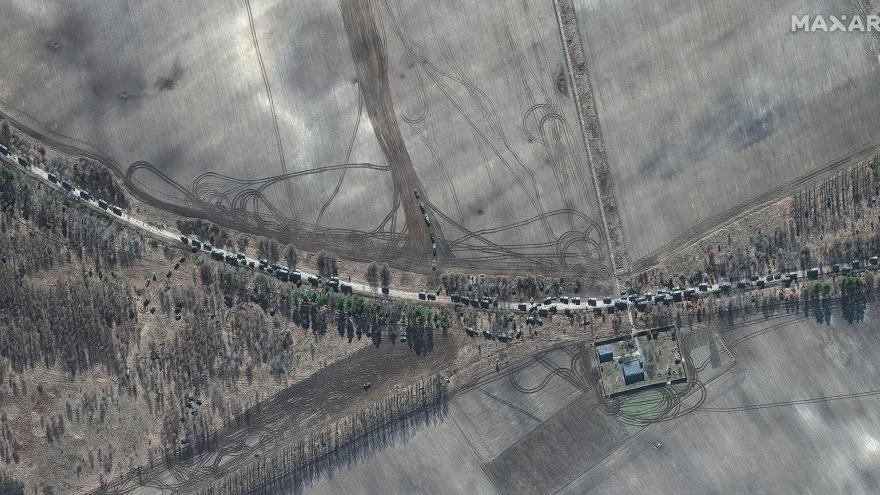 (CNN) -- For days, residents of Kyiv had been bracing themselves for a 40-mile-long convoy of Russian tanks, armored vehicles, and towed artillery to arrive for an assault on the Ukrainian capital.

On Thursday, US intelligence suggested that the convoy was still stalled some distance from Kyiv, backing claims made by both the Ukrainian government and UK's defense ministry.

"We still assess that the convoy that everybody's been focused on is stalled. We have no reason to doubt Ukrainian claims that they have, that they have contributed to it being stalled by attacking it," a senior US official told reporters.

Earlier in the day, the UK's defense ministry said the convoy appears to have stalled some 30 kilometers (19 miles) outside Kyiv and had made "little discernible progress" over the past three days, citing intelligence.

"The main body of the large Russian column advancing on Kyiv remains over 30 km from the center of the city, having been delayed by staunch Ukrainian resistance, mechanical breakdown and congestion. The column has made little discernible progress in over three days," the UK statement said.

Pentagon spokesman John Kirby said Wednesday night that while the convoy and Russia's broader push towards Kyiv "remains stalled," there was a significant concern "that maybe the window is closing to be able to get aid into cities that may become under siege."

A senior US defense official told reporters on that although the convoy is suffering shortages of fuel and food, the US has assessed that the Russians "will again learn from these missteps and these stumbles and will try to overcome them."

First, as the key Russian supply line for any major assault on Kyiv, it is a very large sitting target for Ukrainian forces fighting back against the invasion.

Second, sitting in a 40-mile-long traffic jam for days at a time could take its toll on the morale and discipline of Russian soldiers ahead of a major military operation.

Martti Kari, who previously served as Finland's assistant chief of defense intelligence, told CNN that being stranded like this is bad for morale for two reasons. "First, the Ukrainians have drones and aircraft that could attack the convoy. Second, when you sit around in the same place rumors circulate that affect your mindset. So you become nervous and tired, which is not a good combination."

The convoy is believed to have entered Ukraine via Belarus, a key ally of Putin where Russia had moved huge numbers of troops in recent weeks to carry out what they called joint exercises. When the exercises ended, the troops didn't leave and satellite images actually showed that Russia increased their military presence in the country.

"More and more occupiers are fleeing back to Russia, from us, from you ... we are a nation that broke the enemy's plans in a week — plans those have been built for years," he said in a Facebook post.

The latest assessments on the convoy comes after the Russian military issued its first casualty figures from the war, saying 498 of its troops had died and another 1,597 had been injured. The UK statement on Thursday said "the actual number of those killed and wounded will almost certainly be considerably higher and continue to rise."

But Russia appeared to be meeting less resistance in southern Ukraine, where the mayor of the strategically important city of Kherson on the Black Sea indicated that Russian forces had seized control, though claims remain disputed.

And the crucial southeastern Ukrainian city of Mariupol came under siege from Russian forces Thursday, as Moscow seeks to tighten its grip on the south of the country.