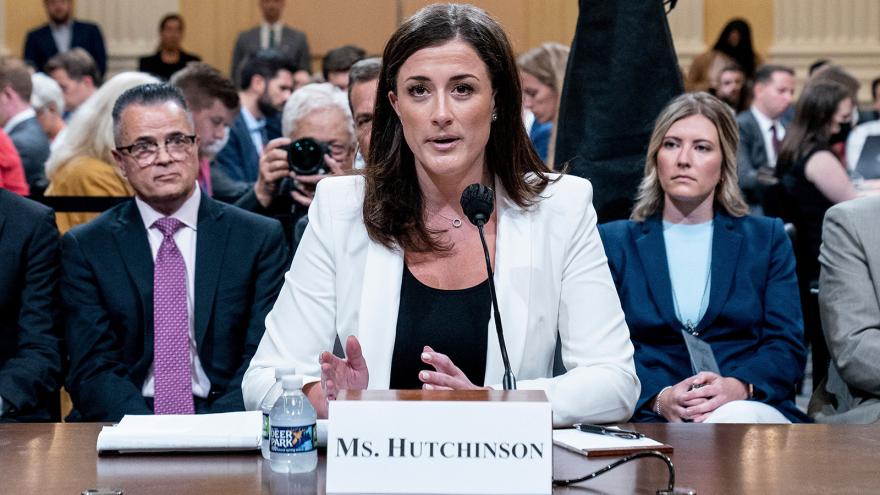 (CNN) -- In its six hearings so far, the House select committee investigating January 6, 2021, has focused squarely on former President Donald Trump, connecting his role in efforts to overturn the 2020 election to the violent attack at the US Capitol.

Through nearly 20 hours of public hearings, the committee has heard live testimony from more than a dozen witnesses and played clips from the recorded depositions of more than 40 others, including members of the Trump family, former administration officials, GOP officials from key battleground states and members of the former President's legal team.

Almost all the witnesses featured so far are Republicans. The committee has sought to use their testimony to demonstrate how Trump was told repeatedly that the election was not stolen, and yet he continued to plot for how to stay in power and that he knew the protesters who showed up in Washington on January 6 were armed. Trump not only urged them to march on the Capitol but had hopes of joining them.

Ahead of Tuesday's hearing, which is slated to focus on the role of domestic extremist groups, here are some highlights of what the committee has uncovered so far.

No evidence of election fraud

The committee has presented testimony from several witnesses, including former Attorney General William Barr and members of the Trump campaign, who made clear that those around the former President told him he lost the 2020 election.

The panel showed video clips from its deposition of Barr in which he detailed why Trump's fraud claims were "bogus" and stated unequivocally that he has seen nothing since to convince him there was fraud.

It wasn't just Barr telling Trump that his election theories were false. The committee has rolled out numerous examples of Trump advisers, White House officials and campaign staffers telling the former President and his allies that their claims of a rigged election were baseless.

Despite these repeated warnings, Trump and some of his allies continued to push these false claims all the way through January in what the committee has attempted to show was a bad faith effort to overturn the election.

The committee has used its public hearings to show how Trump used the power of the presidency to pressure officials at nearly every level of government to join his scheme to overturn the 2020 election.

Many were fellow Republicans who refused to help upend Joe Biden's legitimate electoral victory in key battleground states -- recognizing that what Trump was asking them to do was likely unconstitutional and potentially illegal.

Georgia Secretary of State Brad Raffensperger, his deputy Gabe Sterling and Arizona House of Representatives Speaker Rusty Bowers testified to the committee about how they resisted when Trump contacted them about participating in legally dubious schemes that would undermine the election, including efforts to subvert the Electoral College with fake pro-Trump electors.

"I told them I did not want to be used as a pawn," Bowers said at a hearing last month, recalling what he told former Trump attorney Rudy Giuliani and the then-President on a phone call weeks after Election Day.

The committee also illustrated the impact of Trump's arm twisting by bringing forward Georgia election workers Wandrea "Shaye" Moss and her mother Ruby Freeman, who shared gripping testimony about how their lives were upended because Trump and Giuliani falsely claimed they were involved in an election fraud scheme.

According to witness testimony, Pence himself and Eastman, the lawyer who concocted the scheme advised Trump directly that the plan was unconstitutional and violated federal law. Committee members argued that this shows Trump's corrupt intentions and could lay the groundwork for a potential indictment.

While Pence has not appeared before the panel, two of his closest advisers -- former attorney Greg Jacob and retired Republican judge J. Michael Luttig -- testified publicly about how they advised the former Vice President that he did not have the authority to subvert the election.

Luttig, said that he "would have laid my body across the road" before letting Pence illegally overturn the election.

In a videotaped deposition played during the same hearing, Pence's former chief of staff Marc Short also said the former vice president advised Trump "many times" that he didn't have the legal or constitutional authority to overturn the results while presiding over the joint session of Congress on January 6 to count the electoral votes.

Eastman emailed Giuliani a few days after January 6, 2021, and asked to be included on a list of potential recipients of a presidential pardon, the committee revealed during one of its hearings.

The committee said Eastman made the request to Giuliani in an email.

"I've decided that I should be on the pardon list, if that is still in the works," the email from Eastman to Giuliani read.

Eastman did not ultimately receive a pardon and refused to answer the committee's questions about his role in efforts to overturn the 2020 election, repeatedly pleading the Fifth during his deposition.

"I'm gonna give you the best free legal advice you're ever getting in your life. Get a great effing criminal defense lawyer. You're gonna need it.' And I hung up on him," Herschmann told the panel, according to a clip from his deposition played during one of the hearings.

Other GOP officials who were willing to aid Trump's efforts to overturn the election also acknowledged after-the-fact their involvement may have been criminal.

Some of those lawmakers, including Perry, have since denied seeking a pardon but, at the same time, have also refused to cooperate with the committee.

Trump's attempts to enlist the DOJ

The committee has also detailed Trump's attempts to enlist the DOJ in his efforts to claim the election was rigged and sought to replace his attorney general for not bending to his will.

Public testimony by former Acting Attorney General Jeffrey Rosen, and Donoghue, his deputy, and previous interviews with the committee underscored the lengths Trump was willing to go in order to overturn the election and how he may have succeeded if not for the courage of public servants like them willing to stand in his way.

Trump's intentions were laid bare by Donoghue who recalled a 90-minute phone call in late December 2020 where Trump told him "just say it was corrupt and leave the rest to me and the Republican congressmen," according to notes he shared with the committee.

Trump eventually sought to replace Rosen with Jeffrey Clark, an environmental lawyer at the DOJ who was in Trump's good graces because he was willing to use the powers of federal law enforcement to back Trump's baseless claims. Clark was also recommended by Perry, who CNN has previously reported was involved in nearly every part of the effort to overturn the election on Trump's behalf and was in direct contact with then-White House chief of staff Mark Meadows.

In one high-stakes Oval Office meeting in late December 2020, Donoghue and Rosen eviscerated Clark's credentials and threatened to resign. Trump never went through with the plan.

Federal authorities raided Clark's home on the morning before the committee's hearing focused on his role in Trump's pressure campaign against DOJ officials.

Testimony from Trump White House aide Cassidy Hutchinson revealed that Trump knew protesters coming to the Capitol on January 6 were armed, and yet he wanted them to attend his rally and even join them at the Capitol.

When Trump was told armed individuals were not being let into his rally Hutchinson said he instructed staffers to "take the mags away" -- referring to the metal detectors -- because the people in the crowd were "not here to hurt [him]."

The committee also revealed a mix of witness testimony and White House records to show not only did Trump intend to join his supporters at the Capitol but also that people around Trump had advance knowledge of this plan.

Hutchinson shared under oath that Trump's deputy chief of staff, Tony Ornato, told her that Trump was so enraged at his Secret Service detail for ultimately blocking him from going to the Capitol on January 6 that he reached to the front of his presidential vehicle, tried to grab at the steering wheel with one hand and lunged at his lead Secret Service agent, Robert Engel, with the other. Hutchinson testified that when Ornato, who witnessed the event, relayed the story to her Engel was in the room.

Engel and Ornato have both testified to the committee behind closed doors, but their statements have not been used in a hearing.

The Secret Service, through the Department of Homeland Security Office of Legislative Affairs, notified the committee after Hutchinson's testimony that it will make the agents involved available to testify under oath, the official said. The agents are also prepared to say under oath that the incident itself did not occur.

Trump made no effort to stop or condemn the violence

Hutchinson also testified that Trump defended the rioters chanting for the hanging of Pence on January 6.

Hutchinson relayed a conversation she observed between White House Counsel Pat Cipollone and Meadows after they discussed with Trump the chants to inflict violence on Pence.

"I remember Pat saying something to the effect of 'Mark, we need to do something more. They're literally calling for the vice president to be f***ing hung,'" Hutchinson recalled.

Meadows replied, "You heard him, Pat. He thinks Mike deserves it. He doesn't think they're doing anything wrong," according to Hutchinson.

Instead of listening to advisers telling him to condemn the violence, Trump issued a tweet criticizing Pence for not having the courage to refuse to count electoral votes, which would have been illegal.

The tweet sent shockwaves through the Trump administration and as a result, members of White House staff, national security administration officials, and Cabinet members resigned.

Trump delivered a speech on January 7, 2021, finally acknowledging that Biden would be inaugurated in part because there was a "large concern" by the White House that Pence and the Cabinet could invoke the 25th Amendment to remove him from power, according to Hutchinson's testimony.