Here's what Joe Biden can actually do about gas prices 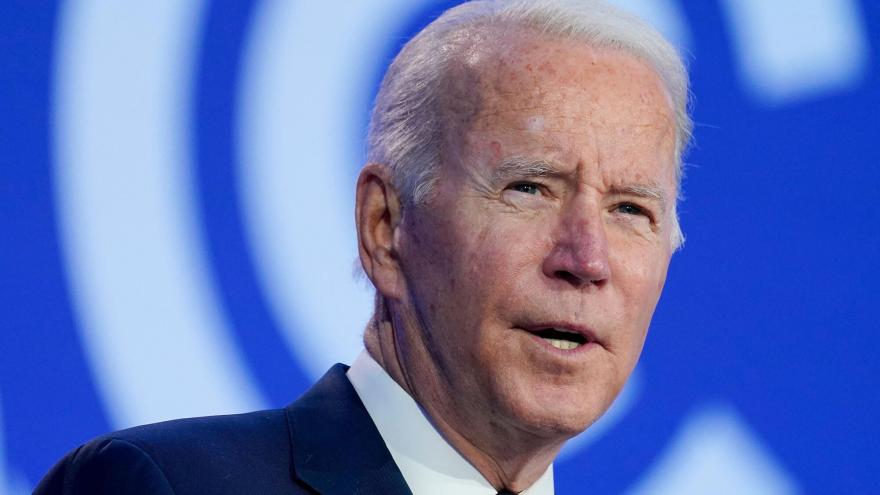 (CNN) -- High gas prices are quickly becoming a political liability for President Joe Biden -- and like presidents before him, he has few options to bring them down.

That doesn't mean he won't take steps to demonstrate his attention to the issue. In fact, he could take action as soon as Tuesday, when a key government forecast on fuel prices is released.

The one option consistently left on the table is tapping into US emergency crude reserves — a step even White House officials privately acknowledge wouldn't have much of an effect.

High gas prices are one of the most frustrating phenomena for any White House because they affect almost every American but are mostly immune from presidential action.

As the global economy rebounds from the pandemic, the price of crude oil is skyrocketing. US gas prices have surged to a seven-year high of $3.40 a gallon nationally and are flirting with $4 in Nevada, Washington and Oregon. The rise in prices comes as demand for oil surges back as the Covid-19 pandemic wanes, outpacing supply.

What are Biden's options?

Energy Secretary Jennifer Granholm told CNN's Dana Bash on Sunday that Biden was "certainly looking" at the Strategic Petroleum Reserve as an option. She said the administration was closely watching the Energy Information Agency report on Tuesday before taking next steps. "The President is all over this," she said, adding Biden was "looking at all of the tools that he has."

Yet for Biden, those tools are somewhat limited -- a fact both the President and the White House have acknowledged in recent weeks.

"There are limitations to what any President can do, as it relates to gas prices," press secretary Jen Psaki said on October 22.

"I don't have a near-term answer," Biden said during CNN's town hall in October.

He sounded slightly more optimistic on Saturday, but declined to lay out what menu of options he was working from.

"There other tools in the arsenal that we have to deal -- and I'm dealing with other countries; at an appropriate time, I will talk about it -- that we can get more energy in the pipeline, figuratively and literally speaking," he said.

The administration has already taken some small steps to control gas prices, including the Federal Trade Commission saying it would investigate potential price gouging.

Nearly a dozen Senate Democrats called on Biden on Monday to fight high gas prices by considering a release of barrels from the nation's emergency oil stockpile, or even taking the more extreme step of banning oil exports.

Aside from tapping the SPR, officials said another option — cutting or banning US oil exports altogether — was unlikely given the furor it would ignite both at home among producers and refiners and abroad among allies. Other options for Biden could include attempting to lower costs for refiners.

Tapping the SPR -- the stockpile of 600 million barrels of crude oil stored in underground salt caverns in Louisiana and Texas -- could have only a limited effect because of how much oil can be released at a time, but would act as a political sign that Biden is confronting the problem.

"The impact of a sale would be short lived, and it is not clear that releasing strategic stocks would help the market to adjust any faster than it would otherwise," wrote Ben Cahill, senior fellow at the Energy Security and Climate Change Program at the Center for Strategic and International Studies.

Goldman Sachs analysts said a release of 60 million barrels "would only be of modest and temporary help." It would reduce Brent prices at the end of this year by only $3 per barrel, and it could discourage US shale producers from increasing their output, leading to higher prices in 2022.

Biden has consulted with counterparts in other non-OPEC nations about potentially coordinating strategic reserve releases as a way of having more of a global impact.

For his part, Biden has blamed "the refusal of Russia or the OPEC nations to pump more oil" as a reason for high gas prices in the United States.

"We'll see what happens on that score sooner than later," he said during a news conference in Scotland last week.

Unfortunately for Biden, what happened was the oil cartel and its partners declined to take up his demand they increase supply. At last week's G20, Biden had made a specific attempt to lobby those countries to increase output. They responded by saying they would stick to their original plan of only slowing ramping up supply.

The White House responded almost immediately, accusing OPEC of placing the "global recovery for countries around the world" in jeopardy.

"We will consider the full range of tools at our disposal to bolster resilience and public confidence," a NSC spokesperson said.