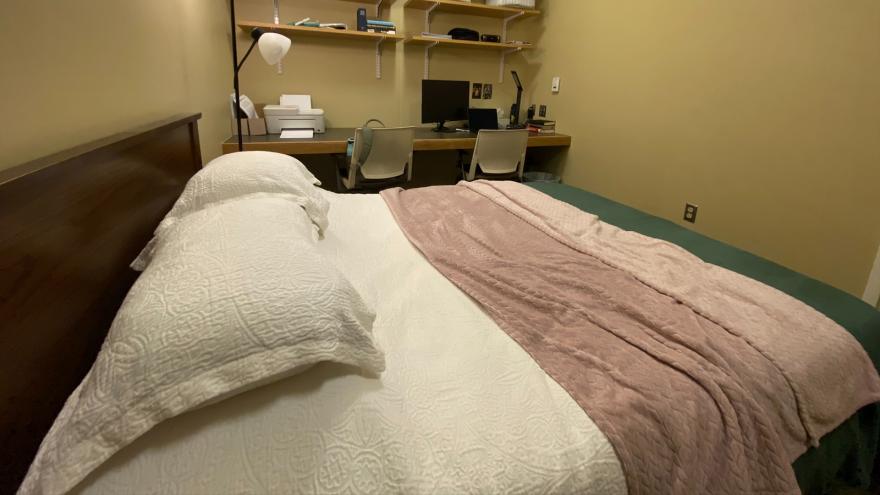 (CNN) -- Billionaire Charlie Munger's controversial plans for a massive, windowless dorm at the University of California, Santa Barbara has left many wondering -- how is this even possible?

The answer is at the University of Michigan, where the Munger Graduate Residence Hall houses more than 600 graduate students in 6 to 7 bedroom apartments. And most of those single-occupancy rooms don't have windows, either.

Public policy graduate student Luiza Macedo didn't see the sun for a full week when she had to isolate in her room at Munger Residence due to a Covid-19 scare.

"That was probably the low point of my experience here. It was being stuck in my room," Macedo said. "A lot of people are incredulous that this was even a thing before all these articles came out about UCSB...like, how is this legal? How are they doing this to us?"

Many students use sun lamps or night lights to create an artificial sense of daytime -- students told CNN Business it's almost impossible to get by without one.

Munger, 97, is Warren Buffett's right-hand man and an amateur architect. He has no formal education in the field.

He attended the University of Michigan and donated the majority of his $110 million gift to fund his vision of the $185 million dorm. At that time in 2013, it was the largest single donation the school had ever received. Michigan promoted the building as a "community of scholars," where graduate students of different disciplines constantly interact with each other in common areas, where there are windows.

His controversial plans for Munger Hall at UCSB — an 11-story building that would provide almost 4,500 windowless beds for undergraduates — led a consulting architect to quit in October. Munger donated $200 million to UCSB to fund the dorms, with the stipulation that his designs are followed.

"When an ignorant man leaves, I regard it as a plus not a minus," Munger said about the consulting architect in an interview with CNN Business Monday. "He's just plain wrong."

"I was (at the University of Michigan) last month, you never saw a happier bunch of students and it has a very similar design," Munger said. "So all I can say is that I have been doing this for a long time and no building has failed yet."

Unlike Michigan, the rooms at UCSB would have artificial windows meant to imitate fake portholes on Disney Cruises.

"It was a mistake on my part, not to put these artificial windows into Michigan," Munger said in an interview with CNN Business Monday.

Macedo doesn't spend much time in her room, which costs around $1,000 a month. Instead, she studies facing windows on the top floor -- but that's not because she wants to collaborate with anyone.

"Mental health far outweighs the desire for people to collaborate or whatever that goal is," Macedo said. "I would much rather not have depression than collaborate with my peers."

Some students have gotten used to living without a window in their room.

"I wasn't sure how living in a bedroom with no window was was going to work out but for me, at least, it's really no big deal," graduate student Sabrina Ivanenco said. "I think that once you exit your bedroom, you have a very beautiful living space."

In fact the building has a rating of 8.8 out of 10 on veryapt.com. Reviewers praise the building's amenities, including study rooms and a fitness center. And each room has a queen-sized bed and its own bathroom, with common space that features a large kitchen, living room, dining area and natural light. But plenty of commenters also bemoan about the lack of windows.

James Wyatt, the chief of behavioral sleep medicine at the Rush University Medical Center, said college students are already at the most vulnerable age bracket for a disrupted circadian rhythm. And artificial windows are merely "a proxy," he said.

"It was just staggering to me to take this vulnerable population of young adults and expose them to an environment depriving them of daily time cues of the light dark cycle," Wyatt said. "It is absolutely in my opinion, as a scientist with decades studying these issues, reckless."

Lindsay Stefanski, the assistant director of graduate academic initiatives, said Munger has multiple community-building events in place, such as yoga on the roof, to encourage well being. Students have access to 24-hour mental health resources and the hall had partnered with the university's counseling and psychological department to provide SAD lamps, which stimulate sunlight.

"The feedback has just been phenomenal," Stefanski said. "Students appreciate those opportunities to get out of their silos and connect with each other in those larger common spaces."

UCSB said in a statement Friday that the project and design of the building will go forward as planned.

Munger has also designed a dorm at Stanford University and a library with removable walls at Harvard-Westlake School in Los Angeles. But he has no plans to bring his dorm designs to other universities.

"No, I won't do it. I'm ready to die very shortly," He said. "But I do expect this dorm will be copied four more times on the USCB campus and many more times than that on the other campuses on the UC system and I expect this to spread all over the country. It's a better mouse trap."

Louise Batta, a PhD student, disagrees. She wasn't aware her room wouldn't have windows -- she said there were no pictures on the website, and due to Covid she couldn't tour in person. Batta said she immediately began getting headaches because of ventilation issues.

"It's completely thrown off my circadian rhythm. It's hard to get up in the morning to go out of bed because I never know what time it is," Batta said. "I know that people joke all the time about how bad the living situation is, but it has truly had a negative impact on my grad school experience."

Batta is attempting to break her lease.

"I haven't heard any birds since I came up here because I don't have a window. I can't wake up to birds," Batta said.